Last week U.S. President Joe Biden issued an executive order that sets the stage for sweeping climate-related disclosure requirements and standards. S&P Global Sustainable1 views this as an important step to ensure the U.S. government is a taking an active role in helping the financial sector as well as companies, local governments and at-risk communities understand and address these growing risks.

Climate change comes with steep economic costs. Almost 60% of the companies in the S&P 500 have at least one asset at high risk of physical climate change impacts, according to S&P Global Trucost data.

What’s more, in 2020 the U.S. broke an unsettling record, experiencing 22 extreme weather and climate change-linked disasters that each cost in excess of $1 billion, according to figures recently published by the National Oceanic and Atmospheric Administration. Those events collectively caused at least $95 billion in damages, killed at least 262 people and injured scores more. Prior to 2020, the largest number of annual major disasters was 16. Scientists project that as average global temperatures continue to rise due to human-caused greenhouse gas emissions, the number and intensity of extreme weather events will rapidly increase.

A 2020 report by S&P Global Ratings found that water stress will affect 38% of counties in 2050 under a high-stress climate scenario, raising risks under this scenario for their municipal water utilities, public-owned power utilities, and local governments. Heat wave risk will continue to increase across all states and under all scenarios to midcentury with Florida particularly exposed.

Extreme weather events could also have a significant impact on property values. In a recent analysis, S&P Global Ratings applied several climate scenarios using Trucost's Climate Change Physical Risk data to 11,501 properties backing U.S. CMBS transactions that it rates. The analysis found that about 5% of those properties are already highly exposed to wildfire; 99% of the highly exposed assets are spread across 10 states, with most of the risk concentrated in California.

Biden’s executive order builds on growing momentum among U.S. financial regulators who have begun taking steps to address climate change. A 2020 report commissioned by a subcommittee of the Commodity Futures Trading Commission (CFTC) called climate change a "major risk" to the stability of the country's financial system and the broader economy. For the first time in 2020, the Federal Reserve cited the threat of climate change in its biannual Financial Stability Report and said it expects banks to address systemic risks posed by rising global temperatures. Late last year, the Fed also joined the Network for Greening the Financial System, a group of central banks and supervisory authorities from around the world that are collaborating to develop climate risk management tools for the financial sector.

Wall Street’s main regulator, the U.S. Securities and Exchange Commission, has also made initial steps toward requiring publicly traded companies to disclose their climate risks. The agency in February ordered a review of corporate climate-related financial disclosures and said it plans to update a decade-old guidance document as a precursor to launching a formal disclosure rulemaking in the future.

Financial institutions in the U.S. and globally have an essential role to play in addressing climate change — a fact that was underscored in April when 43 banks from 23 countries with $28.5 trillion in assets joined the newly-created United Nations-backed Net-Zero Banking Alliance, part of the Glasgow Financial Alliance for Net Zero. 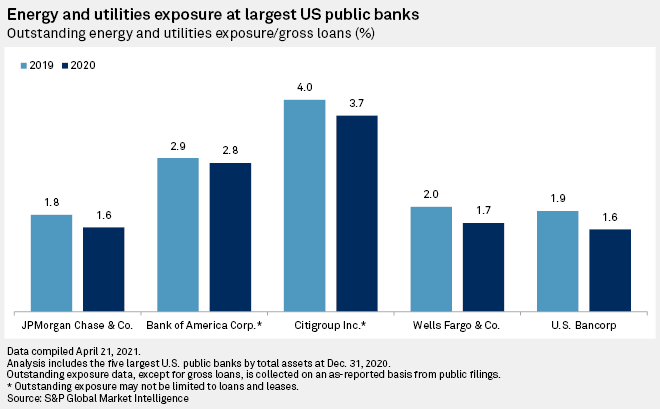 Over recent months, we’ve seen major financial institutions up the ante by setting a host of net zero commitments. In March, U.S. giant Wells Fargo announced a goal to achieve net zero emissions by 2050, following hot on the heels of announcements from other major U.S. banks like Goldman Sachs and Citigroup.

S&P Global Market Intelligence data shows that the five largest U.S. public banks reduced their exposure to energy and utilities in 2020 compared to 2019. With this latest executive order putting increased emphasis on the financial risks of climate change, we expect this trend away from financing fossil fuels to continue.