A proposed EU Green Bond Standard seeks to cement Europe's leadership in the green debt market by creating a go-to European standard, but it may find limited appeal among international issuers unable to comply with the bloc's strict new rules defining what is "green."

The proposal, born out of 2019 recommendations by an EU advisory group, aims to create what the EU terms "a gold standard" for the market,. The proposed EU Green Bond standard would be voluntary but its requirements will be stricter than existing market guidelines. Notably, under the proposal issuers opting in to the standard would have to demonstrate that their green bonds are financing projects in line with the EU's "green taxonomy," which is, simply put, a dictionary of sustainable activities. 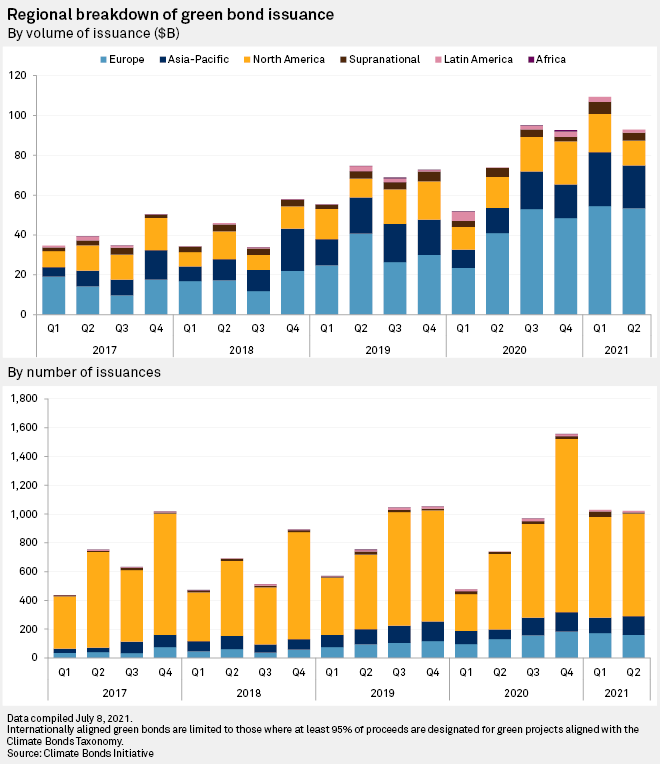 Some market participants say that could hinder the voluntary standard's uptake. The International Capital Markets Association, which has its own green bond guidelines known as the Green Bond Principles, said the taxonomy's complexity, coupled with the fact that some of the regulation related to the taxonomy has yet to be finalized, would act as a deterrent for the proposed standard, especially for non-EU issuers.

But other market participants say that the taxonomy will set a common language and boost growth in Europe, the world's largest green bond market.

Although they represent a tiny fraction of the overall debt market, green bonds — debt that finances environmentally friendly projects such as wind farms or solar power — have flourished over the last decade. While the market was worth virtually nothing 10 years ago, total issuance currently stands at nearly $1.3 trillion, according to the Climate Bonds Initiative, a U.K. nonprofit that promotes sustainable investment.

Europe has helped drive that growth. Second-quarter European green bond issuance stood at $53.37 billion, up 30% year over year. That helped push global issuance to $202.09 billion in the first half of 2021, accounting for more than 60% of the $313.42 billion of bonds sold in all of 2020, Climate Bonds Initiative data showed.

The EU estimates it will need €350 billion to meet its target of reducing greenhouse gas emission by 55% by 2030, and a further €130 billion for other environmental goals. It also aims to achieve net zero carbon emissions by 2050. The EU is counting on the private sector to fund those objectives, and for that, it needs European companies to increase green bond issues. 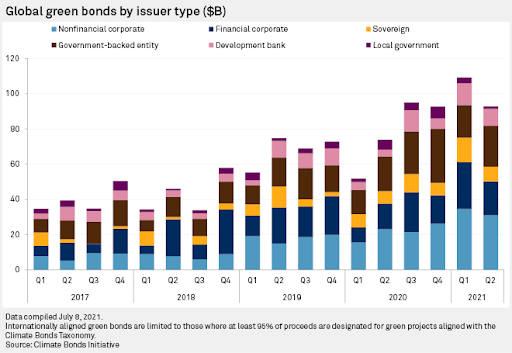 To help it meet its goals, the EU has ushered in a set of rules to promote sustainable finance. The so-called Taxonomy Regulation was created as a way to define environmentally friendly investments. It assesses more than 100 economic activities — spanning manufacturing to transport to insurance — and is designed to steer companies as they adapt their business strategies to climate change, as well as to guide investment funds in determining the environmental performance of certain sectors.

Asset managers and owners are increasingly taking notice of the taxonomy because of its links to the EU Sustainable Finance Disclosures Regulation (SFDR). By Jan. 1, 2022, financial market participants operating within the EU will have to explain how they use the taxonomy to determine the sustainability of their investments. They will also have to disclose what percentage of their investments are in line with the taxonomy. The new SFDR is expected to radically change how investors and companies report on their environmental performance.

The role of the taxonomy

Under the new proposed standard, the European Commission said companies could issue bonds to finance the conversion of a production facility such as a steel plant to reduce emissions and meet taxonomy thresholds. Firms could also finance the acquisition or construction of assets, such as an energy-efficient building, with an EU green bond to increase their alignment with the taxonomy.

Aligning portfolios with the taxonomy is a challenge for investors. Netherlands-based asset manager NN Investment Partners said in a July 19 report that 60% of its green bond portfolio was aligned to the EU taxonomy. Transportation and utilities fared well in the assessment because they issue bonds to finance renewable energy or electric vehicles. Banks, on the other hand, may not have enough information about the projects their green bonds are financing to ensure they are in line with the taxonomy. Sovereign issuers also fared badly because some of their projects do not specify exactly where the proceeds will be directed, the asset manager said.

According to Sean Kidney, Climate Bonds Initiative CEO, using the Green Bond Standard in conjunction with the taxonomy should boost green bond market growth. Kidney worked with the EU advisory group on creating the standard.

Listen to an interview with Sean Kidney, Climate Bonds Initiative CEO Sean Kidney on this episode of ESG Insider, a podcast hosted by S&P Global Sustainable1

"The more we have a common language across markets...the faster things grow because you just take out a lot of confusion," Kidney said.

"It's no longer about issuers or for that matter, investors having to decide their own rules, especially in an area where they're not particularly skilled, which is around climate science, but they're now using a rule set that's provided and comparability comes in, it's easier to have a big portfolio because everything going into the portfolio is using the same rule set, all of these things is commoditization are critical factors in growing a market."

"I understand people concerned about complexity at this stage. But I'm going to say that will be way, way, way trumped by the benefits of a common language and the commoditization of definitions here, and that's what we're going to see," he said. 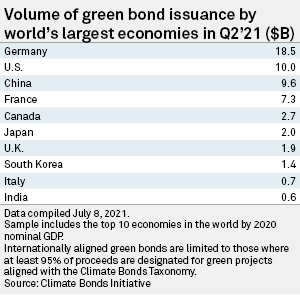 Green bond issuers currently use voluntary guidelines, like ICMA's Green Bonds Principles or the Climate Bond Standards from the Climate Bonds Initiative. Both provide issuers with lists of projects and assets that can be defined as green bonds. They also provide a framework for how the proceeds are used.

There are other regional standards as well. China has its own guidelines for issuing green debt. Those are being updated to exclude clean coal from the list of projects that qualify as green bonds, to attract more interest from international investors. The ASEAN Capital Markets Forum, a group of capital market regulators from Singapore, the Philippines and eight other southeast Asian countries has its own ASEAN Green Bonds Standards that were developed with ICMA.

The EU's proposed rules for a voluntary EU Green Bond standard are slightly stricter than some other standards in existence. The European Securities Markets Authority would supervise external reviewers of any EU Green Bonds under the proposed standard. Other green bond standards require external reviewers, independent experts who verify the "greenness of a bond," however they are not required to be regulated.

One of the goals of the new EU regulations is to prevent greenwashing, a practice of making an investment sound more sustainable than it is actually is.

Kidney, however, said there was already a high degree of transparency in the market, with issuers acting in line with existing market guidelines.

Not everyone has the same idea of green and not all countries' climate plans are on the pathway to successfully achieve the 1.5-degree scenario set out in the 2015 Paris agreement on climate change, he noted. But the taxonomy should change that, he added.

"The taxonomy is now the reference. It wasn't there before. And that's changing the discussion everywhere," he said.