In his first 100 days in office, U.S. President Joe Biden took a host of actions to keep sustainability issues at the heart of his regulatory and legislative agenda.

By issuing dozens of executive orders, working with lawmakers on legislation and choosing sustainability-minded cabinet members to carry out his goals, Biden has maintained the focus on climate change that he outlined during his campaign.

He has also taken steps to tackle racial and social inequality through environmental justice initiatives during his first months in office, making “equity for all" a policy goal of his administration.

But much of that agency-level work is in the early stages and will take years to carry out. And the price of transitioning to a greener, more just economy in line with Biden’s goals is likely to be steep

The outlook for disclosure

Financial regulators are among the agencies helping Biden take a whole-of-government approach to addressing the risks climate change poses to the U.S. economy and financial markets.

Since Biden took office, regulators at the Securities and Exchange Commission, the Commodity Futures Trading Commission and the Federal Reserve have taken multiple steps to address the growing threat that climate poses to the economy.

The SEC, Wall Street’s top regulator, plays a critical role in determining which disclosures are mandatory and how companies engage with their shareholders. And the agency has been especially active on the ESG front. Just this year, the SEC created the role of senior policy adviser on climate and ESG; launched a task force to weed out ESG-related fraud; and beefed up its examinations of whether companies' business continuity and disaster recovery plans are factoring in extreme weather threats. The SEC also launched a review of corporate climate-related financial disclosures and has increasingly signaled that a new regime of corporate disclosures around climate and ESG risks is coming.

The moves set the stage for the agency to begin considering a full rulemaking on climate disclosure. Biden pledged on the campaign trail to make companies disclose their climate risks and emissions levels. In April, U.S. climate envoy John Kerry said that the nation would likely join Europe in mandating that financial institutions and companies disclose climate change risks and work with European leaders to harmonize disclosure standards.

“Europe tends to be more regulatory, we tend to be or hopefully are more incentive-based, but disclosure I think is here to stay,” Kerry said. 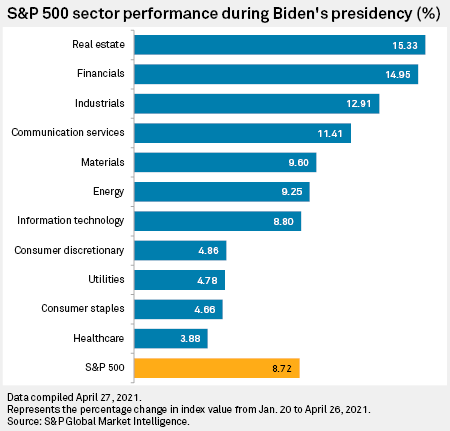 Kerry made the remarks during a two-day climate summit that Biden convened earlier this month in pursuit of his climate agenda. At the event, some of the world's top emitters reaffirmed or raised their targets for greenhouse gas emissions cuts.

During the summit, Biden announced that the U.S. will significantly toughen its emissions targets under the Paris Agreement on climate change after officially reentering the worldwide pact in February. As part of a new nationally determined contribution (NDC) to the Paris deal, the U.S. will reduce net greenhouse gas emissions by 50% to 52% from 2005 levels by 2030. A White House official also indicated that the U.S. National Climate Task Force will be outlining a sector-by-sector climate strategy later this year.

In recent years, the transportation sector has been the No. 1 contributor to U.S. greenhouse gas emissions even as the U.S. power sector has seen its emissions levels decline due to switching from coal-fired generation to renewables and natural gas plants. Big challenges also remain to decarbonize other sectors including industrial, agriculture, commercial and residential. 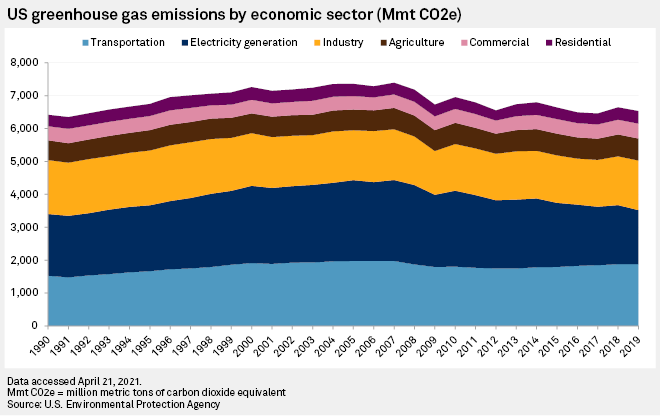 A number of other federal regulatory agencies are also playing a critical role in helping Biden implement his ESG-centric agenda.

The Environmental Protection Agency, which oversees implementation of the nation’s bedrock environmental laws, is in the process of strengthening its regulations involving emissions from the transportation and energy sector, including methane emissions.

The U.S. Department of Energy is moving to fund and also carry out research and development aimed at bringing down the cost of low-carbon technologies that will be critical to Biden’s aggressive decarbonization goals.

Energy Secretary Jennifer Granholm has said the agency is focusing on things like deployment of offshore wind, funding opportunities to reduce methane emissions, and incentives to create next-generation biofuel for airplanes and ships. The department is also looking to build out the domestic supply chain on things like electric vehicle batteries to help carry out Biden’s campaign pledge to create more U.S. jobs while tackling climate change.

These technologies are likely to carry a huge price tag, even with the cost improvements the DOE is seeking. And the sustainable debt market could help play a role in financing these changes. For example, S&P Global Ratings anticipates that the transition finance market, which can help less-green industries become more sustainable, could constitute one-third of all green finance during the next decade. S&P Global Ratings found that sustainable debt — which includes green, social, sustainability and sustainability-linked bonds — increased by more than 60% in 2020, and forecast that issuance will total more than $700 billion by the end of 2021.

Biden’s actions on climate issues have not been limited to domestic policy. He immediately starting the process to reenter the U.S. in the Paris Agreement on climate change. He also appointed John Kerry Special Presidential Envoy for Climate and tasked Kerry with reaching out to some of the top carbon-emitting countries to restore climate discussions dropped during Trump’s term.

For example, Kerry in mid-April met with China's special climate envoy Xie Zhenhua to discuss how the two nations can cooperate on reducing emissions. China, now the world's largest greenhouse gas emitter, is already in the midst of implementing a cap-and-trade scheme. The nation also announced in fall 2020 that it aims to become carbon-neutral by 2060.

After the meeting, the two nations agreed to work together to take "enhanced climate actions that raise ambition in the 2020s," Kerry and Zhenhua said in a joint statement. 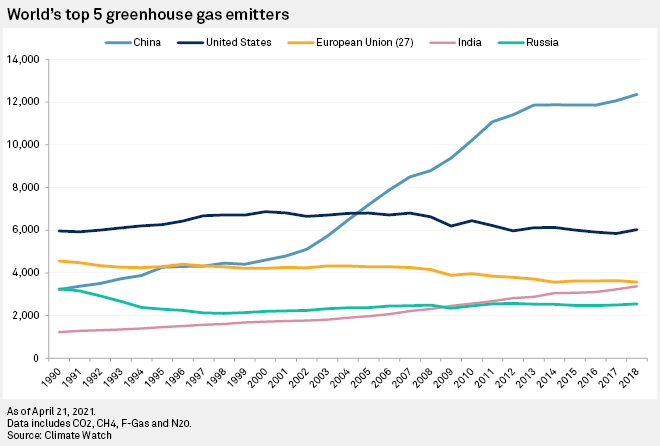 How environmental justice fits into Biden’s plan: The overlap between the ‘E’ and the ‘S’

Biden has made clear that any successful plan to combat climate change needs to address both environmental and social concerns.

In his first day in office, Biden ordered federal agencies to advance "equity for all, including people of color and others who have been historically underserved, marginalized, and adversely affected by persistent poverty and inequality."

Since then, he has taken various steps to follow through on a campaign pledge to make environmental justice a key part of his climate plan and to pursue a just transition for workers. He created a National Climate Task Force as well as White House interagency and advisory councils on environmental justice, and instructed government to put renewed efforts into addressing environmental justice associated with implementing and enforcing federal laws.

Following up on that directive, EPA Administrator Michael Regan on April 7 noted that many minority, indigenous and low-income communities "suffer from disproportionately high pollution levels” and Regan instructed staff to improve engagement with those groups with earlier and more frequent meetings during the regulatory process.

Biden also created an Interagency Working Group on Coal and Power Plant Communities and Economic Revitalization. The goal of the group is to ensure that communities that have been dependent on fossil-fuel jobs and related tax revenues will not be left behind as the nation transitions to a low-carbon economy.

Biden and his top climate advisers emphasized that they expect to find a role in the climate plan for former fossil-fuel industry employees.

"A key plank of our Build Back Better Recovery Plan is building a modern, resilient climate infrastructure and clean energy future that will create millions of good-paying union jobs — not $7, $8, $10, $12 an hour, but prevailing wage and benefits," said Biden. He said millions of Americans can have jobs working on modernizing water systems, transportation, and energy infrastructure to withstand the impacts of climate change.

Biden also suggested that his directive to federal agencies to procure carbon-free electricity, buy American-made products, and switch to zero-emission vehicles, can produce 1 million jobs in the auto manufacturing industry. And he said another 500,000 jobs will be created to do things like plugging millions of abandoned oil and gas wells.