Governments around the world have started to make climate-risk reporting mandatory instead of voluntary, unleashing a complex accounting-style challenge that many businesses, asset managers and banks will have to address in the near term.

Several climate risk reporting frameworks exist, but the one that many policymakers have endorsed is the Taskforce on Climate-related Financial Disclosures, or TCFD. The taskforce designed standardized guidelines to help organizations disclose material climate risks, explain their plans to manage exposure, and describe how the shift to a zero-carbon economy would affect their operations. In other words, the TCFD is a way for a company to look under the hood of its operations and determine what impact its activities are having on the climate, and, in turn, what impact rising temperatures could have on its business.

In April 2021, New Zealand became the first country to introduce mandatory TCFD "comply or explain" disclosure for financial institutions, whereby about 200 large financial institutions would make climate-related disclosures starting in 2022. Another early mover, the U.K., has declared that it will make TCFD-aligned disclosures mandatory across the economy by 2025, with many of the requirements in place by 2023.

Hong Kong has also set a date of 2025 for its mandatory TCFD plan, while Switzerland has said it will enshrine TCFD reporting into law and make it "binding." Canada tied pandemic bailout funding to TCFD-aligned disclosures, and the Bank of Canada has said it is "working towards aligning its future disclosures" with the guidelines.

The European Union has not officially adopted the TCFD for its member countries, but it is implementing the Sustainable Finance Disclosure Regulation (SFDR), which has a broader reach than the purely climate-focused TCFD. The U.S. is lagging, but interest from policymakers is growing. In March 2021, the Securities and Exchange Commission asked for public input about climate change disclosures, including the TCFD. And in remarks made to the Institute of International Finance in April 2021, U.S. Treasury Secretary Janet Yellen indicated her backing for sustainability reporting, and singled out the TCFD.

"Momentum behind the TCFD is also demonstrated by several jurisdictions moving towards mandatory climate reporting in alignment with the TCFD, as well as the support of 110 financial regulators including 50 central banks," Yellen noted.

But perhaps the strongest signal for compulsory TCFD disclosure came in June 2021, when the G7 group of countries said they backed the idea. "Investors need high quality, comparable and reliable information on climate risks," the G7 finance ministers and central bank governors said in a statement. "We therefore agree on the need for a baseline global reporting standard for sustainability, which jurisdictions can further supplement.”

In June, the TCFD organization proposed new guidelines aimed at strengthening its framework. For example, it proposed seven cross-industry, climate-related metrics, which, it argues, “are key to understanding climate-related risks and opportunities both by users assessing individual companies; those aggregating risks across companies within their investing, lending, or underwriting portfolio; and by regulators looking to assess systemic risks.”

Three powerful sets of market stakeholders are driving the shift to mandatory reporting: Investors, who increasingly want greater clarity about their exposure to the risks of climate change; financial hubs such as London and Hong Kong, which want a foothold in the nascent but promising market for climate-linked securities; and governments, such as that of New Zealand, which consider TCFD reporting to be vital in the broader quest to reduce corporate emissions.

"You have a blizzard of regulation and policy coming down the line, certainly over the next five years, and I don't see it letting up in many jurisdictions," says Matthew Townsend, partner at U.K. law firm Allen & Overy. "Part of that is... if you want to label a structured fund or equity as 'green,’ you need to have the data" from companies, which a TCFD mandate can provide. 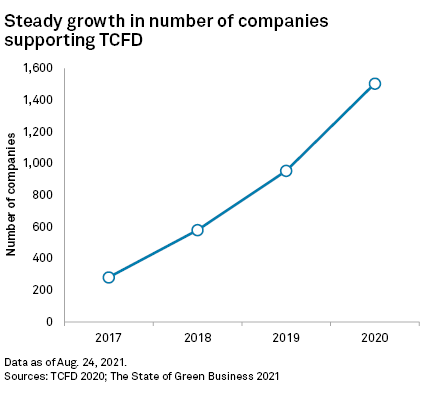 The number of corporations supporting the TCFD has jumped more than five-fold from 282 in 2017 to 1505 in 2020, according to The State of Green Business 2021 report, published jointly by S&P Global Trucost and Greenbiz Group. Among sectors, financial firms are the biggest backers of the TCFD. Across regions, 38% of the supporting companies are in Europe, 30% in Asia and 21% in North America.

But it’s important to note that supporting the TCFD isn’t the same thing as actually making climate-related disclosures. According to the 2020 TCFD status report on about 1,700 public companies for the 2017-2019 period, "companies' disclosure of the potential financial impact of climate change on their businesses, strategies, and financial planning is low." For example, only one in 15 companies disclosed information on the resilience of its strategy under different climate-related scenarios. 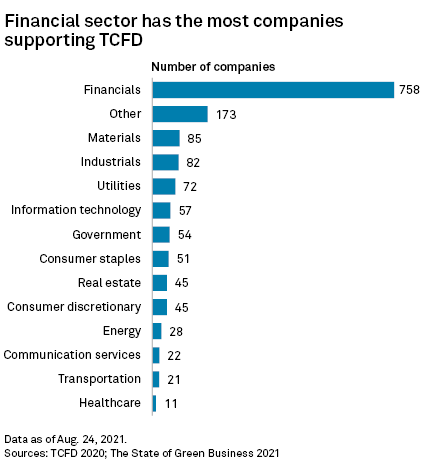 A big reason that many companies struggle with TCFD implementation is because it's hard to collect, collate and analyze detailed, emissions-related data in all areas of their operations. Companies also need to train their employees on technical aspects of reporting under the framework. Above all, TCFD implementation must be roundly embraced and instilled — all the way from the C-suite to product- and client-teams. And that all takes time.

"It's very much a marathon, not a sprint," said Thora Frost, senior manager of green finance at the Carbon Trust, a London-based consulting firm that works on climate change and sustainability issues. 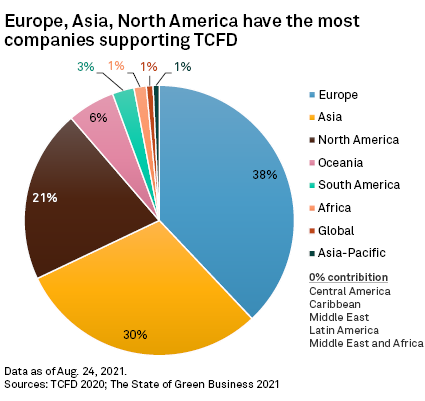 Verizon Communications Inc. has described the arduous process behind its first TCFD report, published in 2019. In a case study done with Accounting for Sustainability, a group that works with finance leaders to help companies adopt sustainable business models, Verizon said the first move was to talk to investors, who wanted the company’s TCFD climate reporting to specifically "highlight the resilience and efficiency of our network.” The telecommunications provider then identified gaps in its climate reporting. That meant scrutinizing existing reports and disclosures in sustainability statements and proxy statements, reviewing board meeting agendas, and studying policy statements.

It then got crucial backing from the board of directors. That "helped us to get the widespread internal buy-in that we needed," Verizon noted. "For example, to prepare the risk management and strategy sections, we interviewed people from teams including business continuity planning, finance, network engineering, product development, public policy, real estate, internal audit, risk management and strategy." Verizon's CFO also worked closely with the company’s ESG team on how to set, measure and report against the company's climate commitments. Various subject matter experts then reviewed and signed off the relevant sections of the report before it was presented to the disclosure committee for approval.

Verizon’s final 21-page TCFD report disclosed several important climate-related risks facing the company, such as how higher fuel or energy prices in the U.S. and Europe could make it more expensive to power its networks and data centers. Another topic was acute physical risk. "There is a potential negative impact on market share/sales if Verizon is unable to respond adequately to adverse weather situations that could impact our services," the case study stated. In its TCFD report, Verizon also disclosed the time frame for certain climate-related actions it planned to take, such as cutting emissions, reducing carbon intensity and buying or generating renewable energy.

The TCFD document offers "a comprehensive view into how we understand and manage the risks and opportunities associated with climate change at Verizon," the company said in its report. "This disclosure is an initial step on our journey."

But for every company like Verizon that has embraced the TCFD, there are many more  that have yet to take the plunge. And that may explain why many governments are gearing up to make TCFD reporting compulsory.

"There is a limited benefit to a first mover in this area, because there is a cost associated with integrating this and providing this information to the market," explains Frost of Carbon Trust. "There's also a risk around … having to disclose something that's not great for the value of your business ... if the climate risk assessment is negative. Making everyone do it at a similar point of time is potentially needed to move the agenda."