What is Carbon Pricing?

At COP27, how to make progress in the face of uncertainty


What is Carbon Pricing?

Carbon pricing is an increasingly popular mechanism that harnesses market forces to address climate change by creating financial incentives for companies and countries to lower their emissions — either by switching to more efficient processes or cleaner fuels.

Carbon pricing can take the form of a carbon tax or fee, or a cap-and-trade system that depends on government allotments or permits.

As awareness and support increases around these new instruments, analyses show that carbon pricing could lead to significant costs for companies.

Following the 2015 Paris Climate Agreement, there has been a growing understanding of the structural changes required across the global economy to shift to a low-carbon economy. The increasing regulation of carbon emissions through taxes, emissions trading schemes, and fossil fuel extraction fees is expected to play a vital role in global efforts to address climate change. Central to these efforts to reduce carbon dioxide (CO2) emission is a market mechanism known as carbon pricing.

Set by governments or markets, carbon prices cover a part of a country’s total emissions, charging C02 emitters for each ton released through a tax or a fee. Those fees may also apply to methane, nitrous oxide, and other gases that contribute to rising global temperatures. In a cap-and-trade system of carbon pricing, the government sets a cap on the total amount of emissions allowed, and C02 emitters are either given permits or allowances or must buy the right to emit C02; companies whose total emissions fall under the cap may choose to sell their unused emissions credits to those who surpass its carbon allotment. Either way, carbon pricing takes advantage of market mechanisms to create financial incentives to lower emissions by switching to more efficient processes or cleaner fuels.

Carbon prices have already been implemented in 40 countries and 20 cities and regions. According to a 2019 World Bank report on trends in carbon pricing, a carbon price range of US$40-80 is necessary by 2020 to reach the goals set by the 2015 Paris Agreement. As countries try to limit the average global temperature increase to 2 degrees Celsius, average carbon prices could increase more than sevenfold to US$120 per metric ton by 2030.

In the transition to the a low-carbon economy, carbon pricing could lead to significant costs for companies, amounting to as much as $1.3 trillion from 2030 carbon prices across companies in the S&P 500, according to research from S&P Dow Jones Indices. To account for the additional costs and risks of future carbon pricing, S&P Dow Jones Indices launched the S&P Carbon Price Risk Adjusted Index Series to allow investors to consider 2030 carbon price risk exposures in addition to company earnings in investment decisions. The index series takes into account a company's carbon emissions, operating geographies, and its ability to “pass on” carbon costs to consumers or purchasers.

The implementation of carbon pricing varies from country to country. In Europe, carbon prices under the EU Emissions Trading System (EU ETS) have been steadily rising since 2016, hitting an 11-year high in July 2019. Higher carbon prices could improve profit margins for clean energy generation in Europe, including wind, solar, and nuclear power plants. In the U.K., for example, CO₂ emitters pay more to emit carbon than most of their European counterparts, enabling the U.K. to rapidly phase out coal from power generation. High carbon prices also improve gas-fired profits relative to coal-fired margins, and encourage investment in new technologies like carbon capture. Preliminary data suggests that CO2 emissions under the EU ETS fell 3.9% in 2018. China is another country with a national carbon market in the works. 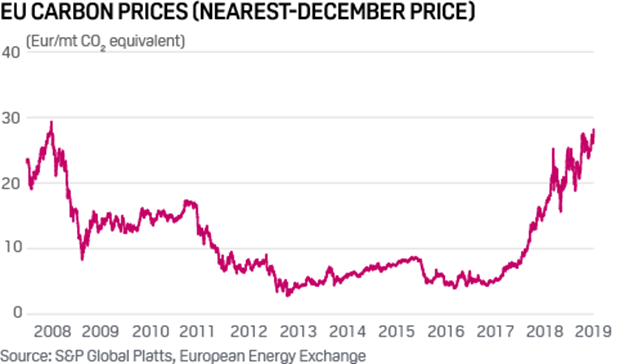 In the U.S., the Climate Leadership Council, which includes major oil, power, and consumer product companies, has called for a carbon tax of $40 a ton. Democratic presidential candidates have also been talking about carbon taxes in the lead up to the 2020 presidential election. At the regional level, 10 U.S. states have active cap-and-trade systems, in which money raised from selling carbon credits to power plants go toward clean energy investments. New York, for example, is considering pricing the cost of C02 emissions into its wholesale electricity market through a carbon adder or a new cap-and-trade program that could help it meet its ambitious clean energy mandates with little impact on consumer prices.

PJM Interconnection, the largest power market in the U.S., began exploring the feasibility of pricing carbon into its power markets and developing a common set of rules to implement carbon pricing and manage cross-border emissions leakage. Emissions leakage results from emitters shifting their carbon-emitting operations to lower-cost jurisdictions in the midst of inconsistent carbon pricing policies.

While politically challenging to implement, carbon pricing is an increasingly popular mechanism that harnesses market forces to address climate change. As the burden of reducing emissions shifts to those that are most responsible for emitting it and the assessment of a corporation's environmental footprint moves from a measure of corporate responsibility to a mainstream measure of performance, accounting for carbon pricing risk is a must for forward-looking businesses and investors.

To learn more about ESG risks and opportunities, subscribe to our ESG InFocus newsletter