DWGOM: A Future with No Lease Sales

For decades, the Unites States Deep Water Gulf of Mexico (DWGOM) has set a standard of consistency for a wide range of oil and gas operators looking for a stable investment environment. Lease sales in the US Outer Continental Shelf (OCS) have been held annually since 1976, with at least two sales per year being held since 1979, with few exceptions. This has led to continual investment in deep water (400+ m) hydrocarbon exploration and production activities, providing a significant source of revenue to the state and federal governments. According to the Department of the Interior (DOI), federal revenues from oil and gas activity in the Gulf of Mexico (bonuses, rentals, royalties and other revenues) totaled over USD 8 billion in 2021. The governments of oil-producing coastal states also benefit under a revenue sharing scheme.

The future of lease sales in the DWGOM is uncertain. For the first time in its history, the Department of the Interior (DOI) allowed an existing Leasing Program to expire without having a new one in place, during which time no sales can be held. A 2023-2028 Proposed Program has been published by the DOI, but a possible scenario under evaluation in that Program proposes no sales over that five-year period. Here we review the development of the Program and estimate the impact future lease sales (or lack thereof) might have on production and government take.

The 2017 - 2020 Program expired on 30 June 2022, so no new sales can be held until a new Program is approved. The DOI on 1 July 2022 announced the availability of the Proposed Program for the 2023-2028 National OCS Oil and Gas Leasing Program. The 2023 - 2028 Proposed Program includes 10 potential lease sales in the Gulf of Mexico (GOM) Program Area 1, which covers the Western Planning Area, most of the Central Planning Area and a small portion of the Eastern Planning Area. This is similar to the current available leasing area in the Gulf. The proposed timeline for the sales includes one sale in each of years 2023 and 2028, and two sales in each of years 2024 - 2027. Before the Final Proposed Program is published, the DOI still has the discretion to determine that no sales at all will take place during that period.

The Notice of Availability for the Proposed Program was published in the Federal Register on 8 July 2022 and 90-day period for public comment closed on 6 October 2022. After reviewing the comments, the DOI will publish the Proposed Final Program, representing the third and last phase of the process. There follows a minimum 60-day period before the Interior Secretary can approve the Program.

Economic production from discovered projects in DWGOM begins to decline in 8-9 years, with a rapid decline commencing in 2035 (Figure 1). This production decline could begin sooner if the any unsanctioned projects never come to fruition and reach their potential. Since 2010, 4-5 new projects have begun producing each year on average. To sustain this rate of development, at least this many discoveries would be required each year, considering not every discovery gets economically developed. 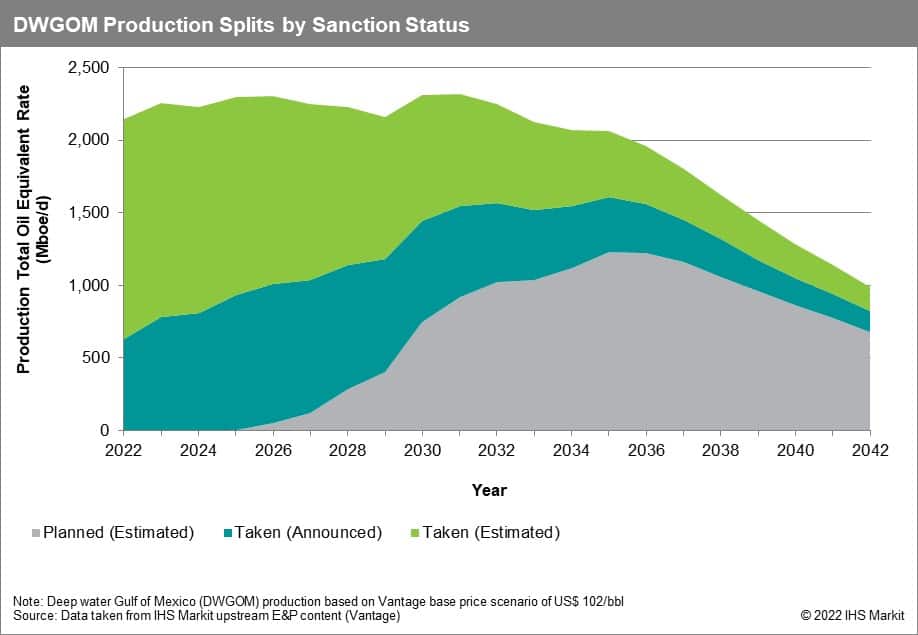 The production from already discovered assets leads to significant government revenue, in addition to sustained cashflows for operators and their partners, numerous jobs (both directly and indirectly industry-related), and economic stability for several coastal states. To put into perspective the importance of the oil and gas sector for these states, according to the Texas Oil and Gas Association, USD 15.8 billion was paid in taxes and state royalties in fiscal year 2021. These funds directly support schools, teachers, roads, infrastructure, and more. In Texas alone, 1.37 million jobs stem from the Texas oil and natural gas industry. There are numerous examples of the importance of the E&P industry for these states, so a future with less opportunity for oil and gas exploration, discovery, and production would have significant, material economic impacts (Figure 2). 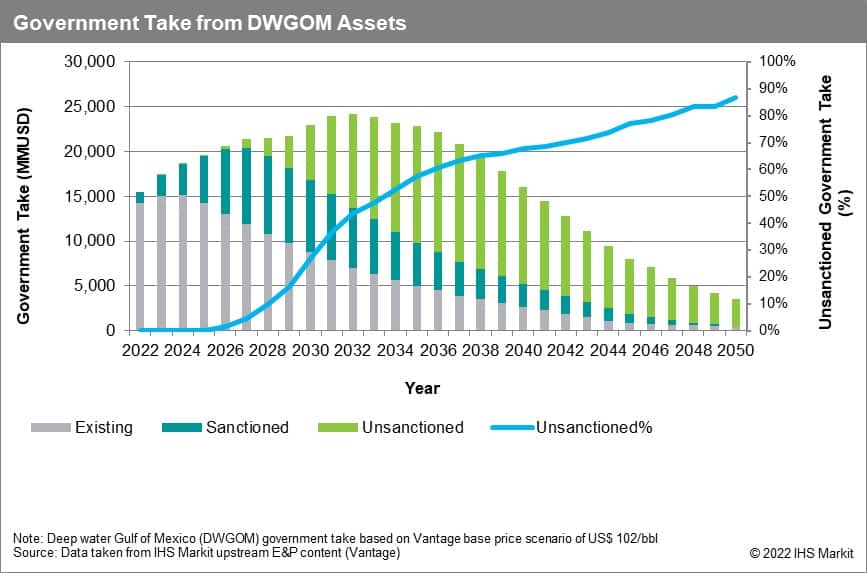 Shortly after 2030, government revenue is mainly derived from projects which have not yet been sanctioned. Until a project is sanctioned, there is always a possibility that the project never goes forward. As an example, the Wildling field was expected to be sanctioned within the next year by the previous operator, however the project has been put aside by the new owner after the previous operator was bought out. The uncertainty of unsanctioned projects highlights the importance of continued exploration and discovery of quality resources for development of economically viable deepwater fields. Government take from sanctioned and existing production begins to decline within the next decade and begins to rely on unsanctioned projects to maintain revenue streams, highlighting the importance of continuous exploration and development activity to maintain a vibrant circular economy.