Sodium carbonate, also known as disodium carbonate or soda ash, is a member of the chlor-alkali chemical family and competes with caustic soda as a source of alkali (sodium oxide) in many processes. Commercial soda ash is highly purified and is sold in various grades that differ primarily in bulk density. Sodium carbonate is produced synthetically and from natural resources (primarily trona). In 2020, synthetic methods accounted for about three-fourths of production, but production from natural resources has recently increased the fastest, led by increased capacity in Turkey.

Northeast Asia (led by mainland China), North America (led by the United States), and the Middle East (led by Turkey) are the world’s leading producing regions. Production will increase the fastest in the United States and India in 2020–25, while production in Western Europe and South America will continue to decline. 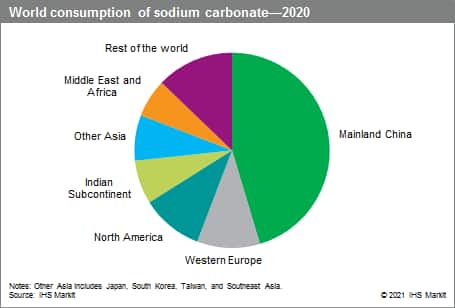 S&P Global’s Chemical Economics Handbook – CEH Sodium Carbonate (Soda Ash) is the comprehensive and trusted guide for anyone seeking information on this industry. This latest report details global and regional information, including