The coatings industry is one of the most heavily regulated industries in the world, so producers have been forced to adopt low-solvent and solventless technologies in the past 40 years, and will continue to do so. The number of coatings producers is large, but most are regional producers, with only 10 or so large multinationals; however, most of the large multinationals have expanded operations in fast-growing areas like mainland China and India. The most noteworthy trend has been consolidation, especially among the largest producers. 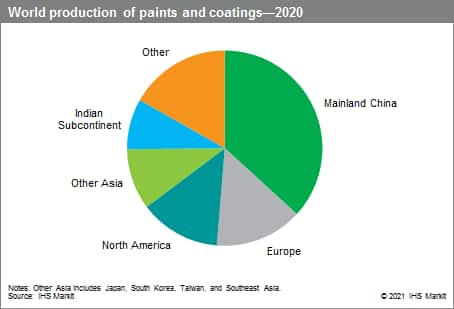 Production and consumption are nearly equal in each country, as trade is limited to relatively small quantities of high value product. Demand in Asia continues to rise faster than elsewhere in the world, and the region now accounts for 55% of global consumption on a volume basis. Generally, coatings grow in tandem with the economy, so growth will continue to focus on the developing world.

Coatings provide two primary functions that are of considerable economic importance—decoration and protection. About 55% of the coatings produced worldwide are used to decorate and protect new construction as well as to maintain existing structures, including residential homes and apartments, public buildings, and plants and factories. Another 35% of the coatings are used to decorate and/or protect industrial products. Without coatings, product lives might be shortened drastically and many products would not even be marketable. Most of the remaining coatings, called “special purpose,” are used for miscellaneous applications such as traffic paints, vehicle refinishing, high-performance coatings for industrial plants and equipment, and protection of marine structures and vessels.

In emerging markets, coatings are growing at a much faster rate. The best prospects for growth are mainland China (4% average annual growth rate during 2020–25), India (5.5%), Poland (3–4%), Turkey (2–3%), and Saudi Arabia (2–3%). Total global growth on average should be 3–4% per year. On a value basis, it is likely that growth will be even higher as a result of the increased production of relatively higher-value coatings. Most of the major multinational coatings producers have production in mainland China. The multinational producers should gain even more presence in the developing world as living standards increase and per capita consumption of coatings rises.

The major change that has taken place in the coatings industry over the last 40 years has been the adoption of new coating technologies. These new coating technologies include waterborne (thermosetting emulsion, colloidal dispersion, watersoluble) coatings, high-solids coatings, two-component systems, powder coatings, and radiation-curable coatings. Through the next five years, air pollution regulations will continue to be a driving force behind the adoption of new coating technologies; however, consumer preference is having a larger effect. For the architectural coatings market, waterbornes will likely continue to grow as consumers demand coatings that are free from odors and potentially hazardous raw materials.

In general, environmental regulations are becoming more stringent in all regions to limit emissions of volatile organic compounds (VOCs) and hazardous air pollutants (HAPs), not only in the industrialized world, but also in developing economies like mainland China. Energy conservation and rising solvent and raw material costs are also contributing factors; raw material costs account for 50–60% of the total production costs for coatings. The coatings industry is one of the larger consumers of solvents, which are mostly derived from petrochemical feedstocks and refinery operations. The coatings industry also uses a considerable quantity of nonpetrochemical feedstocks, such as pigments and additives, which are not very dependent on crude oil and gas prices. The nonpetrochemical portion of the feedstocks is approximately one-third, on a volume basis.

One new area of interest is nanotechnology, with tens of thousands of patents issued already just for the coatings industry. Very small ceramic or metallic particles can be added to paint formulations to modify specific properties (e.g., scratch, mar, wear, corrosion, and UV resistance) in highly specialized applications. The average size of nanoparticles is 10– 70 nanometers, consisting of less than 6.5 million atoms. At these sizes, the ratio of surface area to mass becomes significant, giving the particles unique properties. For example, at 2 nanometers, the conductivity of metal particles changes and at 20 nanometers, the transparency of ceramic particles changes. At 20 nanometers, particles of gold turn red and their plasticity disappears.

S&P Global’s Chemical Economics Handbook –Paint and Coatings IndustryOverview is the comprehensive and trusted guide for anyone seeking information on this industry. This latest report details global and regional information, including

S&P Global’s Chemical Economics Handbook –Paint and Coatings Industry Overview has been compiled using primary interviews with key suppliers and organizations, and leading representatives from the industry in combination with S&P Global’s unparalleled access to upstream and downstream market intelligence and expert insights into industry dynamics, trade, and economics.