The global market for all disinfectants, including chlorine-based disinfectants, is increasing as a result of growing concerns over the spread of infectious diseases. Other reasons underlying market growth are an increasing population and increasing requirements for clean water, the scarcity of freshwater in densely populated areas, mainly in Asia, which make it necessary to recycle used water to drinking water quality, and to desalinate seawater for drinking water supply. As a result, the role played by chlorinated disinfectants is related to health and social issues, and less dependent on the general economy. 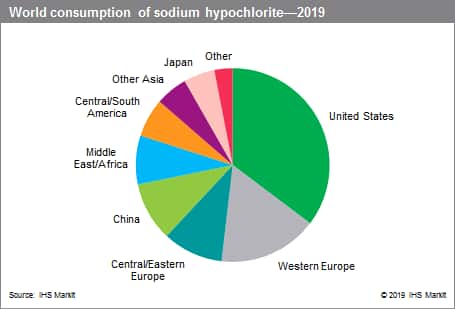 Sodium hypochlorite is commonly referred to as liquid chlorine bleach throughout the world. In the United States, it is used principally as a laundry bleach or household cleaner. Use of household bleach has increased during the past few years, with growing concerns over infectious diseases.

Global demand for sodium hypochlorite for household use is projected to grow at about 0.7% annually during 2019–24. In the food industry, sodium hypochlorite is used mainly as a disinfectant to sanitize food preparation equipment; it also finds use in fruit and vegetable processing; pork, beef, and poultry production; fish processing; and in aquaculture, where it is used for the sanitation of shrimp/fish ponds. Aquaculture production has been growing at 5–6% annually since 2000 and is forecast to continue at that pace for the next 5–10 years. All regions are seeing this growth, but Asia is the largest, accounting for nearly 90% of global production.

Globally, industrial applications for sodium hypochlorite are forecast to grow at a rate of 1.8% annually during 2019–24 but will vary by region. The leading application is municipal/industrial water treatment disinfection.

The largest world market for calcium hypochlorite is swimming pool sanitization, which accounts for about 37% of its total consumption. Use for disinfection and aquaculture applications is forecast to continue to grow rapidly, in particular in Asia.

All regions require increased levels of disinfection because of growing population demands. Global production of fish, crustaceans, and other aquaculture has grown dramatically since 1970.

Lithium hypochlorite finds use primarily as a shock treatment in pools with vinyl liners, fiberglass, painted pools, and spas.