This report covers fluorspar and its major derivative, hydrofluoric acid, as well as providing additional data on aluminum fluoride, cryolite, and fluosilicic acid.

Fluorspar is a mineral from which more than 95% of all fluorine+based compounds are derived. Production of hydrofluoric acid accounted for an estimated 53% of the world production of fluorspar in 2019, followed by use for aluminum smelting, with 22%, and steel manufacturing, with 58%. Hydrofluoric acid is the most important chemical derived from fluorspar and accounted for about 54% of global fluorspar consumption in 2019.

Although 20 countries have the ability to produce significant quantities of fluorspar, the majority of the world’s fluorspar production has become concentrated in China, which accounted for 55% of world production in 2019. The next-largest producers are North America, Mongolia, and Africa. Historically, the majority of China’s fluorspar production was exported, but China has spent the last decade building and growing its fluorine-based chemical industry. Now, China adds value to its domestic acid-spar supply through the production of downstream products such as hydrofluoric acid, fluorocarbons, and fluoropolymers rather than exporting the mineral.

World demand for fluorspar will grow at an average annual rate of about 2% during 2019-24. 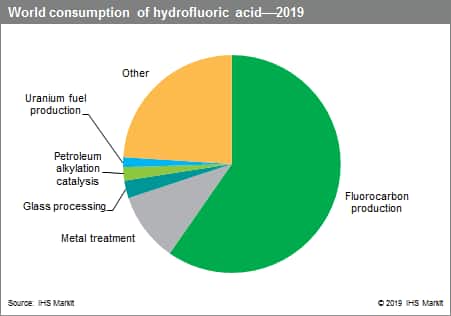 Hydrofluoric acid is the raw material for the production of fluorocarbons, which are used in refrigeration and air conditioning, and as a precursor to fluoropolymers and elastomers. In addition, hydrofluoric acid serves as a catalyst in petroleum alkylation, a process used for gasoline manufacture. It is also used in metal treatment, uranium fuel production, and as a raw material in the manufacture of inorganic fluorine compounds, including most inorganic fluorides as well as elemental fluorine.

Fluorocarbon production accounted for 60% of hydrofluoric acid consumption in 2019. This market is driven by the end+ use markets of refrigerant and air conditioning gases, which account for almost half of total fluorocarbon consumption globally. Moderate growth of about 2-3% is expected over the next few years. Many changes are looming in this industry over the next 15 years, as hydrochlorofluorocarbons (HCFCs). are being restricted and gradually substituted by gases with a lower global warming potential.

S&P Global’s Chemical Economics Handbook - Fluorspar and Inorganic Fluorine Compounds is the comprehensive and trusted guide for anyone seeking information on this industry. This latest report details global and regional information, including

S&P Global’s Chemical Economics Handbook - Fluorspar and Inorganic Fluorine Compounds has been compiled using primary interviews with key suppliers and organizations, and leading representatives from the industry in combination with S&P Global’s unparalleled access to upstream and downstream market intelligence and expert insights into industry dynamics, trade, and economics.