Epoxy resins are thermosetting resins, meaning that they do not develop useful properties until they are reacted with suitable cross-linking agents. There is a limited amount of high-molecular-weight epoxy resin that forms useful properties as a thermoplastic coating. Epoxy resins can be used in various forms, including as liquids (liquid epoxy resins [LERs]) and solids, as well as dissolved in solvents, such as water and organic solvents. Production and consumption data are usually expressed as a combination of all resin forms from basic producers like Olin, Hexion, and Huntsman.

Producers of epoxies also sell basic forms of resin (mainly LER) to customers such as coatings producers that modify them to achieve certain properties. The leading market for epoxies is coatings, which account for 45–50% of consumption. Other large markets are electrical/electronics, adhesives, construction, and composites. About 80% of epoxies are considered commodities; the other 20% are specialties (e.g., industrial adhesives for automotive and composites for aerospace and wind turbine blades). 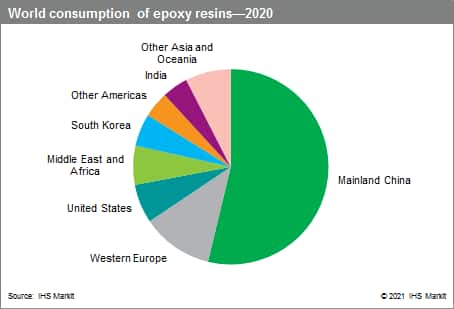 Growth markets for epoxies include

The three leading Western producers of epoxy resins are Olin, Hexion, and Huntsman, which have dominant positions in North America and Western Europe, but much less interest in Asia. Starting in 2010, there was considerable expansion of capacity in mainland China and South Korea, which led to falling prices and poor profitability, especially in the commodity-based resins business. As a result, Dow Chemical divested its base epoxy interests in mid-2015. In addition, Huntsman and Hexion recently closed some of their plants in Europe and North America.

The specialty epoxies business is currently the more attractive portion of the industry since there are higher barriers to entry and requirements, like formulating skills and technical support, are highly valued.

Global epoxy resin demand is forecast to grow at an average annual rate of 3.4% during 2021–26. The fastest growing markets will continue to be in Asia.

S&P Global’s Chemical Economics Handbook – Epoxy Resins is the comprehensive and trusted guide for anyone seeking information on this industry. This latest report details global and regional information, including

S&P Global’s Chemical Economics Handbook – Epoxy Resins has been compiled using primary interviews with key suppliers and organizations, and leading representatives from the industry in combination with S&P Global’s unparalleled access to upstream and downstream market intelligence and expert insights into industry dynamics, trade, and economics.