This chlor-alkali report presents world capacity, production, and consumption of chlorine and caustic soda (sodium hydroxide, NaOH) by region and application for 2011–20, with a forecast to 2025. It does not cover the production of potassium hydroxide (KOH), but includes the chlorine coproduced with KOH. Global chlor-alkali consumption is a function of global economic growth or decline. Chlorine demand is driven primarily by the construction sector, while caustic soda demand is driven primarily by the manufacturing sector. Chlorine consumption is largely dependent on the vinyl chain, which includes the production of EDC, VCM, and PVC. Demand for chlor-alkali roughly follows worldwide GDP; however, aggregate global growth or decline does not account for the differences in regions, masking the stronger growth in developing countries versus mature (developed) economies.

Several trends have affected the chlor-alkali market. The first is the pace at which mainland China has reached a position of self-sufficiency in chlor-alkali and polyvinyl chloride (PVC) capacity. Mainland Chinese coal has provided a low-cost method to produce acetylene and chlorine. Much of mainland China’s recently added PVC capacity is produced from VCM via acetylene (instead of from EDC), owing to the low availability of ethylene in the country. However, future VCM production will be affected by the Minamata Convention on Mercury calling for catalyst replacement (a mercury-based catalyst is used for converting acetylene to VCM). The treaty contains a specific clause relating to VCM, which states that after its effective date (16 August 2017), new VCM plants will not be allowed to use a mercury catalyst and all VCM plants have to switch to a mercury-free catalyst within five years after a technically and economically viable alternative becomes available. Mainland China is pursuing the deployment of a catalyst containing about half as much mercury as the traditional catalyst as a way of meeting the 50% use reduction mandate. As a result, there are not likely to be future expansions of acetylene-based VCM/PVC. 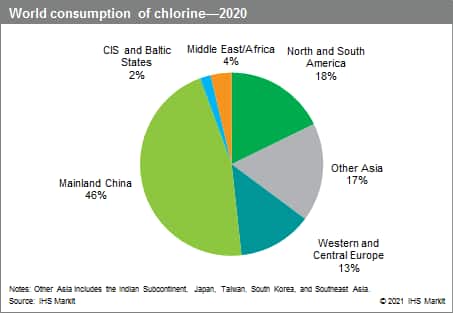 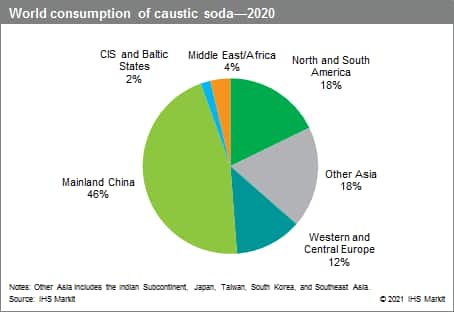 Other organic chemical markets (propylene oxide, epichlorohydrin, TDI, MDI, polycarbonate, and chlorinated intermediates) accounted for more than one-fourth of chlorine consumption in 2020, while use for inorganic chemicals, pulp and paper, and water treatment together accounted for about 10% of the total.

S&P Global’s Chemical Economics Handbook – Chlorine-Sodium Hydroxide (Chlor-Alkali) is the comprehensive and trusted guide for anyone seeking information on this industry. This latest report details global and regional information, including

This report can help you: