Because of its unique properties, carbon dioxide is a versatile compound with many different applications in gaseous, liquid, and solid states. It is used as a chemical building block (mainly for urea synthesis from ammonia), as an acidifier in beverage and water treatment applications, as a supercritical solvent (e.g., in enhanced oil recovery and caffeine extraction from coffee), as a shielding and inerting gas (e.g., in metalworking or food preservation), and as a chilling and cleaning agent while in a solid state (it sublimates from solid directly to gaseous state).

However, carbon dioxide is regarded as the leading climate issue for its role in accelerating global warming. CO2 is produced by the burning of fossil fuels (coal, natural gas, crude, or refined oils) to generate electricity and heat, or for transportation purposes; via the production of cement (the transformation from limestone or calcium carbonate to lime or calcium oxide releases CO2); and by various other industries. In 2020, mainland China was estimated to be the largest CO2-producing nation (28% of global CO2 emissions), followed by the United States and India with 16% and 6%, respectively.

Attempts are ongoing to limit and reduce CO2 emissions while collecting and sequestering carbon dioxide from the atmosphere. The chemical conversion and fixation of carbon dioxide, however, has limited applications for bulk use. Therefore, long-term geological storage including usage for enhanced oil recovery is probably the only practical way to reduce global carbon dioxide levels in the Earth’s atmosphere. As current carbon capture and storage technologies for enhanced oil recovery are not cost-competitive with low oil prices, more than two-thirds of planned carbon capture, utilization, and storage projects have been cancelled over the past five years. 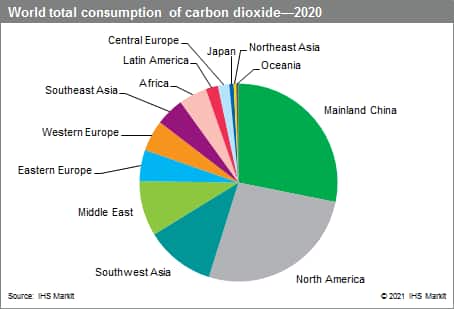 The major issue in the carbon dioxide market is balancing regional supply and demand. Carbon dioxide sources may or may not exist where demand is greatest. In addition, chemical manufacturing operations that produce a gaseous carbon dioxide by-product run according to demand for the primary product, as opposed to demand for the by-product carbon dioxide. For example, ammonia plants typically operate at full capacity in the fall and winter seasons in preparation for spring fertilizer requirements. Carbon dioxide demand, in contrast, tends to be highest during the warm summer months when ammonia plants may be closed for turnaround, so, supplies are not often balanced with demand.

In the past few years, there have been growing concerns about greenhouse gases (and the effect of corn-based ethanol production) and profitability that have somewhat dampened interest in corn-based ethanol. However, federal mandates for ethanol blending in gasoline in the United States will continue to support corn-based ethanol production. In the future, the primary sources of carbon dioxide are expected to be ethanol fermentation plants, as ammonia plants are being shut down as a result of less-expensive offshore production or lower-cost import replacements.

S&P Global’s Chemical Economics Handbook – Carbon Dioxide is the comprehensive and trusted guide for anyone seeking information on this industry. This latest report details global and regional information, including

S&P Global’s Chemical Economics Handbook – Carbon Dioxide has been compiled using primary interviews with key suppliers and organizations, and leading representatives from the industry in combination with S&P Global’s unparalleled access to upstream and downstream market intelligence and expert insights into industry dynamics, trade, and economics.

How is carbon dioxide produced?

For merchant use, carbon dioxide is usually recovered as a gaseous by-product of industrial operations and liquefied for sale as a merchant product because liquid carbon dioxide can be transported more economically than gaseous

What are the sources of carbon dioxide?

Large amounts of carbon dioxide can be recovered from naturally occurring underground sources. In the chemical industry, most by-product carbon dioxide is recovered at facilities that produce hydrogen by the steam reforming of natural gas feedstock.

Is carbon dioxide classified based on purity?

How is carbon dioxide transported?

What are the major uses of carbon dioxide?

Because of its unique properties, carbon dioxide is a versatile compound with many different applications in gaseous, liquid, and solid states. It is used as a chemical building block (mainly for urea synthesis), as an acidifier in beverage and water treatment applications, as a supercritical solvent (e.g., in enhanced oil recovery and caffeine extraction from coffee), as a shielding and inerting gas (e.g., in metalworking or food preservation), and as a chilling and cleaning agent while in a solid state (it sublimates from solid directly to gaseous state).

What effect has COVID had on the carbon dioxide market?

Though the overall carbon dioxide market has been affected by the COVID-19 pandemic, it has played a crucial role in the steps taken to tackle the disease. Dry Ice has enabled the major vaccines to be stored and transported for dissemination and has elevated its status from traditional uses to a vitally important component.

Who are the major players in the market?

Can carbon dioxide cause global warming?