Bromine is used in numerous inorganic and organic compounds. Since it is an element, it cannot be substituted by other materials without the properties of the compound being changed, often significantly. However, some bromine compounds, especially organic compounds, are susceptible to substitution by products with completely different chemistries. Important attributes for its use in inorganic compounds include its oxidation potential and its relatively high molecular weight (compared with chlorine).

In 2021, four bromine producers (Albemarle, Chemtura [now owned by LANXESS], Jordan Bromine, and ICL) accounted for more than 85% of the total global production capacity. Producers in mainland China, India, and the CIS countries are much smaller. Major producers are highly integrated, producing a wide variety of brominated end-use chemicals and intermediates, primarily from bromine or from hydrobromic acid produced as a by-product of bromination. 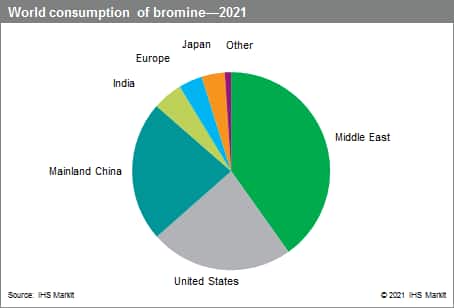 The largest application for bromine-based compounds is in the production of brominated flame retardants (BFRs), accounting for 50% (100% bromine content) of total global consumption in 2021. Because the market is global, legislation in one region of the world has an impact on the type and use of flame retardants in another. Much of the environmental and toxicological concerns over the use of BFRs have been initiated in Europe. Hexabromocyclododecane (HBCD) is no longer allowed for use as a flame retardant in certain regions—Japan (2014), the European Union (2015), and Canada (year-end 2016). It is being replaced mainly by brominated polymeric flame retardants.

Clear brine fluids (CBFs) constitute the second-largest end-use market, accounting for 15% (100% bromine content) of 2021 global consumption of bromine-based compounds, most of which is used in North America. CBFs are used for the production of crude oil in deep, high-pressure wells where conventional drilling muds can plug the formations; there is also increased use for the development of nonconventional sources such as deepwater wells and oil sands. The Gulf of Mexico is one of the leading consuming regions.

Water treatment accounted for 8% (on a 100% bromine content basis) of the global consumption of brominebased compounds in 2021. The majority is consumed in mainland China and the United States, with a smaller amount consumed in Western Europe. Products used in this segment are brominated hydantoins and sodium/ammonium bromides. Consumption is broken down nearly equally between hydantoins and bromides.

Consumption of hydrogen bromide (HBr) used as a catalyst in the production of purified terephthalic acid (TPA) accounts for nearly 12% (100% bromine content) of the 2021 global consumption of bromine-based compounds. TPA is used in polyethylene terephthalate (PET) production; PET is ultimately used in packaging and fibers.

Overall, demand for elemental bromine is forecast to grow at 2–3% annually during 2021–26. The relatively high growth rate is driven by the recovery of the industry from the decline during the COVID-19 pandemic, as well as the expectation of higher oil prices.

S&P Global’s Chemical Economics Handbook –Bromine is the comprehensive and trusted guide for anyone seeking information on this industry. This latest report details global and regional information, including

S&P Global’s Chemical Economics Handbook –Bromine has been compiled using primary interviews with key suppliers and organizations, and leading representatives from the industry in combination with S&P Global’s unparalleled access to upstream and downstream market intelligence and expert insights into industry dynamics, trade, and economics.