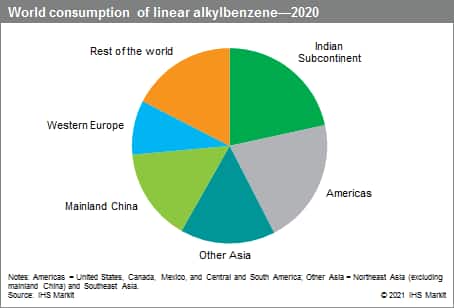 Over the forecast period, consumption of linear alkylbenzene is expected to increase at an average annual rate of almost 3%, albeit with significant regional differences. Growth will be driven by healthy demand in Africa, mainland China, India, Indonesia, the Middle East, and South Korea. These markets consumed nearly 60% of total world LAB demand in 2020. Since about 2015, consumption of LAB in India has exceeded LAB consumption in mainland China. India still uses a lot of powder detergents, whereas liquid detergents are growing in mainland China. If crude oil prices (and consequently prices for LAB’s raw materials n-paraffins and benzene) increase significantly during 2020–25, consumption could grow at a slightly lower rate. Additionally, if there is a big switch to competing oleochemical-based surfactants (particularly in the developing regions and primarily as a result of possible lower fatty alcohol prices in the future compared with LAB), this will also negatively affect LAB consumption, as countries like mainland China will switch detergent formulations. Given the global pandemic, however, higher demand for cleaning products will likely stick around, especially with consumer’s heighted cleaning standards in a postpandemic world, benefitting the market for LAB.

In mature markets, like North America, Western Europe, and Japan, consumption will be decreasing, flat, or modestly increasing at best. This is a result of efforts of the detergent manufacturers to introduce new products that contain less surfactant per washload. In recent years, liquid laundry detergents (including unit dose packs, especially in the United States) have become more popular with consumers, and therefore, consumption of powder laundry detergent (traditionally containing significant amounts of LAS) has been decreasing. More recently, after a surge in laundry (washload basis and some stockpiling) in 2020 brought about by the COVID-19 pandemic, the North American laundry market is expected to decrease and then stabilize (washload basis) over the 2020–25 period. However, total demand is expected to remain above prepandemic levels.

Regions with still-developing markets that have significantly lower consumption of detergents per capita (although this is changing), like Asia, Central and South America, the Middle East, and Africa, are expected to register an increase in demand between 2% and 4% annually

Worldwide production and consumption of BAB has steadily decreased over the years. Increased availability of LAB, its competitive pricing, and the concerns associated with the low biodegradability of BAS have led to the steady decline of BAB demand. This trend is expected to continue over the forecast period, and both production and consumption of this product will decline, although at a slower rate.

S&P Global’s Chemical Economics Handbook – Alkylbenzenes, Linear and Branched is the comprehensive and trusted guide for anyone seeking information on this industry. This latest report details global and regional information, including

S&P Global’s Chemical Economics Handbook – Alkylbenzenes, Linear and Branched has been compiled using primary interviews with key suppliers and organizations, and leading representatives from the industry in combination with S&P Global’s unparalleled access to upstream and downstream market intelligence and expert insights into industry dynamics, trade, and economics.