How has the war in Ukraine, China’s 'zero-COVID' strategy impacted sulphuric acid, copper?

Steep rises in battery raw materials prices since the start of 2021 are causing speculation over either demand destruction or delays, and have led to the belief that automotive companies could shift preferences for their electric vehicles.

The lowest-cost pack has always been lithium-iron-phosphate, or LFP. Tesla has been using LFP for its China-made entry-level models since 2021. Other carmakers such as Volkswagen and Rivian also announced they will use LFP in its cheapest models.

Nickel-cobalt-manganese, or NCM, batteries are also an option. They require a similar amount of lithium to LFP, but it includes cobalt, which is expensive and its production process is controversial.

Cobalt metal price is up 70% on year. Nickel has seen recent turbulence subsequent to a short squeeze on the LME. The three-month nickel price is trading at an intra-day range of $27,920-$28,580/mt on May 10.

Meanwhile, lithium prices have surged over 700% since the start of 2021, which has led to a big jump in battery pack prices.

According to S&P Global Market Intelligence, Chinese battery metal costs in March were up 580.7% on year for LFP batteries on a dollar per kilogram basis, rising to nearly $36/kwh. NCM batteries were up 152.6% on over the same period to $73-78/kwh in February.

"The way lithium has been priced up over the past 12 months, it is a smaller discount than you would expect [against NCM] and once you throw in performance factors it is a more difficult decision that it would have been. You might want to give away some performance for cost, but it isn't much cheaper these days," one cobalt hydroxide seller said.

"There were concerns, indeed, because the cost of LFP was rising too much for the segment that it targets, which is low-cost batteries," concurred a lithium producer source.

"There are no clear alternatives to nickel-intensive batteries (those containing 8 parts nickel or more) in the short- to medium-term. A return to lower-nickel NMC batteries reintroduces concerns about cobalt usage, while LFP batteries cannot yet fully match the range performance and also have relatively unfavorable low-temperature characteristics compared with nickel-intensive batteries," Alice Yu, senior analyst, S&P Global Market Intelligence.

While the preferred chemistry in China is the LFP battery, it is commonly assumed that NCM will play a larger part in the EU markets – where consumers prefer cars that take them across the country or cross-continent in the fewest charges.

"When looking at designing battery plants, we look at flexibility. Right now there is price parity between LFP and NCM. If LFP becomes a lot cheaper again we can maybe prioritize production, but right now we should produce NCM because it's a premium product," an automotive OEM said.

A second automotive OEM echoed that comment, "LFP batteries will be there for entry level vehicles, but not adopted for premium cars".

Lithium supply remains a big concern for the EV market and something that could stop any company easily switching over to the LFP.

Research from S&P Global Commodity Insights shows that if all lithium mines in the pipeline come online in the proposed timeframe, with the right specifications of battery grade material, there will still be a 220,000 mt shortfall by 2030, assuming demand reaches 2 million mt at the end of the decade. 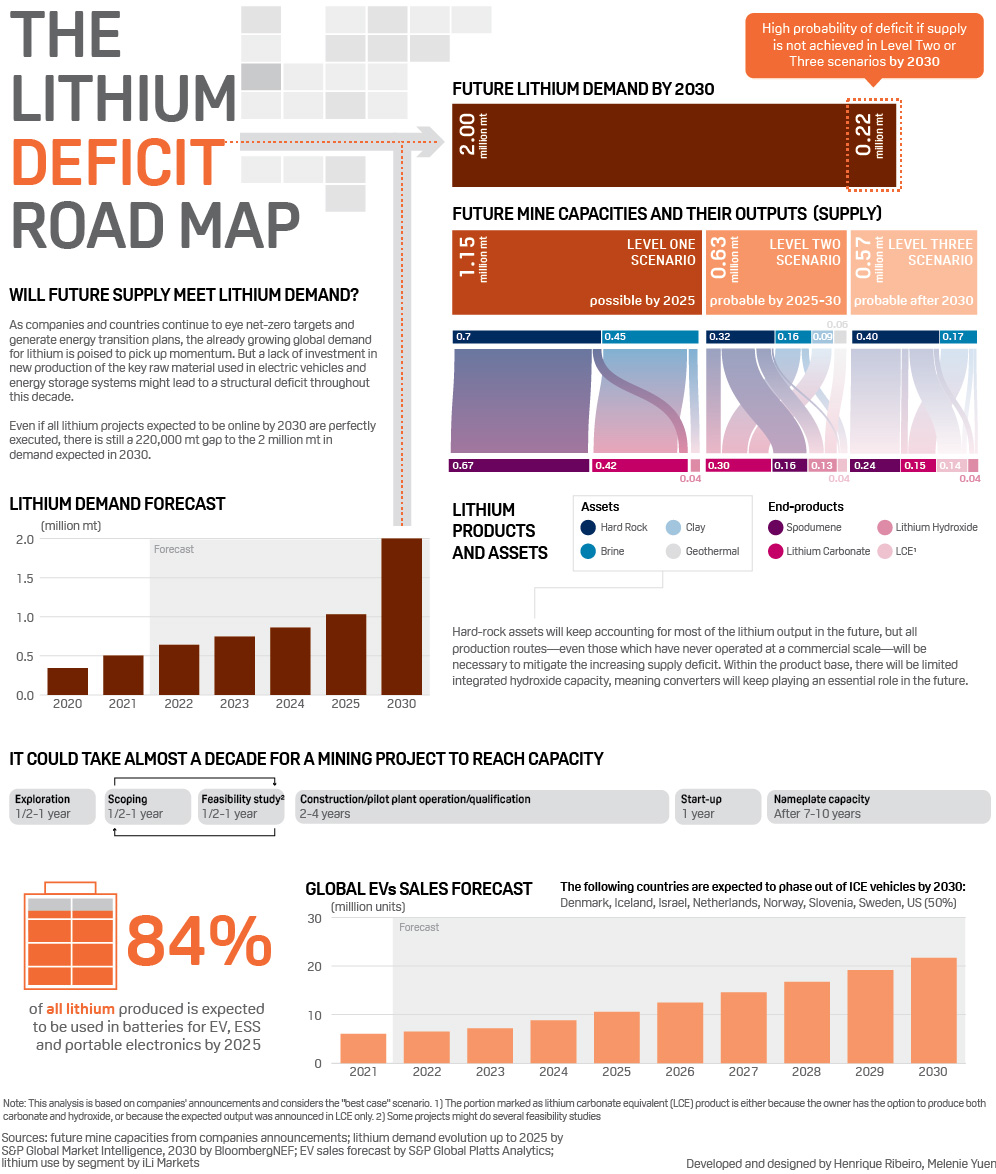 "There are several [spot] requests, but we don't have any material available at the moment," said the lithium producer source. "We only have volumes available when a customer has some problem, or cancels a shipment for some reason, otherwise it's all booked," he added.

The surging concerns about lithium, and other battery metals, becoming the limiting factor to drive EV adoption has led automakers to increasingly get involved in the upstream side of the industry.

General Motors will invest in the development of Controlled Thermal Resources' Hell's Kitchen lithium project in California. Stellantis, Volkswagen and Renault partnered with Vulcan Resources to secure material from the Zero Carbon project in Germany.

Given the expected supply deficits of lithium, cobalt and nickel, the battery industry has been exploring alternatives. Sodium-ion batteries are considered as one of the most promising options.

Sodium-ion will typically employ carbon in the anode and materials from a category known as Prussian Blue in the cathode. There are "a series of metals that can be used on Prussian Blue, and it will vary depending on the company," according to Venkat Srinivasan, director of US-based Argonne Collaborative Center for Energy Storage Science (ACCESS).

The largest advantage for sodium-ion is its lower production cost, sources said. Due to the abundance of sodium on earth, these battery packs could cost almost 3%-50% less than lithium-ion batteries. The energy density is comparable to LFP.

But before sodium-ion can reach significant commercial scale, some concerns need to be addressed.

There are still some improvements to be achieved on the electrolyte and the anode sides.

Comparing to an LFP-based battery, sodium-ion is stronger on discharging, but weaker on charging.

The main limiting factor is that this is still some time frame from being available at a commercial level.

Similarly, billions of dollars of investments have been made in the lithium-ion supply chain based on lithium- and nickel-rich chemistries.

"We would certainly look at sodium-ion but we need to first focus on the technologies that are already out there and bringing the plant online," one battery manufacturer said.