Get in touch with our Chemical experts today!

Understand and get insights on the impact of Winter Storm Uri

Get-up-to-date with our World Analysis Reports

What are the effects of Winter Storm Uri on the Chemical Industry?

The Winter Storm Uri brought brought freezing temperatures and snow to the US Gulf Coast and left millions without power as the storm led to catastrophic failures of the power grid and water supply in the southern United States, especially Texas on Feb 15.

Many refineries and petrochemical plants along the Gulf Coast were shut down or operated at reduced capacity. Most of the distribution network was also affected, including waterborne export terminals, rail, and pipeline infrastructure. The power supply was hit particularly hard and industrial curtailments were instituted to minimize the residential impacted.

In addition, 40% of Texas natural gas and upwards of 15% crude oil production were impacted. Refineries and petrochemical plants across most of Texas and Louisiana were damaged by Uri, unlike the damage caused by hurricanes in the past, which was relatively geographically based. Units were switched off quickly in some cases, which could have resulted in more damage.

Utility supply, including natural gas, power, nitrogen and other industrial gases, has been extremely limited. However, those issues have been addressed and the industry can move into the next phase of the restart process. We expect the complete return to pre-storm rates to take some time.

As winter storm Uri hit the Texas-Louisiana area in February, several sites shut down or ran at reduced rates in the chemical industry. The freezing temperatures effected power and water supply across Texas, setting back recovery efforts. Temperatures in Texas rose over the weekend, and utilities have been restored to a large extent. Facilities are being evaluated, and restarts has begun.

Winter Storm Uri has impacted nearly 78 percent of US ethylene supply, according to S&P Global's power database. In comparison to the east of Lake Charles, Louisiana, which did well, the effect on supply in Texas is more widespread. With the weather returning to normal for this time of year, the focus has shifted to reopening sites and complexes with electricity, water, and other utilities restored.

Due to the effect of the winter storm, nearly every propylene production unit in Texas and some in Louisiana (the Lake Charles area) was shut down. It represents 60-65 percent of propylene capacity in the United States. The US propylene market was extremely tight ahead of the storm, with record-low inventory and record-high prompt month spot propylene prices of 98 cents per pound (cpp).

We believe a market correction will occur in April/May, but how fast prices will fall remains to be seen.

The Texas butadiene industry was nearly completely.  Many of the ethylene crackers rely on for feedstock are still in the very early stages of restart, so it will be some time before the production units that are down are able to restart.

It was cited that Nitrogen supply has been a concern as most polyolefin producers source nitrogen from third parties. It appears several refineries and many chemical plants experienced hard shutdowns as some control systems were challenged to meet the abrupt losses of power or critical auxiliary systems.

For polymers,  significant impacts is expected on supply availability and pricing. Force majeure and/or sales allocation events that have been announced thus far include CPChem, Formosa, Ineos, LyondellBasell, and ExxonMobil for Polyethylene production and LyondellBasell, Braskem, ExxonMobil, Total, Ineos, Flint Hills Resources and Formosa for Polypropylene.

Chlor Alkali and Vinyls All chlor-alkali and vinyls production facilities in Texas were shut down due to the winter freeze and state-wide power interruption during the week of February 15. Many Louisiana facilities were shut down or reduced operating rates. Approximately 45% of US PVC capacity, approximately 55% of US chlorine capacity.

Several chlor-alkali consumers’ plants are also still out of service or operating at reduced rates. On February 22, some of the chlor-alkali plants that shut down initiated restarts.Chlor-vinyls logistics were also impacted by the winter storm and power loss.

S&P Global estimates that 83.5% of US PVC capacity was impacted in some way, ranging from complete closure to reduced rates. On 15 February, OxyVinyls declared force majeure on all grades of PVC; both Gulf Coast assets were reported down at the height of the freeze.

Furthermore, Benzene, Toluene, and Xylenes Most of the US capacity for BTX was either shutdown or operating at reduced rates due to winter storm  Uri as well.

The storm impacted 80 to 90% of the US capacity. The capacity that was either shut down or reduced rates was 74% for benzene, 76% for toluene, and 83% for mixed xylenes. That impact on reduced production was more severe for these products than for the derivatives.

In 2020, the US Gulf Coast paraxylene ran at under 70% of capacity and could increase rates to help catch up in April/May. However, octane values should be increasing for the summer at that point. Consumers are drawing down inventories in the meantime and looking to import more paraxylene for coverage. At that point, however, octane prices should be rising for the summer. In the meantime, consumers are depleting their inventories and looking to import more paraxylene for coverage, despite the fact that usual February temperatures have returned, with highs in the mid-70s.

The ethylene oxide and ethylene glycols sector were heavily impacted by Uri, with several production units forced to shut down or reduce production rates. S&P Global understands that there have been unplanned shutdowns and force majeures declared at several plants such as Eastman at Longview, TX, Equistar at Pasadena, TX, Formosa at Point Comfort, TX, Indorama Ventures at Port Neches and Clear Lake (both in TX), Lotte Chemical at Lake Charles, LA and ME Global at Freeport, TX. Other units around the Gulf Coast area are  impacted directly by site-wide issues that have reduced ethylene supply or indirectly through reduced feedstocks or logistic constraints on rail or road based movements in and out of site.

The styrene market was in the middle of a planned turnarounds and, there was only one styrene unit, AmSty, running well during the storm. 79 percent of US capacity was either down or running at minimum rates. Westlake was forced to reduce rates due to a boiler issue and Cosmar had one SM line running slowly on EB inventory. After the storm, the facilities in Louisiana along with Westlake began the process of restarting.

Flint Hills, CITGO, INEOS Phenol and Shell Chemical all shut down cumene operations during the storm. Phenol production has also been heavily impacted by the storm, with 42% of capacity lost in February. Overall in the United States, phenol capacity is not so heavily concentrated in the US Gulf Coast so has fared slightly better. Nevertheless, with SABIC and Advansix relying on cumene supplied from the US Gulf Coast, operations across the country have been impacted.

Winter storm Uri s crippled the State’s utility infrastructures and  other facilities including refining and petrochemicals. All four cyclohexane plants  had to shutdown. All the derivatives also shutdown and some declared fore majeures on their products. The derivative unit in Mexico was also impacted as their supply of natural gas from the northern neighbor was cut short. As of now, there are not any indications that any of the cyclohexane units have restarted and it may take several weeks to get back to normal operations again. A consumer that announced a force majeure earlier is
ready to restart.

With all US MDI production centered in the US Gulf Coast, all producers have been affected.Dow stopped propylene oxide operations at both its Freeport, TX site and at Plaquemine, LA in the wake of the storm. Indorama took its PO/TBA line down along with its other operations in Port Neches, TX, while LyondellBasell also halted production in Pasadena, TX and on its other POSM line in Channelview, TX which was not on a turnaround.

Winter Storm Uri forced the shutdown of all methanol production in the state of Texas, while production within the state of Louisiana is believed to have been reduced amid curtailment of natural gas supply and other utilities. The methanol capacity reported to be currently offline represents around 90% of North American capacity or around 38% of total Americas capacity. 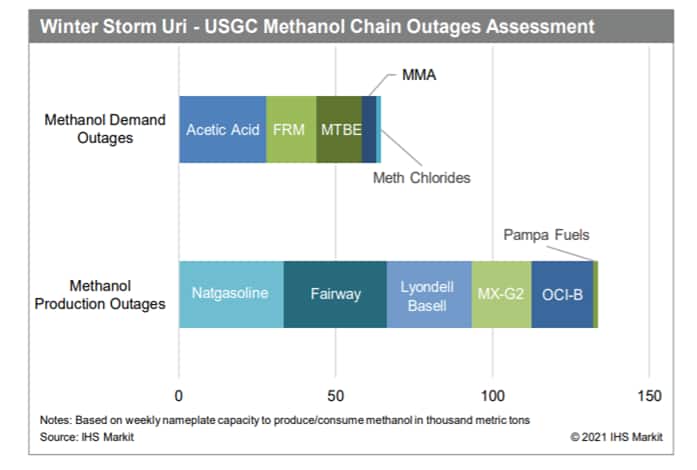 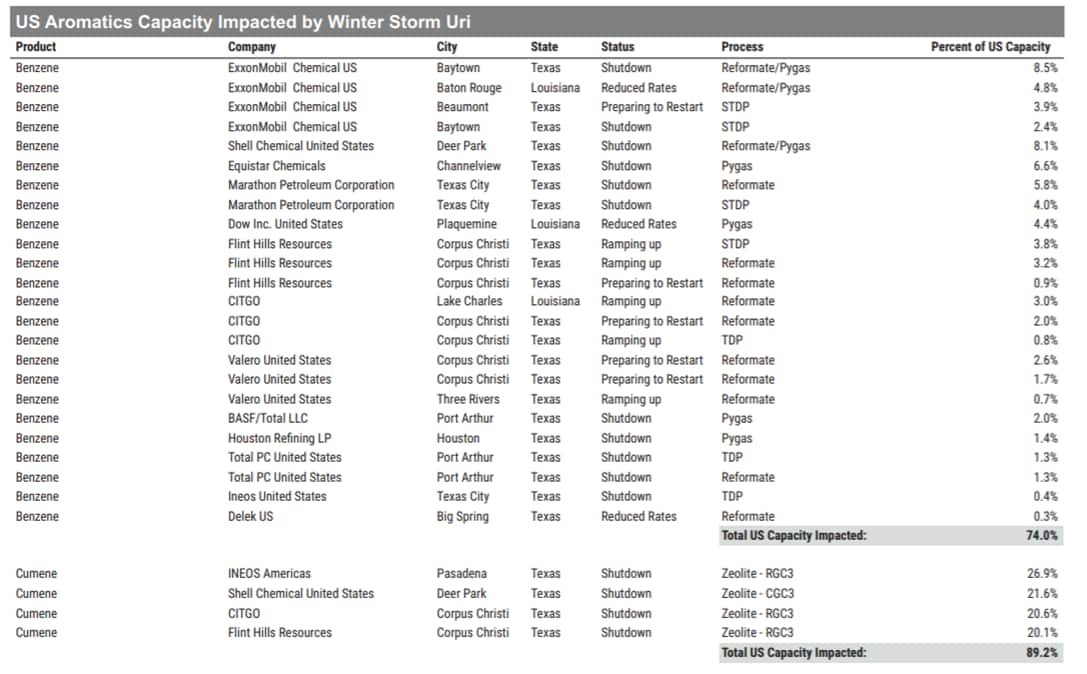 Chemical Markets: From the Pandemic to Energy Transition