Over the past decade, Norway has remained an attractive destination for E&P investment, despite maintaining a relatively high government take of oil and gas revenue during the oil market downturns in 2014-16 and 2020.

Now, the minority coalition government of the Labor and Center Parties is developing a legislative proposal to amend upstream taxation, which would represent the first major overhaul of fiscal terms for the country's oil and gas industry in over two decades. However, the changes are not expected to affect the overall state's share of hydrocarbon revenue, and the stable fiscal and regulatory regime coupled with a favorable political environment are likely to continue to bolster the upstream investment climate in Norway.

Political consensus underpins oil and gas policy continuity
Consensus among Norway's mainstream political parties regarding the critical role of the hydrocarbon industry in the national economy reduces the risk of significant oil policy shifts. In September 2021, the main opposition Labor Party won the plurality of votes in the general elections and formed a minority coalition with the Center Party. However, the center-left endorsed most of the long-term energy priorities of the previous Conservative-led government, including the continued development of hydrocarbon resources and uninterrupted access to prospective acreage via regular licensing rounds. While smaller left-leaning parties that are generally opposed to upstream expansion have gained some influence in recent years, they still lack sufficient parliamentary support to advance disruptive policies, such as E&P restrictions or a production phaseout.

A high but stable regulatory and fiscal burden
When assessing the various components of its fiscal regime over time, the key feature of Norway's approach has been its stability and predictability. This belies the lack of legal entrenchment and stability clauses - indeed, petroleum taxation rates must be renewed each year. When there are changes, these tend to conform with a very deliberate approach that has evolved from a set of 'ten commandments' (national oil policy principles adopted in 1971) that have arguably stood the test of time. 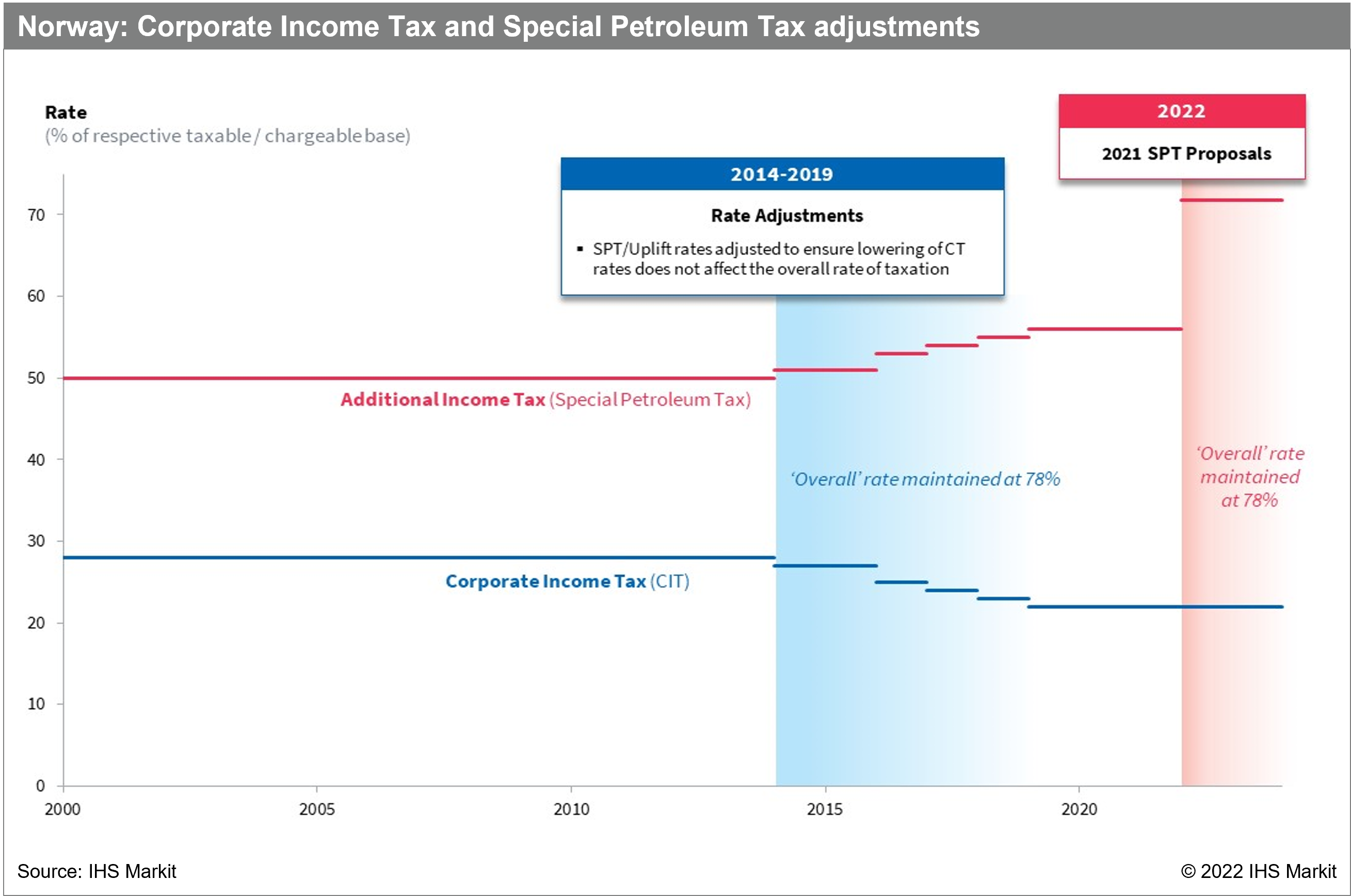 Another example of the significant but stable regulatory burden is the strict environmental standards that have seen an industry with well-established, more environmentally friendly practices in place, such as carbon taxation and zero-flaring policies (which at face value would not seem that investor-friendly), whilst neighboring regimes catch up with their own implementation and adoption.

The 2021-22 fiscal proposals are currently subject to consultation, due to be completed in May 2022. It is expected that, once passed, the changes would take immediate effect (and possibly be applied retrospectively to the start of the year). Whilst the main features of the September 2021 proposals remain, further amendments were made in April 2022. The main elements include: immediate deductions against SPT in the year of investment, deduction of CT, abolition of uplift, and the repeal of refunding the tax value of exploration losses (for CT, and notwithstanding the immediate pay-out of the SPT value of losses). It is understood that transitional measures, which also account for the temporary pandemic incentives, will apply through 1 January 2024.

Supportive policies facilitate the energy transition in the offshore industry
At the same time, the Norwegian government has played a benign role in advancing the country's climate goals in the oil and gas sector through its collaboration with E&P companies and the provision of state financial support to facilitate the development of low-carbon projects. Over the past three years, the government invested 2.3 billion Norwegian kroner (around US$251 million) in the Hywind Tampen floating offshore wind farm intended to electrify upstream platforms, and 10.4 billion Norwegian kroner in the Northern Lights offshore CO2 storage facility. These budget grants are critical to driving decarbonization developments, and broad political support for low-carbon developments is likely to ensure continued state financial participation over the longer-term.

Although the government is seeking to reach a 50% reduction in emissions on the Norwegian Continental Shelf (NCS) by 2030 and net-zero emissions by 2050, the targets are not binding, and the state does not intervene into the E&P industry's decarbonization strategies. Under Norway's long-term energy policy priorities, the government will encourage platform electrification through offshore wind deployment, contribute to the development of hydrogen value chain, including the potential establishment of a state-owned enterprise, and continue to offer new acreage for CO2 storage. This collaborative approach to low-carbon projects coupled with the commitment to maintaining offshore hydrocarbon production are likely to bolster Norway's above-ground attractiveness relative to its international competitors over the longer term.

Want to learn more about our coverage of legal, fiscal, regulatory, and other above-ground issues? Try free access to the Upstream Oil & Gas Hub to explore selected energy research, analysis, and insights, in one integrated platform.