The energy transition has assumed a growing role within the strategies of oil and gas companies. Although this push began with global integrated oil companies (IOCs), the movement has gained steam among companies in our Latin American national oil companies (NOCs) peer group.

While recent geopolitical events have prompted a renewed focus on energy security, the transformation of the traditional upstream, integrated business model will continue. This comes amid the current high oil price environment, which is driving record cash flows and major balance sheet improvements sectorwide. Despite the recent price rise, as well as ongoing concerns about the profits and returns of low-carbon initiatives, S&P Global is seeing an overall accelerated rate of diversification into new energies and focus on lowering greenhouse gas emissions.

As the low-carbon transition advances, NOCs will be critical to helping their home countries achieve targets for greenhouse gas emissions established under the Paris Agreement. These companies account for more than half of oil and gas production and reserves worldwide. Latin America is no exception, with state-owned companies accounting for more than two-thirds of production and reserves worldwide.

Furthermore, developing domestic oil and gas resources will remain the main mission of NOCs for the foreseeable future. In addition to meeting domestic demand, these companies are principal providers of revenues and employment to their host countries. Given their outsized role, however, required emissions reductions within the oil and gas sector cannot be achieved without major contributions from NOCs. As these companies face increasing pressure from shareholders and creditors to decarbonize, NOCs are becoming more mindful of shifting investor sentiment regarding the oil and gas sector.

One determinant of the depth to which NOCs are committed to renewables is their domestic resource endowment. NOCs with a significant reserve base—such as Petrobras (Brazil) and Pemex (Mexico)—are choosing to concentrate their efforts on lowering emissions from their core upstream operations. On the other hand, NOCs with fewer available resources—such as Ecopetrol (Colombia) and YPF (Argentina)—are allocating an increasing share of their capital budgets to finance diversification into lower-carbon sources of energy.

On average, Latin American NOCs have dedicated 7% of total 2022 capital spending toward low-carbon initiatives, compared with the global IOCs, which have on average apportioned 12% of investments to low-carbon ventures. Given the elevated S&P Global Commodity Insights crude oil price outlook for the next several years (our current base-case forecast is for Brent to remain above $90/bbl through 2024), we believe Latin American NOCs will have sufficiently high free cash flow to further grow their low-carbon investments over the near-to-medium term if they choose to do so. 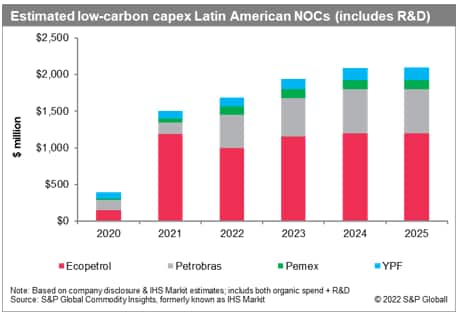 In a recently published report, we detailed what Latin American NOCs are doing to lower their emissions. In our analysis, we covered four of Latin America's largest NOCs: Ecopetrol, Pemex, Petrobras, and YPF, all of which have prominent exposure to a combination of stockholders, creditors, or partnerships with international companies that are under increasing pressure to reduce their carbon footprint. Although the detailed report is reserved for subscribers of S&P Global Commodity Insights' Companies & Transactions Service, the matrix below summarizes what Latin American NOCs, as well as other companies, are doing to lower their greenhouse gas emissions. 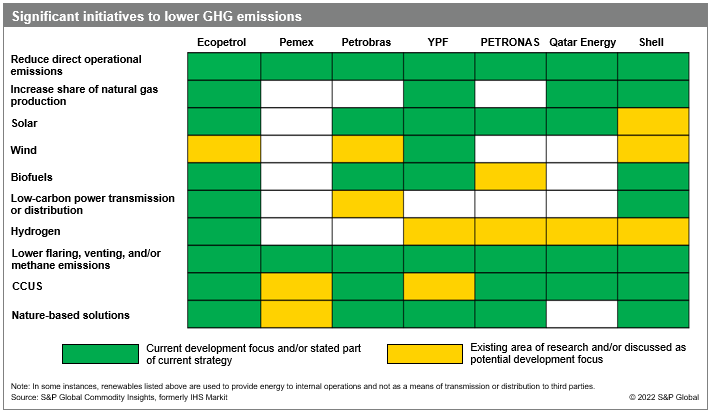 Want to learn more on this topic and access similar reports? Try free access to the Upstream Demo Hub to explore selected energy research, analysis, and insights, in one integrated platform.