New global sustainability board aims to cut through disclosure confusion

The confusing world of competing sustainability reporting frameworks and standards guiding companies and investors on ESG disclosure could soon get a little simpler.

The 26th U.N. Climate Change Conference, known as COP26, is scheduled to take place in Glasgow in November. And by the time it begins, the IFRS Foundation responsible for setting global accounting standards plans to create a new International Sustainability Standards Board. The new ISSB will guide companies on what sustainability disclosures ought to be made to investors to supplement financial statements.

A multitude of sustainability reporting standards already exist, including the Global Reporting Initiative; the Task Force on Climate-related Financial Disclosures, or TCFD; the Sustainability Accounting Standards Board, or SASB, which recently merged with the International Integrated Reporting Council to become the Value Reporting Foundation; and the Climate Disclosure Standards Board — to name just a few. 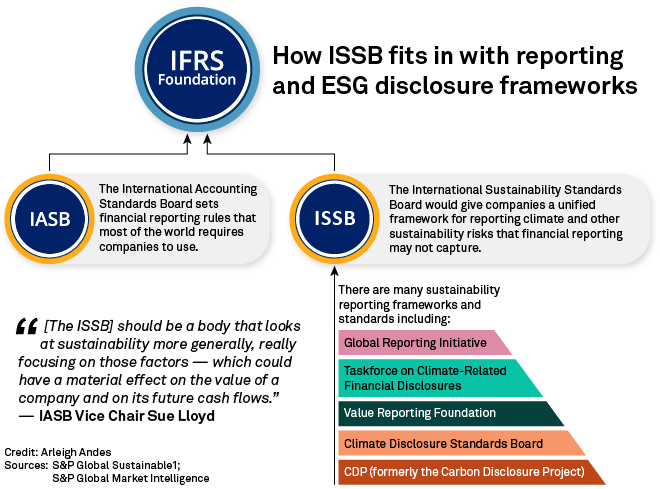 The sheer number of frameworks and standards has led to confusion and inconsistent disclosure in the market.

Investors are clamoring for this to change, according to Sue Lloyd, vice chair of the International Accounting Standards Board, or IASB, which is the accounting standard-setting body of the IFRS Foundation.

The Foundation is launching the ISSB to create standardized ESG reporting rules that will complement the IASB’s financial accounting regimen, which already requires companies to consider climate risk in their accounts when it is material.

It held a consultation in 2020 to gauge demand for global sustainability standards and whether it should help set them.

"The main thing we heard was that, yes, there is a strong, growing and urgent demand for there to be an improvement in global consistency and comparability and sustainability reporting, and that people wanted the Foundation to take a role here," Lloyd said in an interview.

The new board is slated to focus on climate first because investors consider it one of the most important sustainability topics. It will use the TCFD and other sustainability reporting frameworks and standards as a base to "provide the board with a quicker start," Lloyd said.

The ISSB wants to pull all the different standards together in a format resembling an IFRS standard, Lloyd said. The board will also seek to create “a presentation standard that would comment more generally on what sustainability information for investors should look like, whether it's climate-related or on other topics,” she said.

In the run-up to the ISSB's creation, a stakeholder group is preparing a list of high-priority ESG-related topics for the board to examine upon its establishment, Lloyd said. That group is composed of representatives from sustainability reporting organizations including the Climate Disclosure Standards Board, the TCFD and the Value Reporting Foundation.

"The other important piece of feedback [from the consultation] was: It shouldn't just be a climate standards board. It should be a body that looks at sustainability more generally, really focusing on those factors — which could have a material effect on the value of a company and on its future cash flows," Lloyd said.

The stakeholder group is proposing that under the new standards companies should disclose “all material sustainability information,” Value Reporting Foundation CEO Janine Guillot said during a webinar Oct. 7. The standards will be structured around the four pillars that underpin the TCFD’s work: Governance, Strategy, Risk Management and Metrics and Targets. The standards will be arranged by both theme, staring with climate, and industry-specific disclosures.

As companies focus more on sustainability, they are paying more heed to disclosure frameworks and standards.

As of October 2020, more than 1,500 organizations had expressed their support for the TCFD, more than 5x higher than in 2017, according to the State of Green Business 2021 report, published jointly by S&P Global and Greenbiz Group.  On average, 42% of companies with a market capitalization of more than $10 billion disclosed at least some information in line with each individual TCFD recommendation in 2019.

But it’s important to note that supporting the TCFD isn’t the same as actually making climate-related disclosures. According to the 2020 TCFD status report on about 1,700 public companies for the 2017-2019 period, "companies' disclosure of the potential financial impact of climate change on their businesses, strategies, and financial planning is low." For example, only one in 15 companies disclosed information on the resilience of its strategy under different climate-related scenarios.

Corporations are taking an increasing interest in ESG. In 2020, 1,386 companies took part in S&P Global's Corporate Sustainability Assessment, an annual evaluation of sustainability practices. That compares to just 280 in 1999. 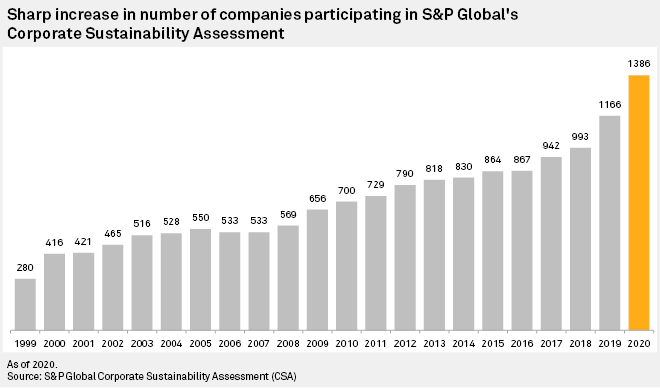 Investors value the different disclosure frameworks and standards already in existence, but how useful they find them varies. According to Edelman Trust Barometer data, 43% of U.S. investors find the TCFD very useful and 52% find it somewhat useful. Regarding SASB, 56% describe it as very useful, and 38% somewhat useful.

The new sustainability standards board will primarily focus on information relevant to investors, rather than on disclosures for broader stakeholder groups or public policy purposes, Lloyd said.

SASB Chair Jeffrey Hales told S&P Global Sustainable1 in an interview that he had seen an uptick in the number of companies using SASB standards primarily because of investor demands.

“They've heard clearly from their investors that this is information that they want, and they're increasingly understanding how the investors are using that information,” Hales said.

The standards that ISSB creates will function like global accounting standards, Lloyd said.

"Similarly here, when the ISSB writes standards, the countries that would apply them and whether they would be mandatory or not is really a decision that would be made by regulators in particular jurisdictions," Lloyd added.

"To get complete disclosures on the types of information that we need embedded throughout all the companies that are being invested in … it's probably going to take a regulatory push to get there," SASB's Hales said.

The U.S. lies outside the international accounting standards set up by the IFRS Foundation. Companies based in the U.S. report under a framework created by the Financial Accounting Standards Board. But the head of the country’s chief markets regulator, Securities and Exchange Commission Chair Gary Gensler, recently said he was "struck by the call for enhanced disclosures" in the SEC’s request for comment on whether to make ESG disclosures mandatory.

The EU is also planning an update of its Non-Financial Reporting Directive, expanding its reach through a new regulation called the Corporate Sustainability Reporting Directive, or CSRD, which will require information on how a company’s business affects society and the environment.

Saskia Slomp, CEO of the European Financial Reporting Advisory Group, which advises the EU on the use of accounting standards within the bloc and developed proposals for the new CSRD directive, said the revised EU rules would contribute to global standards in sustainability.

The European rules “are really contributing to the international sustainability reporting momentum and are actually helping to create this global convergence,” she said in an interview.

New Zealand has introduced legislation to make climate risk reporting mandatory in line with TCFD recommendations, and the U.K. as of Jan. 1 requires commercial companies with a premium listing to disclose against them. Switzerland in August announced it will require large companies to implement the TCFD’s recommendations and report on climate risk. France already requires publicly listed companies, financial institutions and asset managers to disclose their climate risk exposure.

"I think everyone recognizes a global solution is ideal, but global solutions are very hard to actually implement and maintain because of regional jurisdictions," Hales said. "So I think the second best [option] is that regional distinctions end up being part of a building blocks approach … where you might have the IFRS Foundation establish a set of standards that could be applied globally.”