As Texas Digs Out, Plans Proceed to Add 35 GW of Solar, Wind Capacity to Grid

As Texas power plant operators and grid managers revive the state's storm-battered electric system and prepare for an uncertain future, one thing appears unlikely to change: the rapid proliferation of renewable energy resources in the nation's largest power market.

Between 2021 and 2023, developers plan to add roughly 35 GW of combined solar and wind capacity to the state's primary transmission system, operated by the Electric Reliability Council Of Texas Inc., according to the grid operator's most recent data. The near-term additions — which are largely underpinned by financial security deposits for interconnection, federal tax incentives and power purchase agreements — would more than double ERCOT's solar and wind footprint to 64 GW in just three years. Witnesses testifying to a US House of Representatives subcommittee agreed March 24 that the Texas grid needs to winterize its generation fleet and infrastructure, but disagreed about how much renewable power contributed to the massive blackouts during the Feb. 14 winter storm.

Two weeks after a winter storm nearly took down Texas' power grid in February, a software company called Uplight Inc. that promises to make the U.S. energy system more resilient vaulted to unicorn status with a new round of funding valuing the firm at $1.5 billion.

Billionaire Warren Buffett's Berkshire Hathaway Energy is pitching Texas lawmakers on an $8.3 billion proposal to build 10 new gas-fired power plants across the state to help avert another energy crisis like the one last month that left millions of customers without electricity.

The Berkshire Hathaway Inc. subsidiary's proposal would require new legislation to create a regulated utility, the Texas Emergency Power Reserve, that would own 10 GW of new generating capacity and run that generation only when demand outstrips supply, according to Chris Brown, CEO of affiliate Berkshire Hathaway Energy Infrastructure. Texas politicians vowed March 24 to fix loopholes that allowed paperwork failures to keep natural gas facilities from being deemed "critical infrastructure" during the historic February freeze that left much of the state without power for days at a time.

The Southwest Power Pool board of directors and members committee approved March 2 a comprehensive review steering committee to look into the events surrounding the February winter storm that hit the US and caused SPP to direct rotating outages Feb. 15-16.

2020 was very much a litmus test for governance and preparedness by management and boards. The pandemic laid bare companies' resilience (or lack thereof) in dealing with a crisis and being responsive and adaptable. There will be a lot to draw from the experience in the coming years, particularly when assessing how ready companies are to prepare for another systemic challenge: climate change.

The recent events caused by February's winter storm, which left millions of homes in Texas without power have shown the need to prepare for the unexpected.

As energy companies continue to disclose financial impacts from the historic mid-February freeze in Texas, some have begun taking more decisive steps to address the fallout.

The February winter storm unofficially known as "Uri" and its power market disruptions were the catalysts for recent negative rating actions affecting many electric and gas market participants in Texas and the Southwest.

Electricity and natural gas companies continued to warn of potential financial exposure from the February arctic freeze that caused a grid crisis in Texas, with the independent market monitor of the state's grid operator flagging flaws in certain market transactions that occurred during the winter storm.

According to a Reuters report, ERCOT has billed Brazos Electric $1.8 billion after the severe cold weather that caused historic blackouts in the state in February.

Insurers in Texas and surrounding states in the U.S. south are facing losses comparable to hurricane totals in the aftermath of unprecedented winter weather that recently swept across the region

Vistra Stock Drops Sharply as Market Surprised by up to $1.3B in Texas Losses

Shares of the largest power generator in Texas plunged Feb. 26 as markets seemed taken by surprise by Vistra Corp.'s disclosure of a financial hit as large as $1.3 billion from the recent Arctic freeze.

ERCOT North Hub real-time for April 14 delivery jumped to more than $100/MWh, rising from the previous price of $40/MWh, while the corresponding balance-of-the-day contract traded above $200/MWh, up from about $47.50/MWh.

Over the weekend, the contract also traded higher, reaching $216.50/MWh on April 11. This was the highest price since mid-February, when the region experienced prolonged extreme winter temperatures, which resulted in widespread power outages and all-time record high power and gas prices.

The Public Utility Commission of Texas' newest member will hear on April 7 about what caused half the Electric Reliability Council of Texas' generation fleet to go offline during the Feb. 14 winter storm, which cut power to more than 4 million customers.

As policymakers continue to assess the damage wrought by devastating blackouts in Texas and neighboring states, the Federal Energy Regulatory Commission on Feb. 22 announced it will look into potential market manipulation as natural gas and electricity prices soared during the days-long event. The Federal Energy Regulatory Commission will seek feedback on the scope and function of an Office of Public Participation it is creating that could play an important future role in the commission's natural gas project siting and its power sector oversight.

The commission plans a workshop on April 16 to help gather public views on the office, and in a Feb. 22 notice asked stakeholders to provide input on a handful of topics.

Congress in December, as part of an omnibus spending bill, reaffirmed the direction first given to FERC in the Public Utility Regulatory Policies Act of 1978 to establish such an office.

Temperatures dipped far below normal levels in the mid-region of the US during the week ending Feb. 19, causing substantial production freeze offs and power outages at refineries, terminals, and processing plants. Oklahoma and Texas were particularly impacted by the extreme cold weather, with portions of those regions dipping to 40 degrees below normal temperatures for this time of year.

On the supply side, the impact from freeze offs peaked on Feb. 17 with 4 million b/d of crude being offline, resulting in production being down 2.5 million b/d on average during the week. Approximately 90% of the losses were estimated to be back online early the following week. The freeze offs also caused 20+ Bcf/d of natural gas to be offline at the storm's peak. 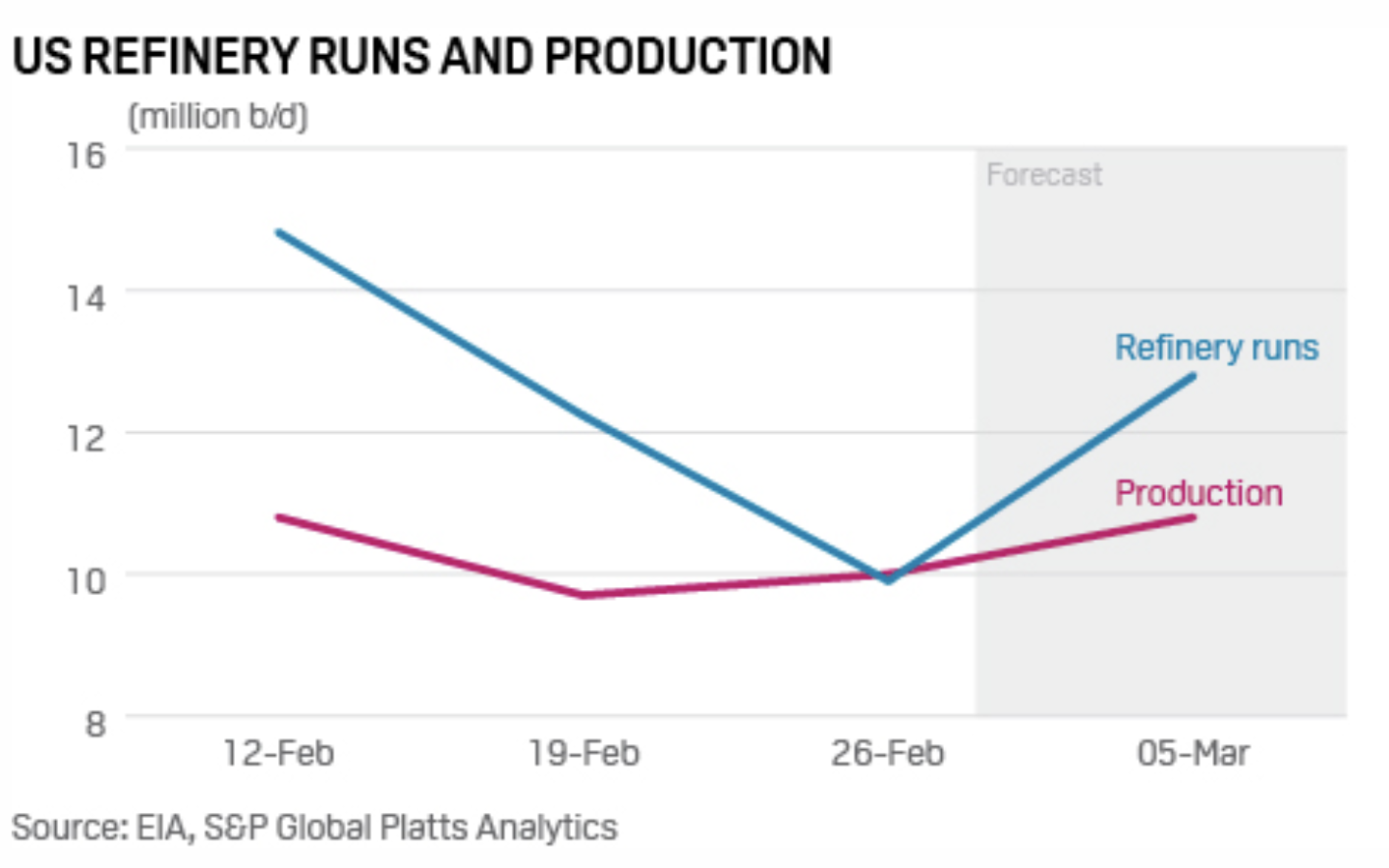 Texas manufacturing activity in March reached the highest level in the 17-year history of the Federal Reserve Bank of Dallas' monthly survey, results released March 29 show, but wholesale power prices so far have been weaker than in March 2020, when pandemic-induced lockdowns began.

U.S. Gulf Coast petrochemical producers were working to restart facilities that shut when a deep freeze hit the region the week of Feb. 15, but those efforts faced ups and downs amid detailed damage assessments.

Most U.S. Gulf Coast petrochemical plants that were shut when sustained sub-freezing temperatures hit the region in mid-February have resumed operations or expect to restart by the end of March.

Storage inventories decreased by 52 Bcf to 1.793 Tcf for the week ended March 5, the US Energy Information Administration reported the morning of March 11. The withdrawal was weaker than the 65 Bcf draw expected by an S&P Global Platts survey of analysts. It was also less than the 72 Bcf draw reported during the same week last year and the five-year average withdrawal of 89 Bcf.

U.S. Gas Exports to Mexico Ramp Back Up Amid Texas Supply Doubts Forward gas traders in East Texas are pricing in tighter market balances than previously expected for 2021, as the lingering supply impact of this winter's historic freeze meets with stronger export demand.

At the nearby Katy Hub, prices have traded at an average 13 cent discount, S&P Global Platts data shows. By later this year, forward traders are anticipating a major turnaround, pricing both locations at near-parity to Henry Hub during the upcoming summer months.

Historically, the East Texas price discount to Henry Hub often narrows during peak-demand months. The outlook for this summer, though, has strengthened over the past five weeks following this winter's historic freeze-off and its impact on Texas gas production and storage. 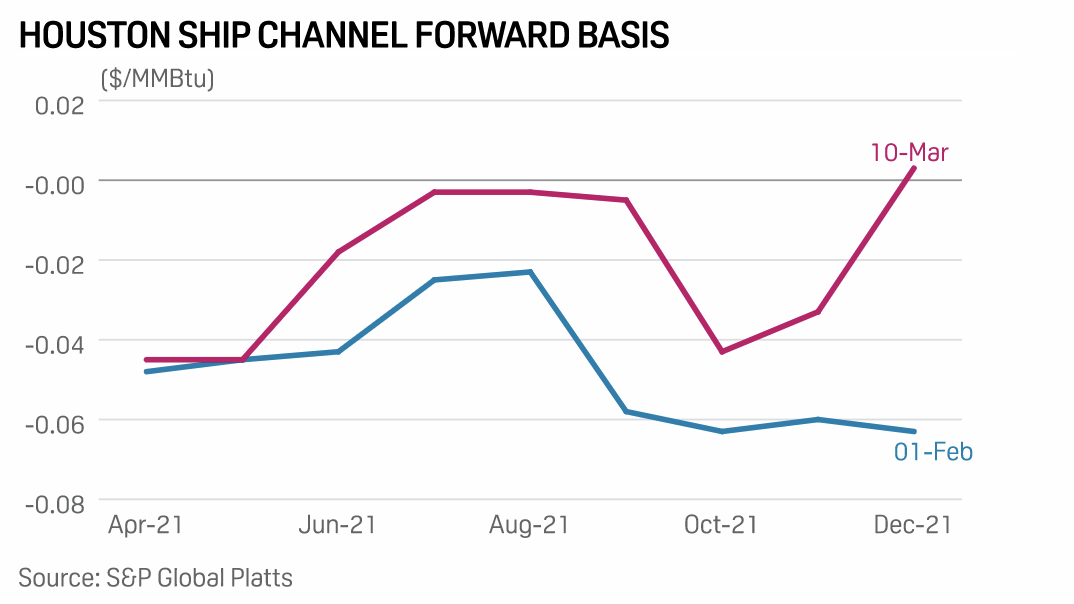 U.S. polymer prices showed significant jumps March 2 as market activity inched back up in the aftermath of sustained sub-freezing temperatures along the U.S. Gulf Coast in mid-February that forced widespread production shutdowns.

February Spot Gas Values in Parts of U.S. Grew by 900% Month Over Month

The average price of natural gas for day-ahead delivery in February grew many hundredfold from the prior month in most regions of the U.S.