Used cooking oil or UCO, long a staple in the kitchen, is now powering the engines of aircraft and ships.

With temperatures rising across the globe, the search for alternative fuel to reduce carbon emissions is getting more imperative. Sustainable aviation fuel and marine biofuels, which both count used cooking oil as one of their feedstocks, are among the available alternatives as a drop-in fuel utilizing existing technologies and infrastructure.

In 2016, member states of the International Civil Aviation Organization adopted the Carbon Offsetting and Reduction Scheme for International Aviation, or CORSIA, to stabilize the industry's net carbon emissions from 2021.

As a result, all airlines were required to report their CO2 emissions on an annual basis and SAF can be used as a tool to reduce carbon emissions.

On the marine side, the International Maritime Organization is aiming to reduce international shipping industry's greenhouse gas emissions by at least 50% by 2050 from 2008 levels.

In response to the growing need of airlines and shipping, companies had started trialing biofuels.

In early July, Singapore Airlines and Scoot started fueling up with blended SAF at Changi Airport. SAF is supplied by Neste at ExxonMobil's Singapore facilities.

Used cooking oil is a major feedstock in the production of SAF, UCO methyl ester (UCOME) and hydrotreated vegetable oil, with China being a major supply source. 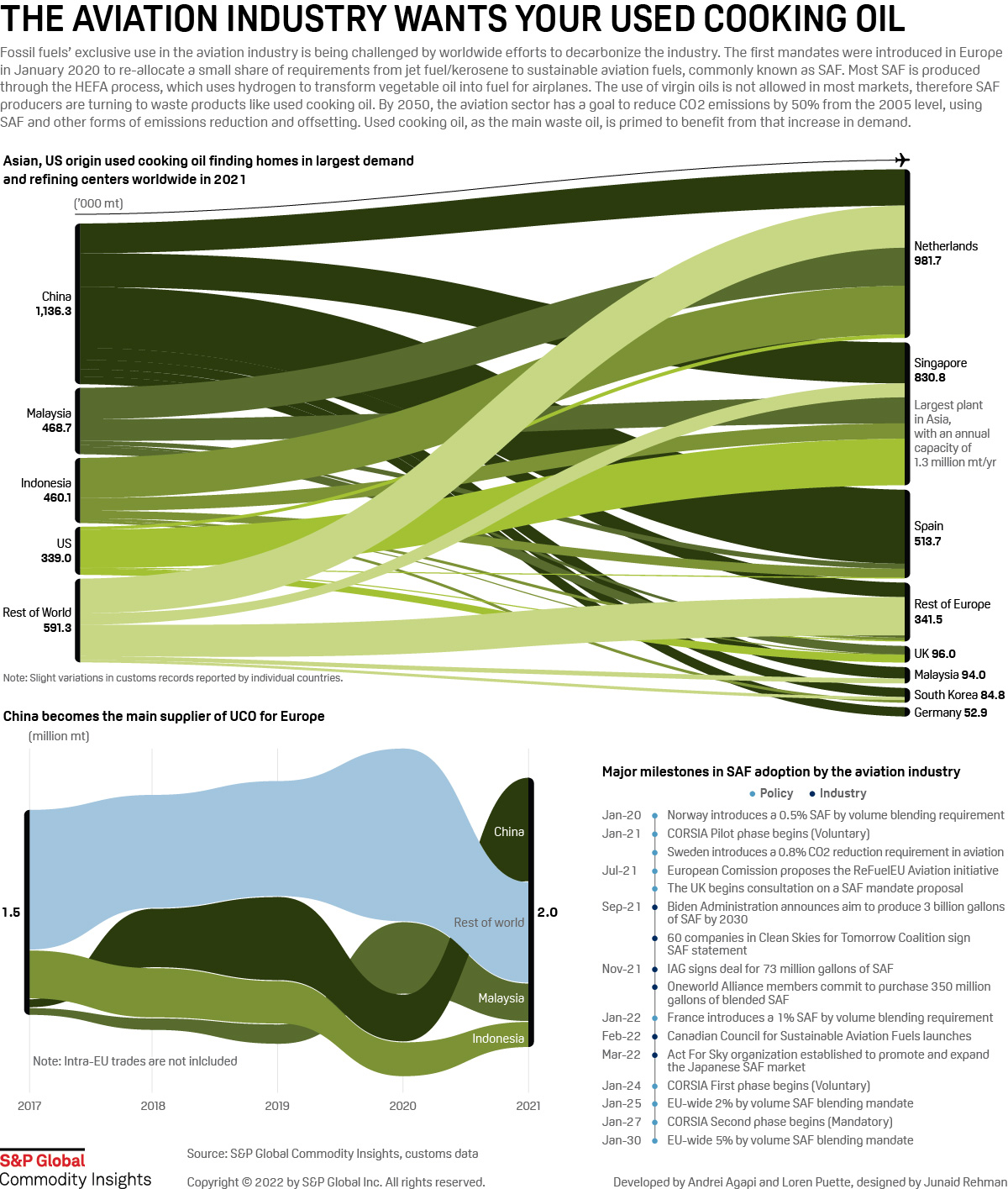 Interest in Chinese UCO started picking up in 2018 with a total of 573,653 mt in exports, according to China's customs data. Majority of the exports went to Europe, with packaging was initially done mostly in flexibag containers. In 2021, the market shifted toward bulk shipment as major players ramped up storage capacities across the mainland to facilitate transportation. By 2021, China's UCO exports have jumped to over 1 million mt.

Bulk of China's UCO exports were sent to Spain, Netherlands, Germany and Italy to meet the European biodiesel mandate.

Singapore, home to Neste's renewable production hub, has also been on the receiving end of UCO from China. In 2021, UCO exports from China to Singapore reached 205,497 mt, a massive hike versus 9,816 mt in 2019, reflecting the growth in UCO demand as part of Neste's feedstock mix.

The thirst for UCO led to the establishment of supply chains in Malaysia, along the straits, to capture UCO in the Southeast Asia region such as Thailand, Vietnam, Malaysia and Indonesia.

While China has not fully utilized its UCO potential, countries such as India, Philippines and Vietnam are potential places where UCO may be sourced.

A two-tier market for UCO forms

While SAF, HVO and UCOME use the same feedstock, UCOME is offered at a lower level than SAF, resulting in a two-tier market for UCO.

SAF and HVO manufacturers are increasingly paying a slight premium to UCOME manufacturers as their profit margins are higher, tilting UCO flows in their favor, which market participants expect will continue.

Neste Singapore in 2019 launched a major expansion plan with an aim to double its overall renewable product capacity by end of Q1 2023 from the current 1.3 million mt annual capacity. Neste is the premier supplier of HVO and SAF across the globe and HVO produced in Singapore had been exported to the US and Europe.

Analysts at S&P Global Commodity Insights estimate around 2 million mt of UCO will be required in biomass-based diesel production in Asia by 2025. The US will need about 3.75 million mt of UCO and the EU 5 million mt. Other countries like Brazil, Canada would require below 1 million mt, with the world total reaching around 11 million mt.

In response to the growing importance of Asia's place in the trade flow of UCO and UCOME, S&P Global is launching Platts assessments for UCO and UCOME basis FOB Straits and FOB China effective Aug. 1.