Interrelated Economics, For Better or Worse

The fortunes of the petrochemical industry have long been intertwined with those of crude oil. Because crude oil and its derivatives serve as feedstocks for petrochemicals, rising and falling crude prices directly affect the production, investment, and financial decisions of petrochemical companies.

The oil market moves in cycles, in which there is a surplus or tightness in the market with prices that rise or fall accordingly. From 1960 to 2012, there have been four oil cycles, with two periods each of surplus and tightness. For example, from 1981 to 1998, a cycle of surplus saw average annual crude prices fall in 13 of 18 years. A cycle of tightness in the oil market from 1999 to 2012 produced limited surplus production capacity, and prices rose in 12 of those 14 years. Starting in 2013, the market has entered into what appears to be a fifth cycle that could be another period of surplus ("the Shale Era"), with plenty of uncertainty regarding how long the oversupply may last. 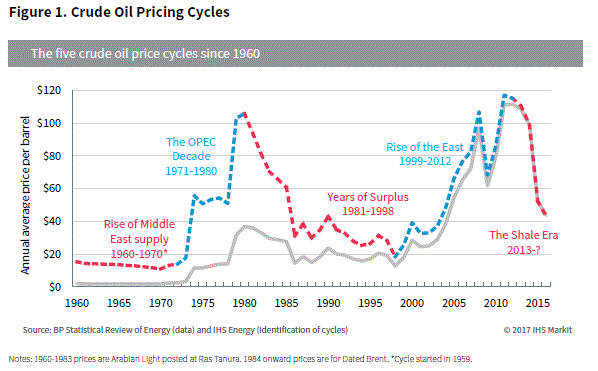 Traditionally, rising crude oil prices will drive up petrochemical costs as well as market prices for many downstream chemical intermediates and plastics. While the influence of crude oil on petrochemical costs remains unchanged, energy markets continue to evolve and the investment implications for the petrochemical industry have become more complex. In the 1990s, prices for both crude and natural gas were low. Values for these energy sources were relatively close on a $/MM BTU basis, neutralizing any cost advantage of a particular feedstock. For petrochemical investors, technology and location relative to demand growth, were more important factors than energy prices.

Starting in the year 1999 and continuing through 2012, crude markets experienced what is called the "Rise of the East", as a variety of energy market developments changed the investment and profit dynamics of the global chemistry industry. Crude oil prices began to rise to levels that were well above historic norms, raising the cost base for petrochemicals and derivatives that were produced from naphtha. The crude-dependent chemical markets became less competitive as a result, inhibiting investment for many years. At roughly the same time frame (2000-2001), natural gas prices began trending higher in North America, to the point where the once indifference to BTU deltas between crude oil and natural gas turned into a distinct disadvantage for the region. As a result, new investments in petrochemicals paused for a long period of time in the region and some assets were shut down.

After a correction in 2009, crude oil prices began to rise quickly, eventually trading at over $100 per barrel by 2011. (See Figure 2.) Natural gas prices hovered between $5 and $10 per million BTUs from 2003 to 2008, and then starting in 2009 declined below $5 per million BTU, and have remain at a low level since. From 2010 to 2014, the significant differential between oil and natural gas prices started attracting investment back to the North American petrochemical market. 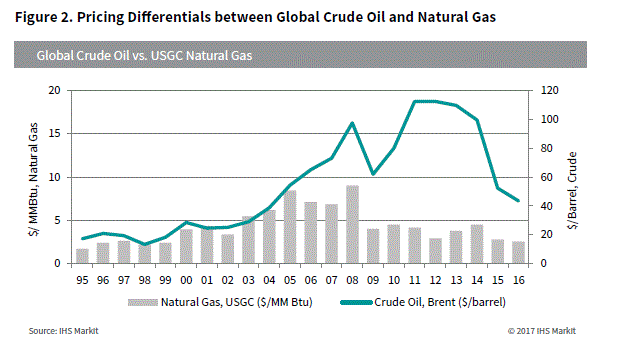 This cost differential continued through 2014. At its December meeting that year, OPEC ministers decided not to cut production, allowing market forces to shape supply and demand. The resulting market oversupply led to a virtual collapse in crude oil prices, which affected energy producers around the world. The most significant impact was felt by North American companies, which had rapidly ramped up production of new shale plays. Falling crude prices led to a significant downturn in shale oil production in the second half of 2015 and all of 2016. For petrochemicals companies that rely on naphtha, declining crude prices were good news. Feedstock became less costly, yet demand for their products was still strong and prices for intermediates and plastics, while lower, still yielded significant improvements in cash margins. At the same time, firms that bet on gas-based chemistry to product products - such as ethylene and propylene - saw the advantages of a low-cost feedstock evaporate, as their cost position remained unchanged as product prices declined.

The Case for Increasing Capacity Investment

Over the last three decades, petrochemical investment responded fairly predictably to the economics of each oil cycle. New chemicals capacity grew more slowly during tight oil cycles and faster during periods of surplus. (See Figure 3.) During these years, capacity increasingly shifted from Europe and North America to the Middle East and China. 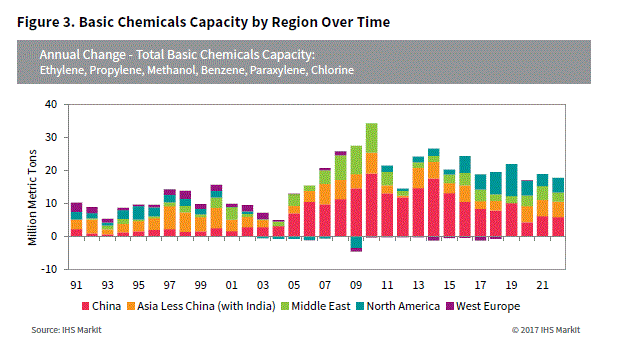 Yet changing energy market dynamics have created a high degree of uncertainty around long-term oil demand and energy market supply. This rising ambiguity is causing petrochemical decision makers to reconsider the pace and direction of their capital investments. In fact, IHS Markit has seen a collective pause in investment decisions for capacity that would come online in 2020 and beyond.

Let's consider the key facts. IHS Markit research points to rising energy demand. Since the end of the most recent tight market in 2012, world oil demand has increased a cumulative 5.2 million barrels per day. Although China's economic growth has slowed to approximately 7 percent, regional demand is merely decelerating, not collapsing.

Meanwhile, demographic trends in India and Africa may result in stronger-than-expected energy consumption. By 2020, the world's working age population is expected to grow by 231 million people to more than 5 billion total. Nearly 70% of this increase will occur in India and Africa, where oil consumption has been low. Population growth there could create a spike in energy demand.

Furthermore, large numbers of the poor are moving into the middle class. From 1990 to 2010, the number of people who live in extreme poverty fell by nearly 1 billion. Upward mobility correlates strongly with an increase in the consumption of goods, many of which use petrochemicals as their base materials.

On the supply side, US oil production rates have dropped by 1 million barrels per day since April 2015.

If predictions for a healthy, growing global economy are correct, energy demand will continue to grow. To keep pace, petrochemical capacity must rise. Any sustained pause in investment may cause tight market conditions, with supply falling behind demand. 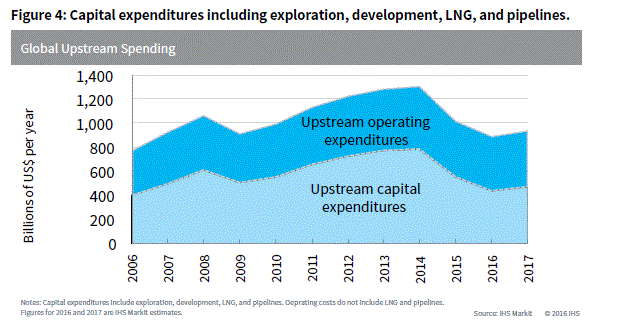 The Path for Growth

As energy demand fluctuates and prices rise and fall, the investment thinking of the chemical industry shifts. What makes sense in one region of the world may be pure folly somewhere else. Countries with cheap raw materials - such as Iraq, Iran, North America, and developing areas in Mexico, Argentina, and Brazil - are likely to take early advantage of new investment opportunities. In these areas, for example, chemical companies should have unrestricted access to naphtha feedstock at low to moderate prices for the next several years.

Yet fortune favors the bold. If these chemical firms do not invest in new capacity, or should OPEC not be able or willing to increase production to keep pace with demand, the picture may change. Continued high demand from countries such as China and India will likely drive up energy prices. These conditions may incent producers in other countries to invest in less advantaged feedstocks, such as naphtha and potentially coal in China. In Southeast Asia, high demand unmet by established producers may even motivate local companies to build their own facilities to satisfy the appetites of a burgeoning middle class.

Further ahead, the market may be changed again by innovative technologies that disrupt the crude-to-chemicals supply chain. IHS Markit continues to survey the development of chemical processes that promise to produce high volumes of feedstock at low cost, which could lead to a global oversupply. Until it becomes clear which feedstocks will be affected, it will be difficult to determine which industry supply chains could be disrupted and which could benefit.

Energy-based scenarios and their impact on investment are complex and ever-changing.A scenario-based framework, combined with proven industry expertise, can help executives test and enhance the robustness of their investment assumptions and decisions.