Tom Stoppard wrote the following: "Skill without imagination results in useful products such as wicker baskets while imagination without skill gives us modern art." But what about skill and imagination? In my view, this combination gives us petrochemical process technology (admittedly I am biased)! Why do I say this? Think about it. The petrochemical industry literally takes fire, earth, air, and water and produces all of the plastics, rubbers, and fibers that allow modern living. Surely, that takes both skill and imagination, in large measures. 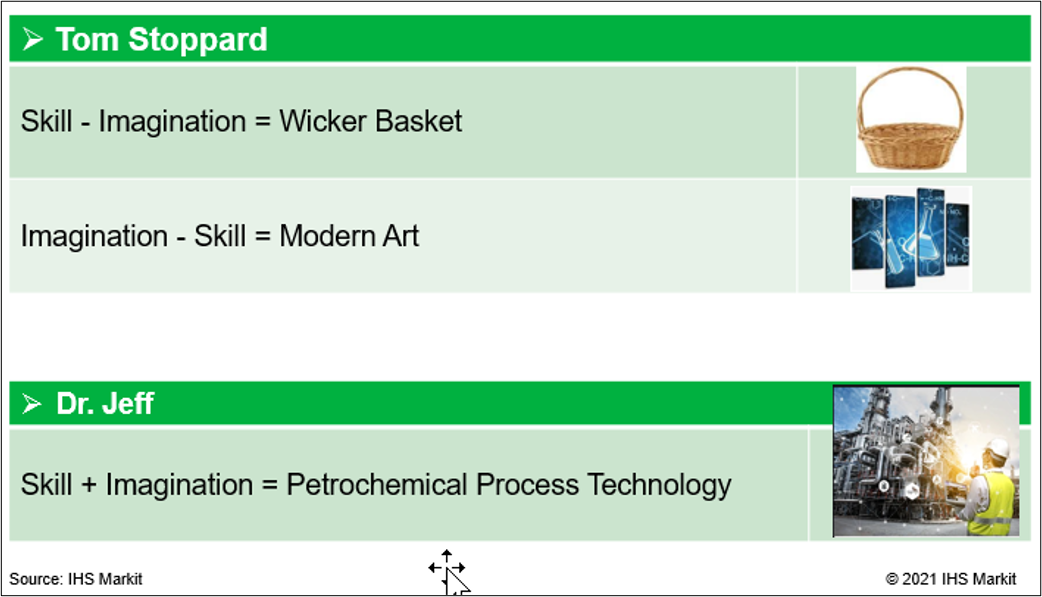 As just one example of the skill and imagination inherent in the petrochemical industry, one of my favorite topics is the absolute beautiful development of process technology to make propylene oxide. Propylene oxide (PO) is a relatively simple molecule, but not easy to make. Unlike ethylene oxide, which can be made by direct oxidation of ethylene using silver-based catalysts, PO cannot be made by direct oxidation as the "third" carbon is too sensitive to oxidation and is too easily burned to CO2. 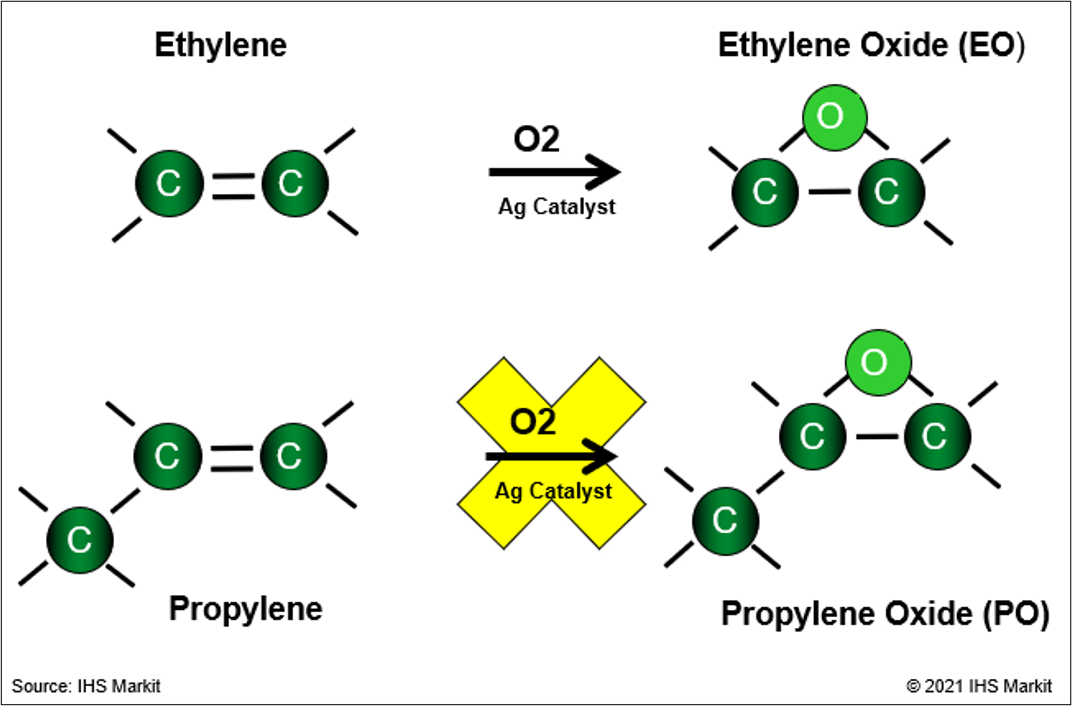 In the 1969-1972 timeframe, there were two breakthrough peroxidation technologies developed for making PO. Both approaches make co-products, either t-butyl alcohol (TBA) which is used as an intermediate for making MTBE or, in the other approach, styrene monomer. Currently, LyondellBasell and their partners Covestro, Shell Chemical, Repsol, Indorama Ventures, Huntsman, and SK Chemical operate one or both of the co-product technologies.

Another round of process innovation occurred with the development of two so-called co-product free routes. Sumitomo Chemical developed the first of the co-product free technologies in 2003 with their cumene recycle route. In 2008-2009, the Dow/BASF partnership resulted in a route based on using hydrogen peroxide as the oxidant and, at almost the same time, Evonik independently developed a similar approach.

As shown on the chart below, all five of the PO technologies are still employed. The first-generation chlorohydrin route is still in use but is considered to be high cost with only chain integrated chlor-alkali producers participating. It is unlikely that chlorohydrin technology will be selected for future projects, especially as China in now pursuing stricter environmental policies. 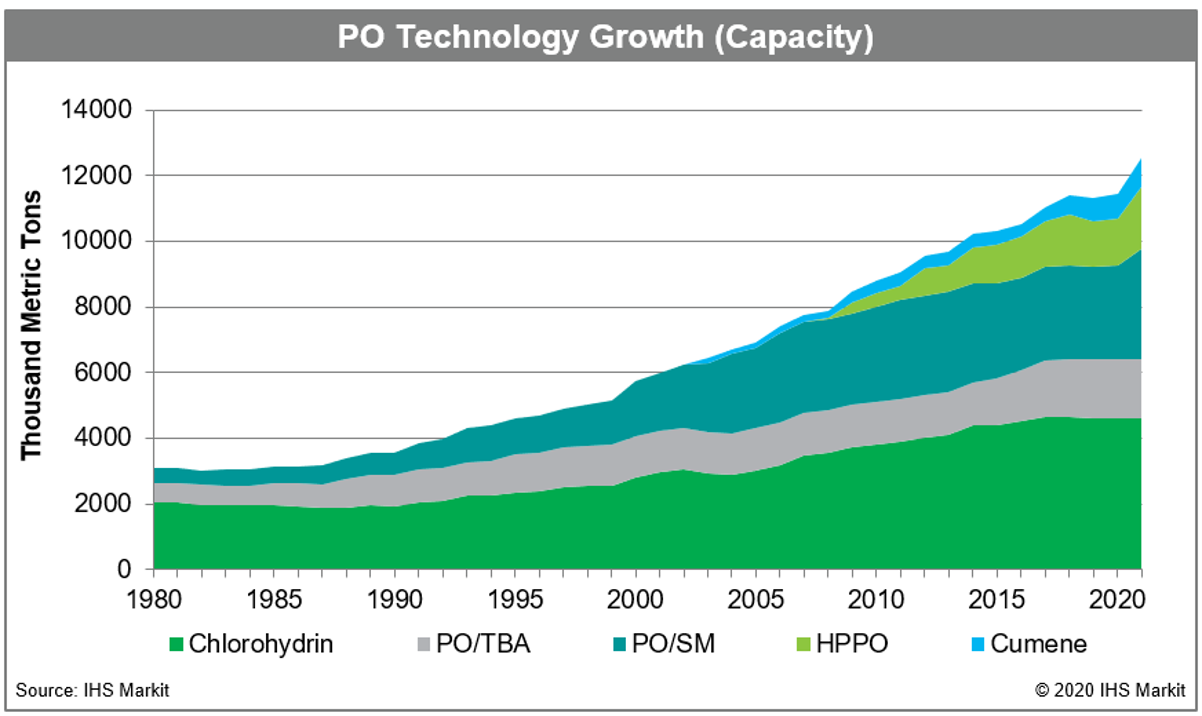 The co-product routes combined comprise over 40% of global PO capacity with styrene co-product being the larger of the approaches and is projected to be the favored approach going forward as MTBE demand is being negatively impacted by the Chinese mandate to use ethanol in gasoline.

The hydrogen peroxide route (HPPO) is the newest of all the routes but has grown quickly since 2009 and now comprises 20% of capacity share. HPPO has the advantage of not being tied to the market ups and downs of any co-product but requires a co-located hydrogen peroxide plant as long distance transport of hydrogen peroxide is not feasible as it is highly perishable.

The cumene recycle process is the least employed of all of the PO technologies. This route, like the HPPO process, also enjoys the advantage of making no co-product but suffers from higher variable and fixed costs than the co-product routes, excluding the credit for the co-products.

The key use of PO is in the manufacture of polyether polyols used in polyurethane production. The value chain associated with polyurethanes is also another great example of skill and imagination. I am sure this area will be covered in a future blog.

For additional Petrochemical information, check out some of our training courses on the IHS Markit's Learning Center at: