There’s life in the cold fleet yet

The past 18 months have seen a surge of cold-stacked units leaving the drilling fleet. Two downturns in relatively quick succession, certainly before a truly global recovery took hold after the first, meant a significant oversupply in the market. Overall, it has been older semis and jackups hitting the scrapyards, though some relatively young units, less than 10 years old, have also been deemed surplus to requirements as well as an increasing number of drillships. Now, with the market tightening, a number of units have either been earmarked for reactivation or the process is already underway. In addition, rig conversions have been hitting the headlines with steadily increasing regularity in recent months.

Jackup conversions have dominated, especially in the Far East market, with multiple rigs now headed for a life in renewables. At least two CNPC jackups have been converted for use in wind installation work. Likewise, Sinopec Offshore Oilfield Services is converting another for similar work. These are all part of a recent flurry of conversions as coastal areas rush to install turbines before the eligibility for new wind power subsidies from the government (secured in 2019 and 2020) expires at the end of the year. Meanwhile, a number of COSL units are in the process of conversion and will no longer be marketed as drilling rigs. Going forward two of the units will be undertaking accommodation work while a third will function as an early production system (EPS) MOPU.

Overall, while a select number of units in the Far East are heading for a new life in renewables, globally the majority continue to be converted to production or FLNG units. As such, earlier this year New Fortress Energy announced it was buying two jackups for FLNG conversion. The company announced that the "Fast LNG" design pairs the latest advancements in modular, midsize liquefaction technology with jackup rigs to enable a much lower cost and faster deployment schedule than floating liquefaction vessels. Meanwhile, some notable MOPU-conversions include a duo of former Borr Drilling jackups that were purchased by BW Energy Gabon for conversion into production facilities. The decision to take on these older drilling units was made due to their "significantly reduced" cost compared to an installation of a traditional platform. BW Energy also made a rare semi purchase for conversion recently by acquiring Leo from Aquadrill. The rig will be converted into a floating production unit (FPU) for use in the Kudu gas field off Namibia.

Operator Perenco, alongside entity Dixstone Holdings, is one of the most prolific purchasers of former drilling units for conversion. Most recently, in the UK sector, the former Paragon HZ1, now Haeva, has been converted to a well-intervention unit for hydrocarbon free decommissioning work in the UK sector. Also, in the North Sea, where plugging-and-abandonment scopes are becoming ever more frequent, Well Safe Solutions purchased two ex-drilling rigs to convert for its P&A fleet. The units, semi Well-Safe Guardian and Well-Safe Protector, are in the rare position of continuing to compete for the same P&A scopes as drilling rigs in the region.

On the flip side of conversions, the number of rigs being reactivated from cold stack is picking up pace. With a number of units quickly cold-stacked following the oil-price crash and beginning of the pandemic in early 2020, availability has begun to tighten globally. As such contractors are beginning to take those more recently cold-stacked units and marketing them for scopes that are long term enough to be worth pulling them from stack.

Valaris has been leading the charge on such reactivations with no less than three drillships currently being reactivated in the Canary Islands. All are destined for long-term work in the Americas. Meanwhile, there have been at least five semi reactivations since the 2014 downturn with the majority of these being due to their respective captive markets, i.e. harsh-environment, or for temporary non-drilling work where a high-spec rig is not required. It's a similar story in the jackup market where at least 20 units have been reactivated in the past decade, often for work where cheaper, less high-spec jackups are preferable.

The drilling rig market is inevitably tightening, particularly in the deepwater drillship segment where demand is picking up in the 'Golden Triangle' of West Africa, South America and the US Gulf. But for older units, a life beyond drilling remains attractive to operators looking for more economic solutions for MOPUs, well-intervention, P&A work or accommodation. 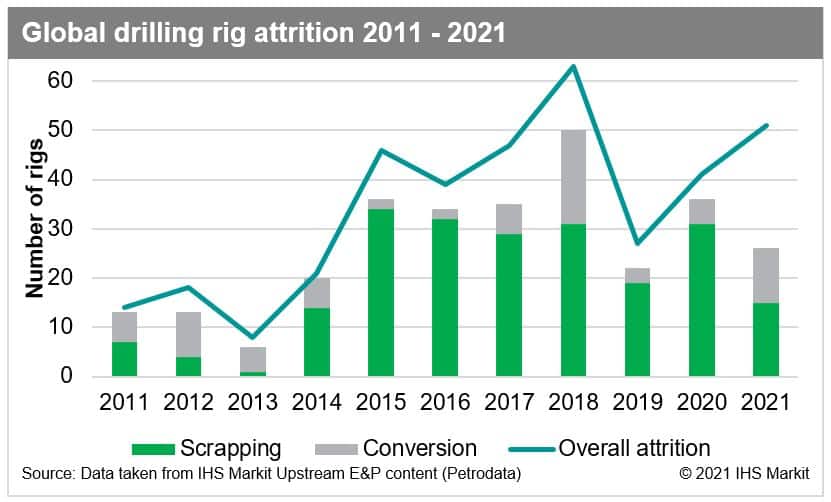 Gain greater insight into the global offshore rig market with RigPoint - Learn More. RigPoint is the leading and most trusted information source for the global offshore drilling rig market. The platform provides data and reports on the industry dating back to 1984 and offers unparalleled information on rig supply, demand and specifications. It is maintained by a team of analysts with a combined 90+ years of experience on reporting the offshore rig market, with access to IHS Markit's deep knowledge and understanding of upcoming exploration plans, field developments and the upstream sector, provided by around 900 analysts and experts.