For those that might have missed it, a company that few had heard of a year ago is riding an investor-fuelled wave which has led to its market capitalization move from a little under USD 20 million in March 2020 to more than USD 1.2 billion in June 2021. To call its performance meteoric would be an understatement - Reconnaissance Energy Africa Ltd (TSX-V: RECO) (ReconAfrica) makes Bitcoin's year look humble.

Pure play explorers (companies with very limited portfolio diversity) with onshore acreage within basins that play host to Permian aged sediments are attracting significant investor support. So much so that the traditional exploration model for small market cap explorers seems to be in question (small caps can self-fund at least during the initial exploration phase including drilling).

In this article we will look at five essentially pure play listed companies with assets onshore within basins that play host to Permian aged sediments in southern Africa. Of the five companies two are pure play explorers (ReconAfrica and Invictus Energy (ASX: IVZ)), two are moving towards production (Kinetiko Energy Limited (ASX: KKO) and Tlou Energy Limited (ASX: TOU)) and one will start producing from the first onshore LNG facility south of the Angola LNG plant in 2021 (Renergen Limited (ASX: RLT)).

As ReconAfrica's otherworldly performance is driving interest, we will pay particular attention to this. The other four companies help to place ReconAfrica in the wider context of Permian aged exploration and production in the region. 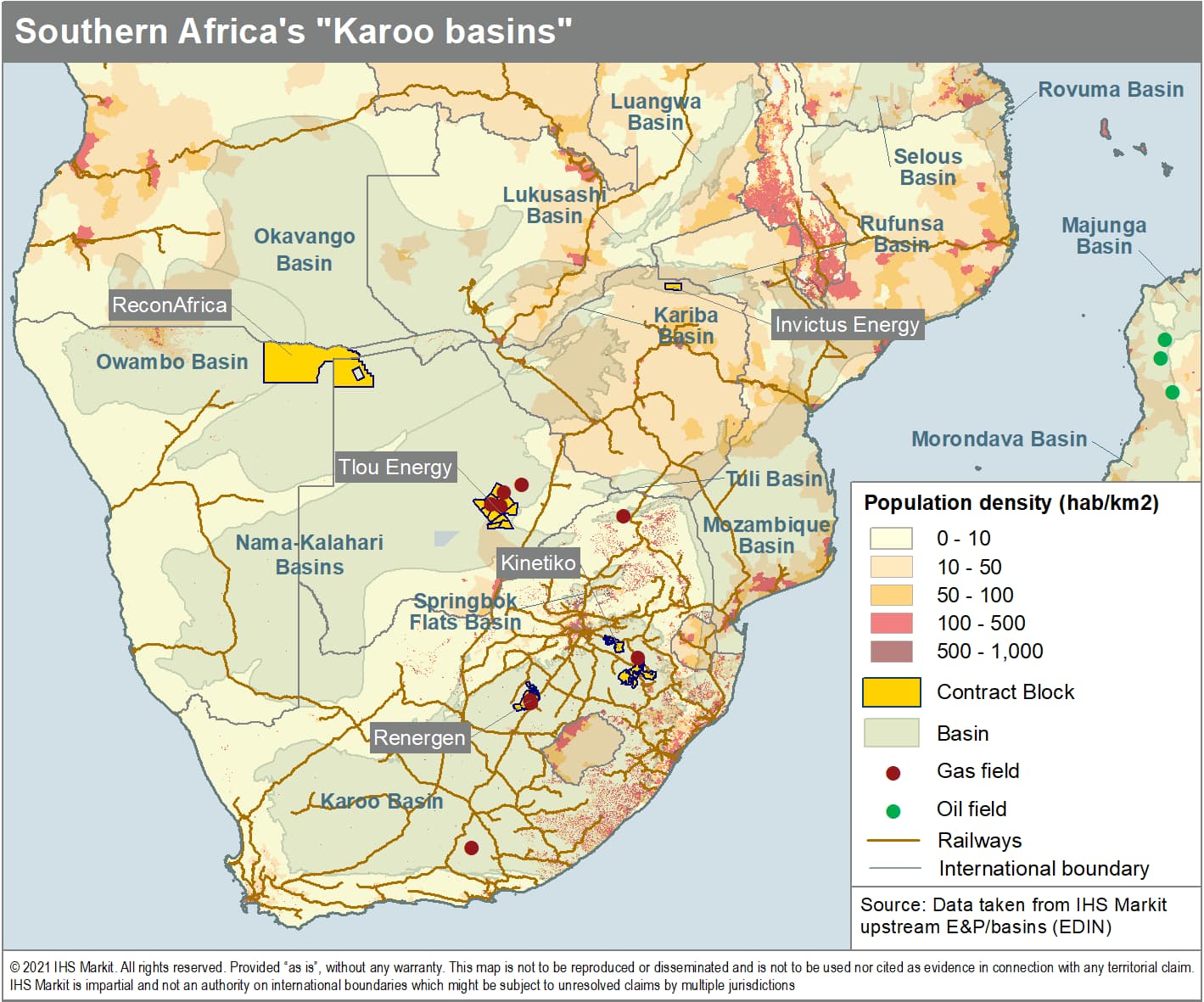 So, where does that leave us? Well, ReconAfrica is targeting Permian aged formations. As mentioned, thus far within the region these have yielded primarily unconventional CBM discoveries, alongside those two with conventional gas reservoirs. Tlou Energy is currently progressing towards a CBM to power project in Botswana and Kinetiko recently received a bulk gas production and removal grant (production by Kinetiko will at least initially be conventional). Also, of note is that the South African Council for Geoscience is currently drilling a deep stratigraphic well within the Karoo Basin aimed at assessing the shale gas potential. The initial results seem to suggest shale gas potential in what is assumed to be the Whitehill Formation. The reason for mentioning this is that the Karoo Basin, with which ReconAfrica draws an analogy, is the target of unconventional exploration (central southern portion); however, ReconAfrica has mentioned that it is focused on conventional targets. Of course, Permian source rocks do provide regional viability as potential source for conventional discoveries, so this is a possibility. It is however interesting that ReconAfrica would make the comparison given its conventional focus.

So why has ReconAfrica attracted so much investor support? 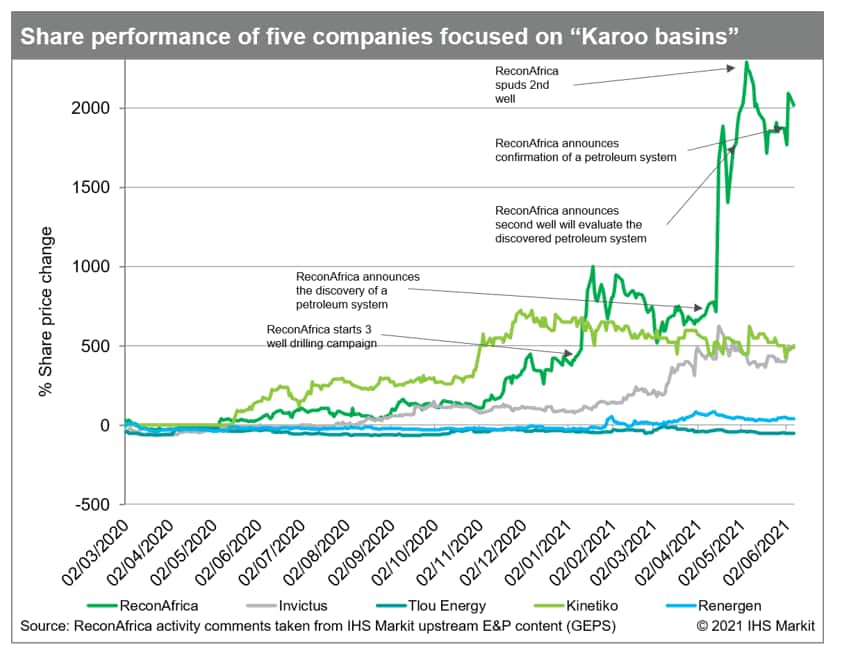 Answering this is somewhat more difficult. From the chart above one can see that both ReconAfrica and Invictus have performed well and with the exception of Kinetiko, better than others that are more advanced with regard to achieving production. So, the pure play explorers seem to be receiving investor backing, perhaps more so than others. That said ReconAfrica has performed about three-fold better than Invictus.

This may be due to:

So, let's assume ReconAfrica makes a discovery, how much needs to be discovered to be worth USD 1.2 billion in northern Namibia?

We were interested to see what ReconAfrica would need to discover to justify a valuation north of USD 1.2 billion. At the time of writing, ReconAfrica's assets were essentially exploration acreage in Namibia and Botswana and the company held no oil or gas reserves. The fiscal regime for Namibia is good compared with many other established oil producing countries and this is expected - to date Namibia has no oil and gas production and in fact has only one offshore gas discovery. To encourage exploration the fiscal terms must be good, as the perceived geological risk is high. Even though the fiscal terms are excellent a conventional oil discovery with a net present value of around 1.2 billion would need to be in the region of 360 MMbo recoverable (this is if a pipeline is considered to evacuate the oil) however, if as ReconAfrica suggests, the oil is to be trucked and railed to the coast the number climbs to over 600 MMbo. If indeed unconventional oil is on the cards, then a little under 800 MMbo is required under the truck and rail option (an oil price of USD 70/bbl was assumed). Please take note these are not numbers required for a commercial discovery, but rather what would be required to justify a market capitalisation just north of USD 1.2 billion. Indeed, many might argue that far less needs to be discovered as it would derisk the rest of the licence (IHS Markit Vantage). 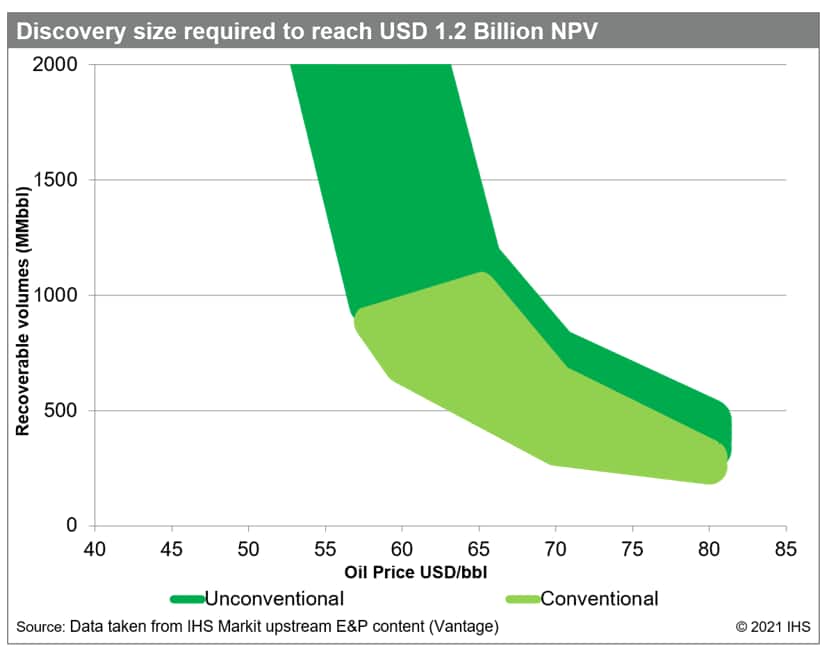 There are a few additional considerations; southern African analogies for the Owambo and Okavango basins (the basins atop which ReconAfrica holds acreage) within the region have delivered gas with the exception of oil from Triassic source rocks in Madagascar - suggesting that gas is a more likely hydrocarbon type within the ReconAfrica acreage. Indeed, Invictus with a licence within the undrilled Rufunsa Basin expects gas and condensate rather than oil and as such has a well-developed commercialization plan and arguably access to a far bigger market.

The location of any potential discovery within northern Namibia would present significant challenges. If indeed a discovery is made, depending on its location within the licence it could be anywhere between 600 km and 900 km from the ocean. ReconAfrica has suggested potential rail and or road transportation options. For an oil discovery this may work albeit adding significant operating costs and the overall CO2 intensity per barrel. If gas is discovered infrastructure would be required and there is only a very limited market within the immediate region (± 700 km from the centre of the licence). In fact, it would likely be far more cost effective to supply the relatively limited energy requirements for the region by renewable energy as opposed to gas to power schemes.

If an enormous gas discovery is made, then a pipeline to the coast and an LNG facility would be required - given the relative abundance of undeveloped gas in Southern Africa it's difficult to see how a landlocked gas discovery could compete (as mentioned above the immediate regional market is limited at best).

Investors are supporting onshore frontier exploration; however, commercialization of potential discovered resources seems to be of secondary concern. Exploration drilling is driving speculation and investors seem to have an appetite for risk.

While "Karoo Basins" may indeed be prospective, analogous basins suggest more unconventional than conventional potential and gas rather than oil.

There are several investment opportunities within Southern Africa's "Karoo Basins" however, for a discovery to ultimately be commercialized, to a degree its size will likely be less important than its location.

Christopher Ellis is a Principal Economist at IHS Markit.

Enrico Pedica is a Geospatial Analyst at IHS Markit.

Cyril Ruchonnet is an Associate Director for African Regional Research at IHS Markit.

Keryn Tsimitakopoulos is an Associate Director of Research for upstream energy at IHS Markit.

Ask our energy experts a question or book 1-1 time