The ongoing energy crisis is challenging the design of many power markets globally. Underinvestment in conventional energy infrastructure, the post-COVID-19 economic rebound earlier this year, the war in Ukraine and Russia's interruption of gas supplies to Europe, and important climatic events (such as droughts in Europe and mainland China) are creating two urgent and interrelated crises for policymakers to confront:

As a result, policymakers are hastily passing a myriad of measures that alter power market designs, either through short-term "patches" or more structural changes, and across both the wholesale and retail segments. This situation, which will have long-term ramifications, is summarized in the figure below. 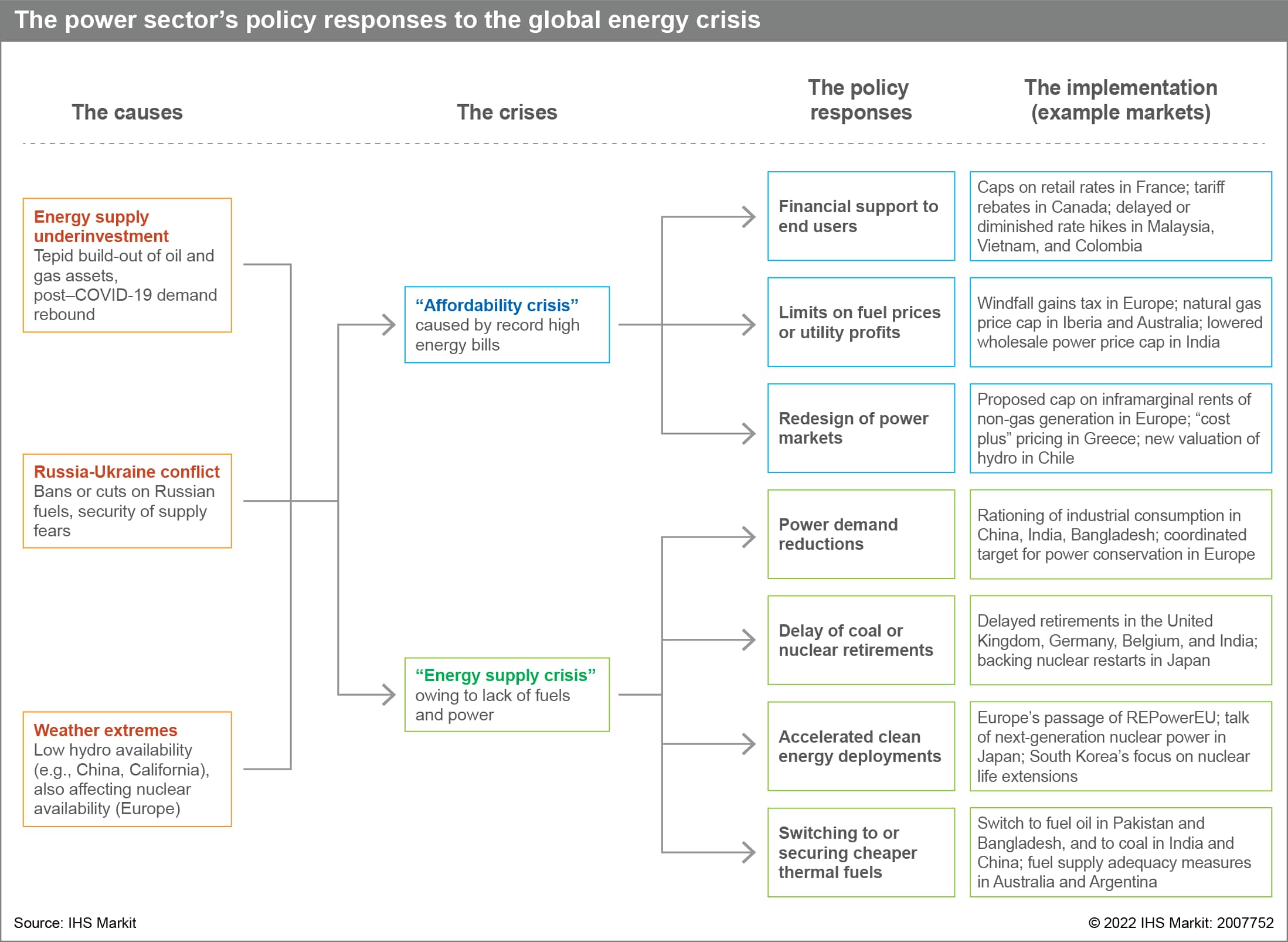 Policy responses vary across power markets, but converge according to fuel import dependency, the level of market liberalization, and demand growth rates.

New policies addressing the affordability crisis have been common in liberalized markets, such as Europe, Canada, or Australia, which, for example, capped fuel costs or end-user electricity tariffs. This fact makes sense since, in simplistic terms, retail tariffs in liberalized markets typically reflect (at least partially) the marginal cost of generation, while in closed markets, the tariffs are linked to the average cost of generation or are otherwise heavily subsidized. Developing nations also passed affordability measures: Colombia, Thailand, and Indonesia recently diminished or slowed some power tariff hikes driven by inflation, and mainland China has long controlled the cost of fuels for power generation.

Meanwhile, policies addressing the energy supply crisis are concentrated in fuel-poor or rapidly growing markets. Europe is a prime example of the former, with its massive REPowerEU policy initiative for LNG and clean energies, or its delayed coal retirements, but so are Japan and South Korea, which are revisiting their nuclear energy programs. In markets with surging demand, where often costs are of essence, power rationing (e.g., mainland China, India, Bangladesh), delayed thermal retirements (e.g., India), or switching to cheaper albeit dirtier thermal fuels (e.g., Pakistan) are common measures.

In liberalized markets, policymakers are intervening even though price signals are properly reflecting fundamental realities; rather those signals are socially and politically unbearable.

The recent price surges in competitive power markets—for example, German wholesale power prices skyrocketed to over $1,100/MWh in August 2022—have led some commentators to say that the markets are distorted or fraudulent. However, these markets were designed to let price signals allocate resources on both the supply and demand sides. As such, the markets are today largely doing what they are supposed to do.

However, in many countries, the prices generated in competitive markets are proving socially and politically unmanageable. As a result, governments are intervening in functioning liberalized markets to either "patch things" temporarily or apply more structural changes. The best-known example is Europe's limit on the market revenues of inframarginal generators. Other markets also saw reforms in response to power price hikes: Australia passed measures to ensure fuel security, Singapore protected businesses through short-term fixed-price contracts, and Japan weighed adjusting its scheme for "last-resort" power supply contracts. The United States, on the other hand, being largely energy sufficient, has experienced only a modest increase in energy costs and has not seen the same short-term policy reaction in its power sector.

The power sector policies that address the immediate energy crisis will affect the long-term path toward decarbonization.

Today's energy emergency has for backdrop the world's ambition to decarbonize within the next 25-30 years. The policies passed today are often opportunistic (e.g., mainland China and India procuring cheap gas from Russia) or for outright survival (Europe doubling down on clean energy), which in the years to come may require more restructuring of the world's power markets. Market designs will evolve as geopolitics change how governments balance energy security, affordability, and the energy transition. This will bring policy risks for players in this space.

Learn more about our research into global power and renewable energy.

Etienne Gabel, a senior director at S&P Global Commodity Insights with the Global Power and Renewables team, specializes in the analysis of market and regulatory developments in power sectors worldwide.