The enduring effects of shale on petrochemical manufacturing

Only 10 to 15 years ago, the sun appeared to be setting on the US petrochemical industry. Across the landscape, manufacturers were shutting down or eliminating significant chemical production capacity. Thanks to economically disadvantaged feedstock resources - and a migration of entire manufacturing industries to China that severely constrained domestic demand - the US found it increasingly difficult to fill out domestic assets. One by one, facilities began to close.

Fast forward a decade and a convergence of technological and geopolitical forces unexpectedly changed what seemed to be a foregone conclusion. Between 2009 and 2014, crude oil prices rose dramatically, trading close to $100 per barrel, while shale technology unlocked previously known but economically infeasible hydrocarbon resources at extremely competitive prices.

The resultant growing differential between the price of natural gas/natural gas liquids and oil began to attract petrochemical investment back to the North American market. An energy revolution was under way.Today the energy feedstock resources being produced in the US continue to feed a petrochemical renaissance in North America. With feedstock advantages in the hundreds of dollars per ton over other global regions, US shale resources are encouraging massive capitalinvestment in the energy and petrochemical value chain.These assets are creating impacts in the midstream as well as downstream markets. New investments are simultaneously developing in the associated chemicals export and logistics infrastructure.

Numerous integrated companies and major petrochemical producers - including many foreign players from Europe, the Middle East and Asia Pacific - are taking notice of these market dynamics. Leading domestic companies like Dow, ExxonMobil, and ChevronPhillips will join firms such as SABIC, Total, and Borealis to capitalize on more than 100 million tons of new petrochemical capacity from shale. These are great companies with a keen focus on environmental stewardship and employee safety. From this new capacity, manufacturers will develop products such as ammonia and methanol as well as natural gas liquid derivatives like ethylene, propylene, and their derivatives. 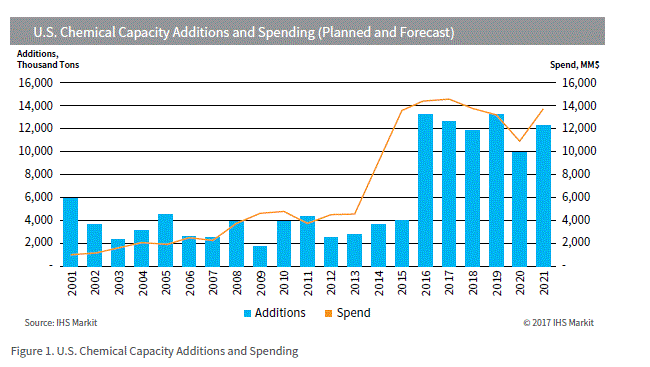 Based on our research, IHS Markit expects these investments to yield additional positive economic outcomes in the following areas:

Surpluses Stimulate the Market at Home and Abroad

Because the increase in US production is likely to exceed domestic demand, surplus product will flow to export markets. (See Figure 2.) IHS Markit anticipates that this additional production will grow our trade surplus by more than $20 billion. Much of this excess will ship to countries such as Mexico and China, which are key targets of the US government's goal to address overall trade imbalances and help reduce the overall US trade deficit. 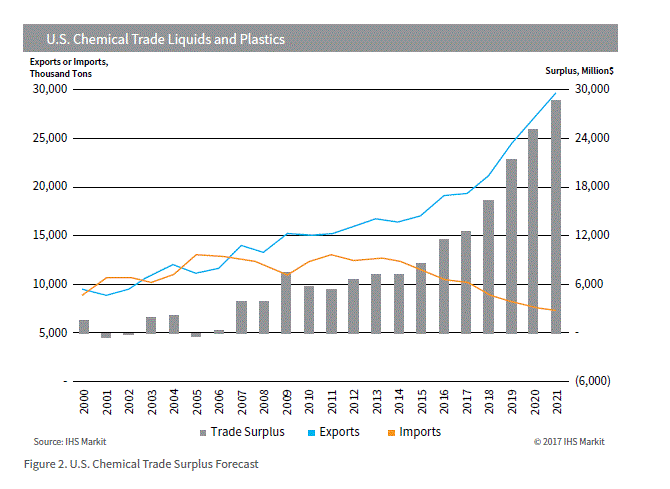 Surpluses will create additional value for US ports, including supply chain partners such as shippers and logistics companies. Furthermore, this projection of surplus excludes any trade effects from direct exports of natural gas liquid hydrocarbons such as ethane, propane, and butane as well as oil, oil products, and natural gas.

For example, some of the shale gas-derived ethane will be directly shipped to countries such as India, Scotland, and other countries in Europe and Latin America. Facing longstanding feedstock disadvantages and a declining feedstock base, manufacturers in these locations welcome these exports to revitalize their petrochemical facilities and create the same economic benefits the US is realizing.

Multinational chemicals producer INEOS Group Holdings, which has key operations in Europe,is now making ethane shipments directly from the Enterprise Hydrocarbons Terminal on the Houston Ship Channel to the Grangemouth manufacturing complex in Scotland. Previously, Grangemouth had been targeted for closure due to its inability to compete with feedstockadvantaged
producers in the Middle East.