Syngenta warns of food crisis in shadow of Russia/Ukraine conflict

Syngenta expects agricultural output in Ukraine to fall by a third this year as a result of the ongoing invasion by Russia. "We hope to be able to save around two-thirds of what would normally be possible," the company says. Production estimates from S&P Global's Food and Agri Commodity Economics show a sharp decline in the production of the major crops in the country this year, with wheat production falling 33.3%, maize (-52.3%), sunflowers (-42.9%), and oilseed rape (-25.4%).

Chief executive officer Erik Fyrwald says that the conflict could lead to food shortages for vulnerable populations, even years after the fighting has ended. "Fortunately, economic sanctions imposed on the leadership of Russia by the EU, the US and other nations have not been applied to agricultural products or essential medicines," he points out. Mr Fyrwald hopes that the conflict does not intensify to such an extent that food security ceases to be a consideration. "Access to food is a basic human right, and Syngenta Group will continue to support growers in Ukraine, and also in Russia," he adds. 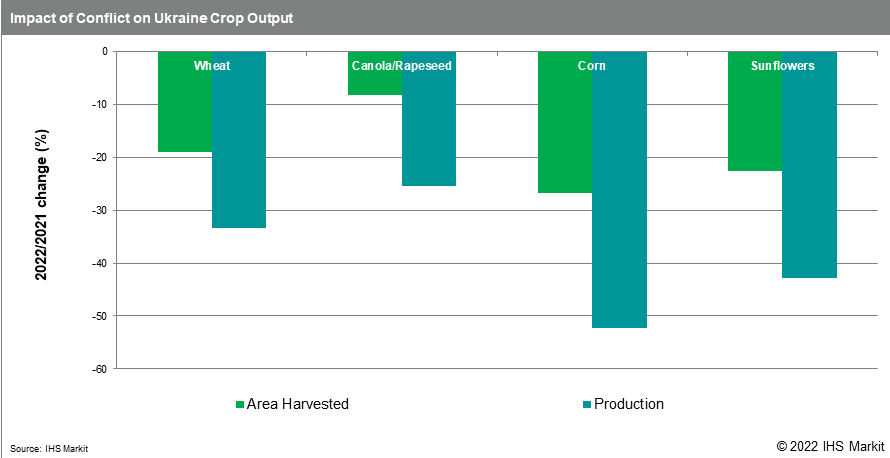 Mr Fyrwald says that the current growing season has already been challenged by unprecedented flooding, drought and high levels of pest destruction. Droughts in Europe and South America have reduced crop yields in key growing regions, especially Argentina, the largest soybean processor in the world. In the US, some 55% of the spring wheat crop was rated "poor" to "very poor" in 2021, due to drought conditions, the worst outcome since 1988. Furthermore, this year's winter wheat crop may be the worst in China's history, due to heavy rainfall during the planting season, Mr Fyrwald points out.

The CEO cites UN secretary general António Manuel de Oliveira Guterres, who mentioned that 45 nations imported at least a third of their wheat from Ukraine or Russia. "Despite the destructive events of the past month, the farmers of these two countries must continue their work," Mr. Fyrwald insists.

Insights and Data on the Crop Science Market

Find out how we can help
Subscribe to RSS Feed