Bright future ahead for specialty chemicals after 2016 hiccup

The global market for specialty chemicals totaled $556 billion in 2016, driven by the strong demand for personal electronics and the increasing buying power of Chinese consumers. Despite the strong performance of these consumer markets, other economic headwinds joined forces to stall market growth: a slowing Chinese economy, the recession in several South American countries, the weakness in the oil and gas industries, and the spotty performance of the construction markets.Consequently, the global market value for specialties fell slightly (-0.2%) from the 2015 level.

Electronic chemicals, industrial and institutional cleaners, and specialty polymers, each accounted for 7% to 8% of the total global market, with a market value of $40 billion to $45 billion in 2016. Surfactants, construction chemicals, flavors and fragrances, catalysts, specialty coatings, and water-soluble polymers accounted for roughly $30 billion each in market value. The food additives market was about $25 billion. 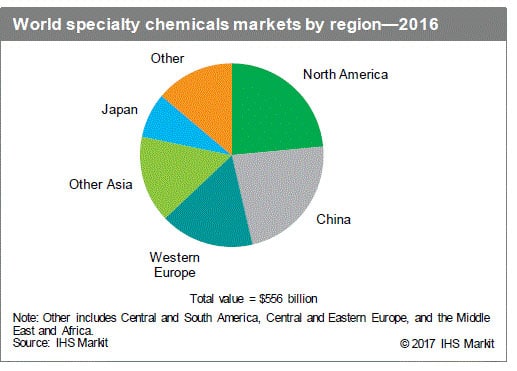 While consumer-driven categories such as electronics chemicals had robust demand growth, one casualty of the market has been oilfield chemicals. The amount of specialty chemicals consumed by the oil and gas industry was about 4% in 2016, which was down from 6% during 2013-15, due to the continued weakness in crude oil prices. 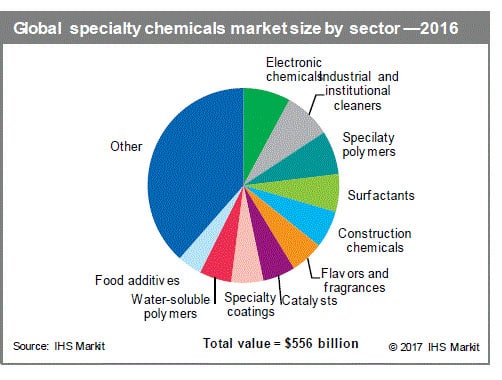 Despite the market stalling in 2016, the future remains bright for the industry. In the next five years,the global specialty chemicals market will grow at 3-3.5% annually, paralleling the growth in the economy.

The combined consumption in North America, Western Europe, and Japan will grow more slowly at about 2% per year. This is not a reflection of sluggish or shrinking markets but rather because the specialty chemicals industry is fully established in these regions. In terms of per capita consumption of specialty chemicals, these areas already have the highest in the world (3-4 times the world average of $75 per capita). In contrast, there is still higher growth potential in the emerging markets because of rising consumer-driven economies and industrialization. In particular, China will have the highest consumption growth rate of all regions. China's economy is experiencing some short-term setbacks, and the forecast of consumption for specialty chemicals has been downgraded slightly from the historical 8-9% per year to 6-7% per year. Nevertheless, the country will continue to power the growth of global specialty chemicals in the foreseeable future. China's market is getting a boost from a government effort to move away from heavy industries to more advanced, differentiated sectors. The government policy is called "Made in China 2025" and its mplementation is expected to facilitate industry restructuring that will ease the shift from commodity to specialty chemicals. We at IHS Markit expect China's share of the specialty chemicals market to surpass that of North America by 2021.

The other regions of the Middle East and Africa, South and Central America, and Eastern Europe will all be growing faster than the developed regions, albeit from very small bases.

In terms of category growth, several specialty chemicals such as nutraceuticals, electronic chemicals, flavors and fragrances, and specialty coatings will grow faster than the world average due to the positive outlook for the corresponding end uses. 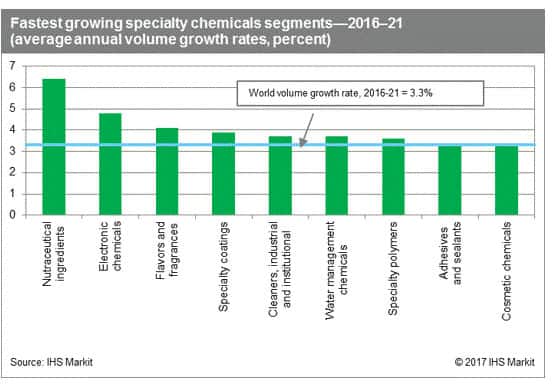 Specialty chemicals require more formulation and customization than commodity chemicals such as ethylene or polyethylene, and as a result, they often provide a competitive market niche and better margins for producers, so they are an important part of the chemical producer's portfolio. As we have seen over time, companies are increasingly shifting their portfolio toward the specialized chemicals in order to hedge their position in the business. BASF is the largest specialty chemical company in the world, with an estimated $43 billion in revenues generated from specialties. It is present in all major market segments and is among the leaders in catalysts, construction chemicals, and plastics additives. BASF further competes among the top three players in the biocides, food additives, nutraceuticals, and cosmetic chemicals market segments.

Dow Chemical and DuPont have occupied the second and third positions globally in specialty chemicals for many years. However, with the merger of those two companies now complete, the future rankings will change. DowDuPont will subsequently split into three independent, publicly traded companies within 18 to 24 months. One of these companies will specialize in specialty chemicals, the others in agriculture and in material science. Given the extent of both Dow's and DuPont's current participation in the industry, there is no doubt that the new specialty chemical company will remain in the top 10 list.

The finalization of the DowDuPont merger is but one of a number of mergers and acquisitions in the specialty chemical industry at present, but it is not likely to be the last, since several companies are divesting of less productive assets and seeking to strengthen core assets where they have a competitive advantage. Acquisitions also give global companies a means to enter a regional market where they seek to grow.