Solar PV module manufacturing base continues to consolidate in 2020

In 2019, global PV module shipments grew by 30% and reached 138 GW as shown in IHS Markit's recently developed Global PV Shipment Dashboard included in the Solar PV Module service. The share of the top 20 players continued to increase, reaching 71% of total shipments and continuing the trend of consolidation throughout the supply chain seen throughout the last decade. This indicates that the total volume shipped by the top 20 players has increased more than nine times since 2010.

Over the past decade, the top player rankings (by shipment volume) have changed significantly with Chinese module manufacturers becoming dominant among the top ten suppliers and with Japanese and North American companies moving away from the top positions. Despite dominance by Chinese manufacturers, there has also been significant shifts within the top companies. Trina Solar is the only company that has remained in the top five throughout the last decade, with JinkoSolar, JA Solar, LONGi, and Canadian Solar holding the rest of the top positions in 2019.

There is an ongoing debate about the likely emergence of new political and economic measures in the post-COVID-19 world aimed at encouraging the localization of manufacturing, that could trigger the growth of capacity expansions outside of mainland China to reduce the current over-reliance on this region. Although it is too early to tell if some additional trade barriers, protectionist measures, or local incentives might increase solar manufacturing attractiveness outside of mainland China in regions like Europe, IHS Markit analysis underscores that based on current capacity and announcements, mainland China will continue consolidating its dominance across the entire module supply chain in 2020 concentrating 70% of total module manufacturing capacity and even higher for upstream nodes (i.e. polysilicon, wafers). Southeast Asia and India are the only regions with a sizeable projection of module capacity expansion, but they still relatively modest in comparison to China mainland figures. 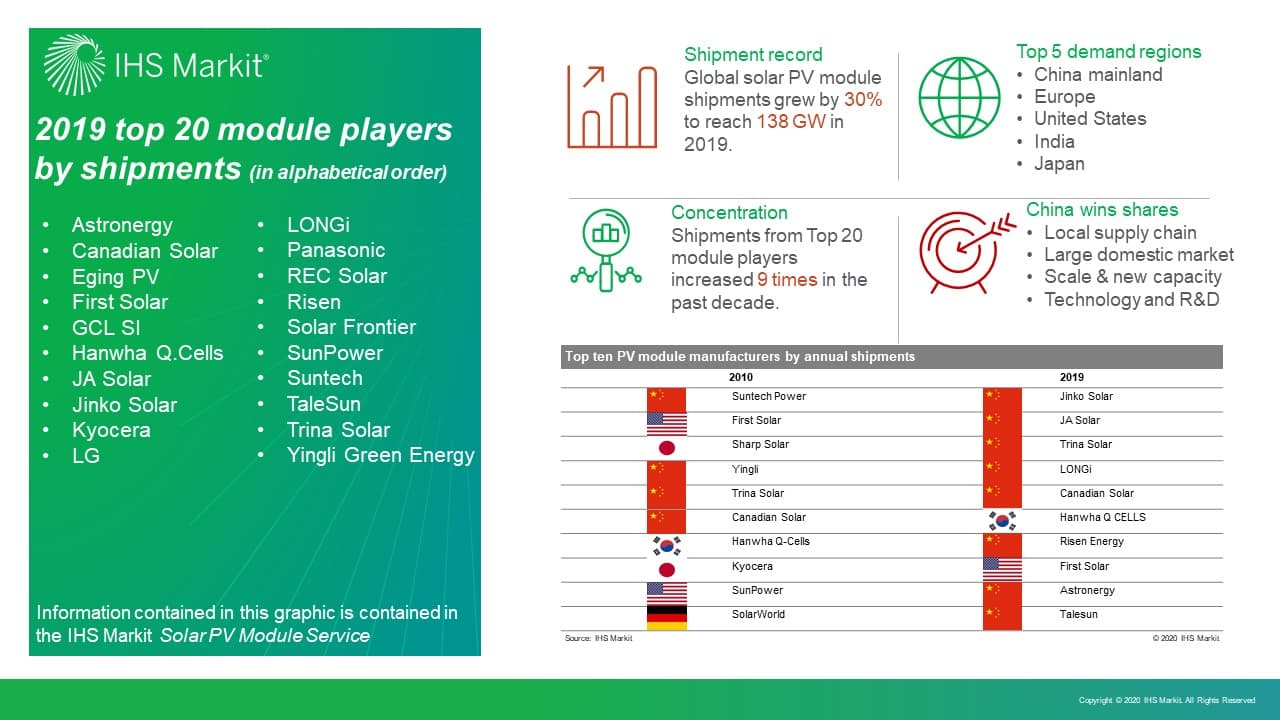 The solar manufacturing industry had been preparing for a record year, with major capacity expansions announced to be ramped up in the second half, particularly at the wafer and cell levels.

The updated 2020 solar installation forecast, reflecting the impact of the COVID-19 outbreak, has instantly positioned the module supply chain in a overcapacity situation. After a decade of solar PV installations growing at double-digit rates each year, IHS Markit's new outlook means that solar will decline for the first time this year (-12% y/y). Installations are forecast to return to 2018 levels, but global module manufacturing capacity will be 37% higher than it was that year.

The three major immediate consequences of oversupply in the second half of the year will be (i) delay of some capacity expansion plans until 2021, (ii) idling of multicrystalline capacity due to low demand for this technology, and (iii) significant component price declines. Chinese tier-1 manufacturers will continue to account for the majority of capacity expansions in 2020, and the overcapacity will mostly affect smaller tier-2 players, higher-cost manufactures, and multicrystalline producers. Top 20 module players are expected to gain market share again this year.

2020 will be a critical year that will reshape the Solar PV module manufacturing landscape. Many trends that had already been taking place will be accelerated, with a different collection of companies and preferred technologies emerging after the pandemic has eased. After this major short-term disruption, installation growth will resume from 2021 to continue the growth trajectory that solar PV has seen in the last decade. IHS Markit projects a recovery of utilization rates in 2021 across the entire module supply chain.

Learn more about our Solar PV Module data and research.

IHS Markit experts are available for consultation on the industries and subjects they specialize in. Meetings are virtual and can be tailored to focus on your areas of inquiry. Book in a consultation with Edurne Zoco.

Edurne Zoco is an Executive Director of Clean Technology and Renewables at IHS Markit.