Rare earth elements (REEs) are a group of 17 chemical elements, all metals, that tend to be found together in geologic deposits. Rare earth metals and the alloys that contain them are used in a variety of high-tech applications, such as wind turbines, electric vehicles, rechargeable batteries, radar systems, and laser crystals. For this reason, they are called "vitamins of modern industry."

The importance of these elements for key industries and the dominance of China in their global supply puts REEs at the center of power struggles. In 2010, China blocked exports of rare earths to Japan during a dispute on East China Sea islands. In early 2018, the US introduced import taxes on REEs and rare earth products from China. Tariffs were lifted shortly after, when the US realized that products could not be readily sourced domestically or from other non-Chinese sources. In mid-2019, China issued trade tariffs on REEs and Chinese government representatives made comments that could be interpreted as threats to cut REE supplies to US military buyers. In response, the US government indicated a desire to become independent of Chinese REE supplies. The surprising offer from the US government to buy Greenland also seems to be motivated at least in part by a potential rare earth mineral project.

The group of REEs includes the lanthanides, from lanthanum to lutetium, plus yttrium and scandium. The major minerals containing REEs are bastnaesite, monazite, and xenotime, which contain 60% to 75% rare earth oxide (REO) equivalent by weight. The REEs are relatively abundant in the earth's crust. For example, cerium, one of the light rare earth elements, is more abundant than copper.

REEs occur as a series of elements within the minerals, making separation difficult and costly. Generally, the REO is isolated in the separation process. The REO can be used directly or further processed into other rare element earth chemicals and products.

In 2018, 88% of the world's REEs were processed and separated in China. The only other major operational separation plant is in Malaysia, where Lynas Corporation processes ore mined at the Mount Weld deposit in Western Australia. About 62% of the rare earth mineral concentrates were sourced in China in 2018, down from 79% in 2015. This drop in China's REE concentrate production was caused by the ramping up of production at the Mount Weld mine and at the Mountain Pass, California mine, as well as imports of ore from Myanmar. Imports of REE concentrates are therefore becoming increasingly important for Chinese processing companies.

Permanent magnets are the largest and fastest-growing sector

Neodymium iron boron (NdFeB) magnets account for about 90% of the permanent magnets produced in 2018, with samarium cobalt (SmCo) making up the remainder. In 2018, 34% of the total rare earth demand was for permanent magnets. By 2023, this total is forecast to increase to a 38% market share, a 4.9% average annual growth rate.

An estimated 90% of the total permanent magnet materials were produced in China in 2018. The largest use for permanent magnets is in synchronous motors, which are found in wind turbines as well as electric and hybrid vehicles. Other PM uses include magnetic storage. Aside from magnets, REEs are used in polishing powders for tablet and mobile phone screens, refinery and emissions catalysts, and rechargeable nickel metal hydride batteries (See Figure 1).

Permanent magnets are also widely used for defense applications. Recently, the Pentagon called for increased US domestic production of NdFeB and SmCo magnets, due to sourcing concerns. 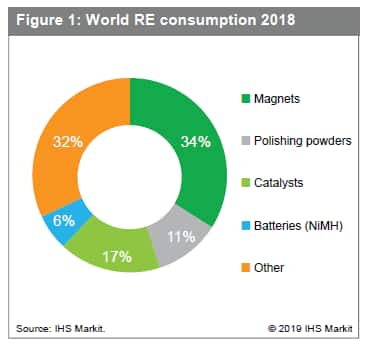 Situation in the United States

The United States has estimated reserves of around 1.4 million metric tons. Production began in 1952 at the Mountain Pass, California mine, one of the major world reserves of rare earth. In 2013, Molycorp produced over 5,000 metric tons of REO at Mountain Pass. The mine was idled in October 2015 and shortly after Molycorp filed for bankruptcy. The continued downtrend in price for REOs was blamed for the company's financial failure. In June 2017, the Mountain Pass mine was sold for $20.5 million to MP Mine Operations LLC, a US-based consortium with Leshan Shenghe Rare Earth Co of China holding a non-voting minority interest. In 2018, Mountain Pass produced an estimated 12,300 metric tons of REO in the form of a rare earth fluoride concentrate - which was exported to China. There are two other advanced projects in the US. The Bear Lodge Wyoming project from Rare Element Resources promises a 9,000 metric ton REO plant but is awaiting further investment. The other notable project is the Ucore Rare Metals project at Bokan Mountain in Alaska - a 2,500 metric ton-per-year REO separation plant that should begin production by 2023.

Over the last 15 years, the production of rare earth minerals and refined products has largely moved to China. This trend has created fears of a fundamental supply problem in the industry.

After an all-time high for REO prices in mid-2011, prices and demand slumped in 2012. The price spike in 2011 was caused by supply insecurity. The price was driven up by REE consumers stockpiling material as the Chinese authorities placed export tariffs and quotas on REEs. In 2014 and 2015, demand started to pick up slightly, but prices continued to decline for all REOs into the middle of 2017. Prices for some rare earths including neodymium, praseodymium, and yttrium increased through the end of 2018 (See Figure 2). 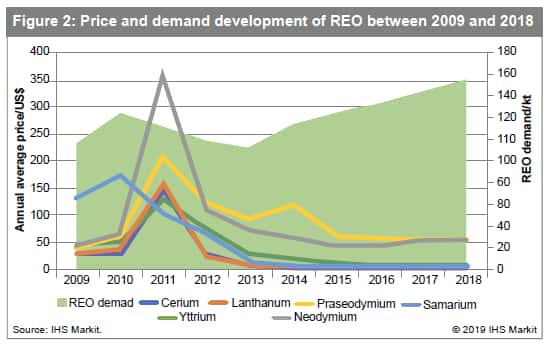 What are the long-term supply considerations for the US?

The main US government concern is the supply of REEs for defense purposes, which is less than5% of the annual US REE consumption. Finding an alternative source for rare earth products will take time and be costly for the US. China produces low-cost, good-quality REE products, although there are concerns for the environmental damage caused by the industry. When the US removed rare earth materials from the final tariff list in September 2018, it was a clear sign that the US accepts its dependency on Chinese imports. As we have seen in the past, threats to supply tend to be short-lived, and they haven't been a suitable foundation for creating an economically viable domestic rare earth mining and production industry.

Chemical Economics Handbook helps you build a successful strategy, one chemical at a time. Expand your chemical investment and formulate your long-term strategy with coverage of market dynamics from feedstock to end use chemical markets for over 300 chemical products.
Find out More
Subscribe to RSS Feed