Potential in Ultra-deepwater Sabah, Malaysia – Can it be Realized?

Exploration and development activities in deepwater Sabah, Malaysia have increased since the first oil and gas discovery, Kamunsu East 1, in the late 1990s by Shell. More than 45% of discoveries in the area are found within the Upper Miocene Cycle V reservoirs of the Baram Delta and the Northwest Sabah Province.

The Kikeh field was the first deepwater development in Malaysia which was discovered in 2003 and commenced production in 2007. Six other fields have come onstream since then with the latest, the Rotan field by PTTEP, in early 2021. A variety of production systems have been used for the producing fields in deepwater Sabah. These production systems range from spar dry tree unit (DTU) (Kikeh field), semisubmersible floating production systems (Gumusut-Kakap field), tension leg platforms (TLP) (Malikai field) and floating liquified natural gas (FLNG) (Rotan and Buluh fields). 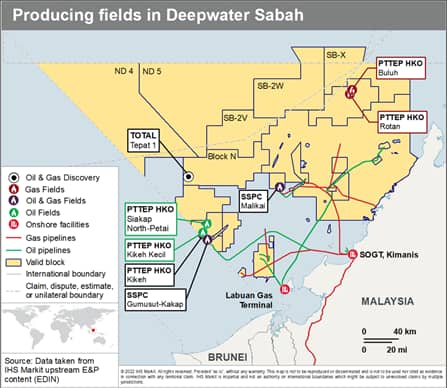 Is there potential for exploration upside in the ultra-deepwater area? What can be done to unlock further potential in the outboard?

Finding and testing new plays comes with certain risks and uncertainties but can be value accretive if proven successful. The key geological risks for the area include the maturity of the source rock and reservoir presence. The ultra-deepwater Sabah exploration began in 2012 with PETRONAS's Rajawali 1 chasing the Oligocene - Miocene carbonate and Oligocene clastics. Only five wildcats have been drilled in the ultra-deepwater to date.

Between 2016 and 2019, over 47,000 sq km of high-resolution multi-client 3D seismic data were acquired in Sabah, covering the ultra-deepwater and frontier blocks providing new exploration opportunities to unlock new plays.

In 2017, TotalEnergies's Tepat 1 oil and gas discovery was a frontier success and play opener in the Northwest Sabah Trough. The well tested the carbonate buildup equivalent to the Oligocene Nido carbonate play and encountered oil and gas. According to sources, the well encountered a large gas column with oil rim, but details on its reservoir properties were kept under wraps. Several prospects of a similar play were identified in the adjacent blocks, SB-2W and SB-X. It will be interesting to see whether these prospects are drilled in the future and whether the un-tested distal toe thrust, and the deeper fault block plays can be play openers in the area.

Can a commercial development or hub work in this ultra-deepwater area?

Given the remoteness of the Tepat discovery from existing infrastructure, the discovery could potentially be developed as subsea wells tied-back to a Floating production storage and offloading (FPSO) vessel or a semisubmersible production platform. Alternatively, a production platform based on a spar design could allow for dry tree development which would provide for more cost effective well interventions with lower workover and maintenance costs. Produced crude and condensates would be exported directly from the floating structures or via a floating storage and offloading (FSO) vessel.

A gas-focused development would likely revolve around a subsea tie-back to a floating liquefied natural gas (FLNG) vessel. A gas pipeline to shore or to existing facilities is unlikely given the limited domestic market and the lack of monetization options.

What could drive more investment in this area?

New exploration acreage would be a requirement which we've seen in the past year. SB-2W and SB-X were awarded to Shell and its partner Petronas Carigali in March 2022. These blocks were offered in the Malaysia Bidding Round 2021.

Further key wells to test the plays along with prospects with big enough resources are also critical. The recently spudded Tepat 2 will appraise the northwest part of the Tepat structure. Additional discovered volumes, along with well tests (if conducted), will define how the field could be developed most efficiently.

Petronas Carigali has a wildcat planned for late Q4 2022, after the completion of Tepat 2. Shell could be planning to drill their commitment wells between 2023 and 2024, subject to the maturity of the prospect evaluation and rig availability.

Newly discovered resources are certainly required to open this area for development. On the development aspect, cost challenges exist given the lack of existing nearby infrastructure along with the ultra-deepwater (approximately 2,800-2,900 m). But with the current market, the ability to develop any discovered gas, particularly for LNG export, would be highly desirable. Small scale FLNG has been proven to work and is an option.