Polyolefins Markets in the Americas are at a New Extreme

The recent events in the Americas polyolefin markets have been history in the making. Looking back six months ago, no one would have predicted the impact of the 2020 hurricane season, COVID-19 impacts, and production issues plaguing the polyethylene (PE) and polypropylene (PP) markets in the Americas. Likewise, no one would have expected that the unique separation of trade in the Americas from the Asian markets would result from what this author calls the "Amazon Effect." Prices are at historic highs as PE prices have increased 24 cents per pound (cpp) over the last 7 months, with another 12 cpp nominated for January and February. All of these events are contrary to the forecasts from just one year ago, when new plant start-ups both in the domestic and international markets were supposed to bring a glut of resin into the market, expand US exports, and pressure prices downward in the domestic markets. Given these events, what does this set of extreme circumstances suggest for the next six months?

First, we will look at the supply and demand trends in the US/Canadian markets for 2020. Figure 1 summarizes the PE domestic sales and exports for Canada and the USA (CANUSA) from January through November 2020 for all three PE grades (high-density PE [HDPE], linear low-density PE [LLDPE], and low-density PE [LDPE]) collectively. The data shows that overall domestic sales during the year actually declined slightly as November total domestic sales were 1,194 metric tons versus 1,235 metric tons in January 2020, about a 3% decline from the pre-pandemic level of January 2020. Exports declined on average by 12% from the January 2020 to November 2020 levels, suggesting that the overall exports for PE in the US and Canada did not increase in 2020. Thus, CANUSA demand did not increase from January-November 2020, and thus price increases in 2020 were not due to a major increase in demand throughout 2020. 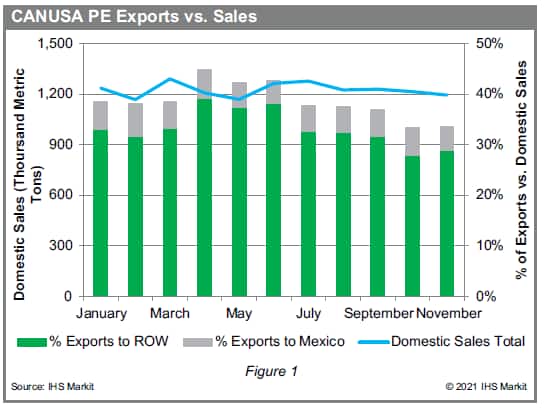 Then next variable to consider is production. At the beginning of 2020, we were forecasting several new plant start-ups in the US, including two new LDPE units (Formosa and Sasol) and one Hyperzone HDPE plant (Equistar) that would increase domestic production by 1.3 million metric tons (5% increase). Figure 2 shows that 2020 production was actually flat in January 2020 (2,140 kilotons) versus November 2020 (2,147 kilotons). Curiously, however, the impact of plant operations during the peak of the COVID-19 pandemic (April through August) saw declines in daily inventory levels as determined by monthly production versus monthly domestic sales demand. It was only in October that the industry showed any significant increase in inventory levels following the economic shutdown that occurred in April and May.

In August and September, the US Gulf Coast was hit with three major hurricanes and several tropical storms that forced plants in the Louisiana and Texas coastal areas to shut down, some for an extended period of time (months, not days). September production was 13% lower than January production, resulting in a cumulative total of 4.5 days of reduced inventory for the period April through September 2020. This unusual hurricane season greatly exacerbated the availability of PE resins in certain key markets such as blow-molded bottles, shrink film for packaging, and food container applications. Only in October did the inventory levels start in increase, with the January through November inventory movement up 3.5 days in total. However, at the time of this report, several producers are still struggling to rebuild inventories to normal levels and continue to operate under force majeure conditions. The net impact has been very little spot resin being offered into the domestic and export markets as inventory levels did not increase significantly. 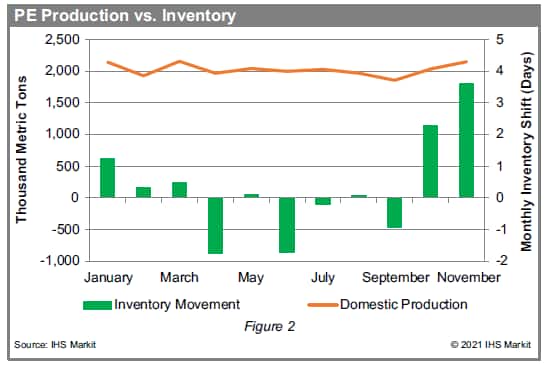 Production levels also did not increase as expected for a variety of reasons, including natural events (COVID-19 and hurricanes) and unplanned events (fires, explosions, extended plant turnarounds, ethylene contract disputes, etc.). On balance, however, the data as shown would suggest that the market should be returning to a more normal supply/demand condition in the coming months as production is showing increases back to January 2020 levels.

Therefore, on average, no major changes in production or inventory levels developed from January through November 2020 that might support major price increases in the domestic market. 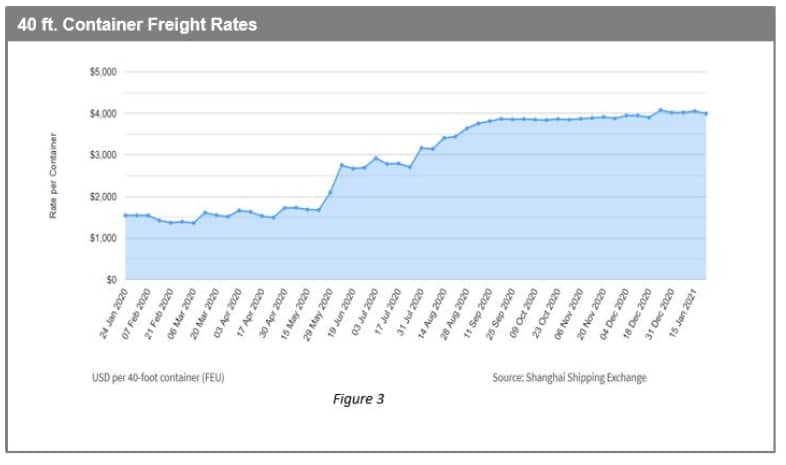 Certainly, there was a concern about increased fuel charges with the implementation of the International Maritime Organization's new emissions rule (IMO 2020) in January 2020 (lower sulfur specifications causing an increase in fuel charges). However, nothing like the increase shown in Figure 3 was expected. In the simplest of terms, the higher freight rates are due to a lack of available containers and ships moving product from mainland China to the Americas (particularly, the US). The shortage is due to the author's aforementioned "Amazon Effect."

The "Amazon Effect" is related to the COVID-19 pandemic as consumer purchases of the top five categories of goods and products from mainland China shipped to the US increased, on average, 37% in 2020 versus 2019. Figure 4 shows a more detailed listing of the number of units shipped in 2020 and the relative percentage increase for the top five categories. These items included electronics and electrical machinery; toys, games, and sporting equipment; optical, photography, and medical imaging equipment; plastic articles; and washing machines, dishwashers, dryers, etc. The pandemic has accelerated the growth of Amazon's distribution footprint as more consumers buy everything from groceries to furniture online. The company's commitment to growing its real estate presence underscores its confidence that those consumer buying habits will stick around post-pandemic and address demand for deliveries that happen within hours of an order being placed. The company said last summer that it had at least 70 logistical facilities in development across the United States and that it expected to boost its warehouse capacity by 50% before the end of 2020. By comparison, Amazon grew its distribution network by 15% in 2019. 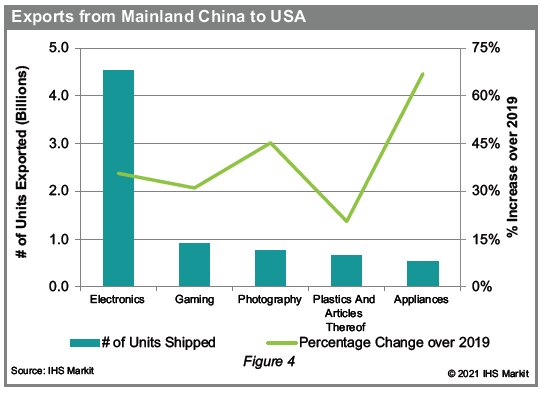 The impact of this huge increase in exported goods to the US created a shortage of available containers for shipping commodity products such as PP or PE to the Americas. Commodity products must now compete with higher valued finished-goods products to secure a container for shipment. In essence, resin shipments are competing against Walmart and Amazon for containers and transportation space on ships.

This container shortage situation has resulted in competitive bidding for containers, with reported prices above $1,000 per container. Freight shipping companies are also charging $1,000-plus to guarantee slots on the ships, so prices to ship resin from mainland China to the US West Coast are reported in the range of $6,000-8,000 per 40-foot container. Additionally, port congestion in major ports of entry (Shanghai and Long Beach, California, for example) has extended the delivery times to 4-6 weeks instead of a more normal 3-4 week delivery time. Current freight rates for westbound traffic from mainland China to the Americas are at some of the highest rates in history, with only the 2007/08 period approaching the current scenarios.

One final variable to consider is that very little resin is shipped from mainland China to the US, so why would freight rates from mainland China matter? In terms of supply and demand, the impact is indeed limited. However, in terms of pricing, the impact has been dramatic. Latin American (LATAM) countries depend on product from Asia (especially mainland China) and the high freight rates have made imported resin from the regions very expensive, with significant risks associated with long delivery times. Colombia, for example, has reported freight rates as high as $15,000 per container, which equates to a premium of 27 cpp just because of shipping costs. The end result is that the LATAM countries need imported resin and their supply from Asia is highly constrained, which has resulted in an increase in demand for product from the US.

The complexities described above are not unique to polyethylene. Similar problems exist for the polypropylene markets with similar issues of unplanned shutdowns, high mainland China/Asia freight rates, and strong market demand. Polypropylene prices have also been impacted by higher feedstock costs as propylene monomer production has been impacted by lower refinery operational rates and PDH plant shutdowns. The higher feedstock costs are likely to continue until fuel demand (gasoline, diesel, and aviation fuels) returns to a level similar to the pre-pandemic 2019 period.

In summary, we are faced with a shortage of resin in the domestic markets due to supply disruptions that continue even today. The events associated with the shutdown of the Braskem Idesa plant because of contract disputes with PEMEX and the Mexican government dramatically disrupted supply in Mexico, which has added to the shortage of resin in Mexico and increased demand for US product. Asia (particularly mainland China) is not a desirable option to source resin given the high freight rates, thus US producers are able to increase prices without loss of market share. This tight market is expected to continue through the first quarter of 2021, and only when inventory levels return to industry norms should we see some relief, and hopefully return to a more traditional market that will include spot resin sales. In 2021, some additional PE capacity will become available with the start-up of the two LDPE plants (ongoing) and the completed start-up of the Hyperzone plant, which should provide some relief to the tight market; nevertheless, the tight market is expected to continue through the second quarter.

As for the mainland China freight rates, that will continue to depend on the mainland China regional economy, the long-term change in consumer buying habits (the Amazon Effect), and the impact of the pandemic on economic regions around the world. As long as the freight rates remain at these historically high levels, domestic producers in the US will see little downside pressure to reduce prices under tight resin supply conditions. For the moment, we are faced with a historically unknown relationship of a split market between Asia/mainland China and the Americas, as the two regions appear to operate independently in the polyolefin markets. In addition, it appears the Amazon Effect may be a permanent shift in consumer buying habits.

We also offer a long-term outlook on supply and demand globally and on a country level, along with a live capacity database and trade flow analysis on a country-to-country basis in our World Analysis (WA) service. In addition, the WA now also provides 10-year price and margin quarterly updates for North America, West Europe, and Asia.