The vast and—in many areas, remote—Southwest African Coastal Basin has drawn global exploration companies to its offshore waters for decades. More than 50 new-field wildcats (NFWs) have been drilled in almost half a century, with some wells offering tantalizing glimpses of a distal oil-prone system underpinning numerous prospects. The absence until this year of a clearly commercial discovery over this significant elapsed time, however, had acted to dampen the enthusiasm of many players.

Now in 2022 the potential of the basin has been demonstrated; back-to-back material light oil and gas discoveries in the Orange Subbasin have not only transformed the economic and energy outlook for Namibia, but also justified the persistent and diligent approach of the exploration companies involved in these discoveries.

Play opening discoveries of scale in the ultra-deepwater

The dynamic between the Palaeo Orange River delta system and the Outer High is key to understanding the newly discovered play fairways, particularly where structural Transfer Zones provide sediment corridors into the ultra-deepwater terrain.

TotalEnergies's Venus-1X, which has the potential to be a very large offshore oil find, has unlocked an Early Cretaceous deep marine basin floor fan play outboard of the Outer High; while Shell's Graff-1 has proven potential for Late Cretaceous clastic reservoir charge in the drift section, where the Outer High likely acted as a backstop for sediment influx.

Early indications are that discovered volumes in both fields will be large enough to support stand-alone developments. Successful appraisal campaigns likely will result in both European supermajors pursuing fast-track development plans.

Prioritized development of both the Graff and Venus discoveries could place Namibia as Africa's 5th largest oil producer by 2030; and significant exploration upside exists. 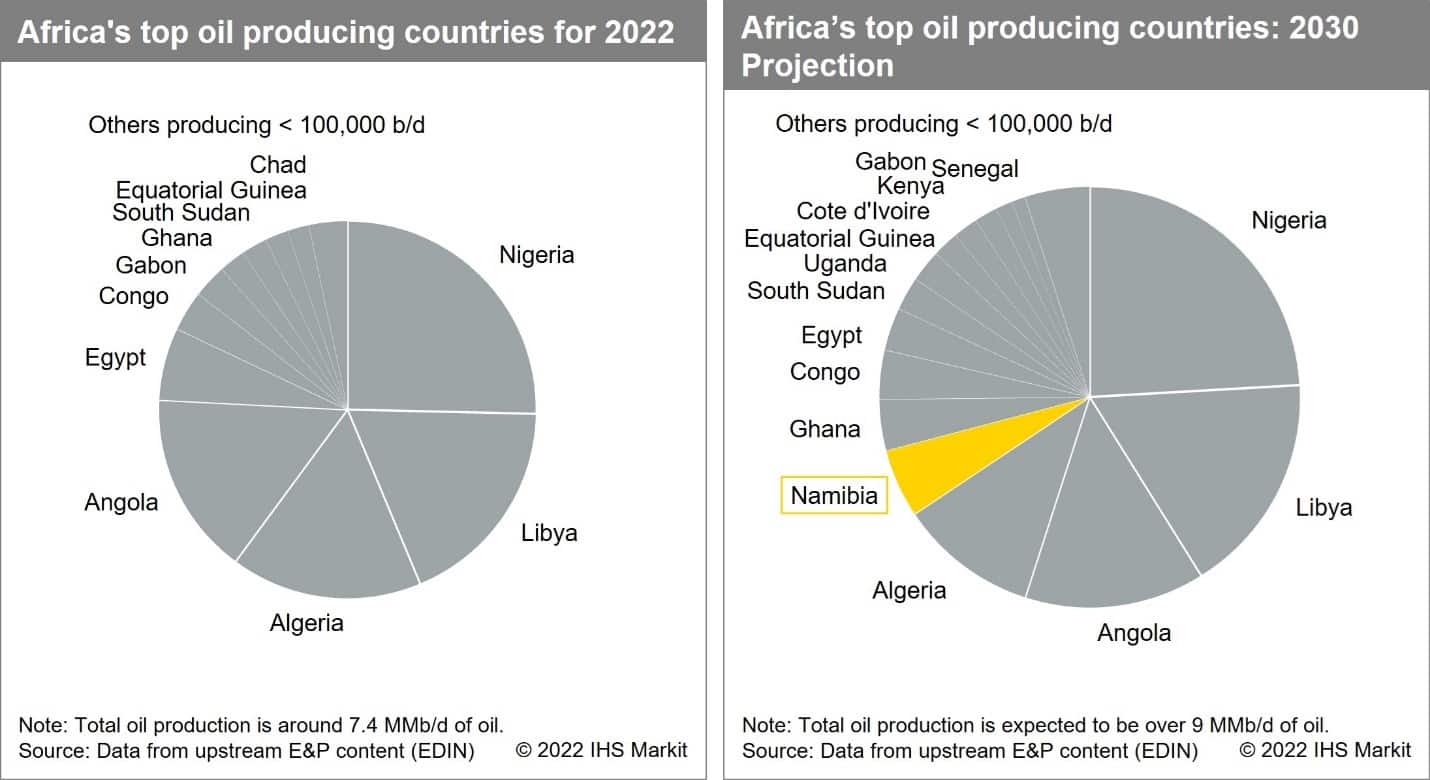 Based on the limited information obtained so far, S&P Global provisionally expects production from Namibia to start by 2027, with the potential for collective liquids output to reach around 500,000 bbl/d by 2030; and material gas production is likely to supplement this. Appraisal drilling will further guide field development plans.

Namibia's political stability and competitive upstream fiscal terms which allow for lower project break-even prices, in addition to an optimal landscape for synergistic green energy solutions and low-carbon upstream developments, make it one of the more attractive energy investment destinations in sub-Saharan Africa and along the Atlantic margin.

Electricity generation capability in both Namibia and South Africa has been challenged in recent times by aging thermal power infrastructure and hydropower being vulnerable to severe droughts. However, both countries are recording a boost in private sector investment into renewable energy projects which will create a more diverse, reliable, and sustainable energy supply for the region.

The region is particularly suitable for low-cost green hydrogen production owing to its large solar and wind resources, proximity to seawater along extended coastline sections, and open sparsely populated land areas with limited residential power needs. An ambitious $9.4 billion green hydrogen project has been approved by the Namibian government in the south of the country, with another major green hydrogen feasibility study underway just south of the border in South Africa. Generation of excess renewable electricity and hydrogen presents opportunities to decarbonize upstream and midstream operations, as well as supply regional heavy industry and transport customers. 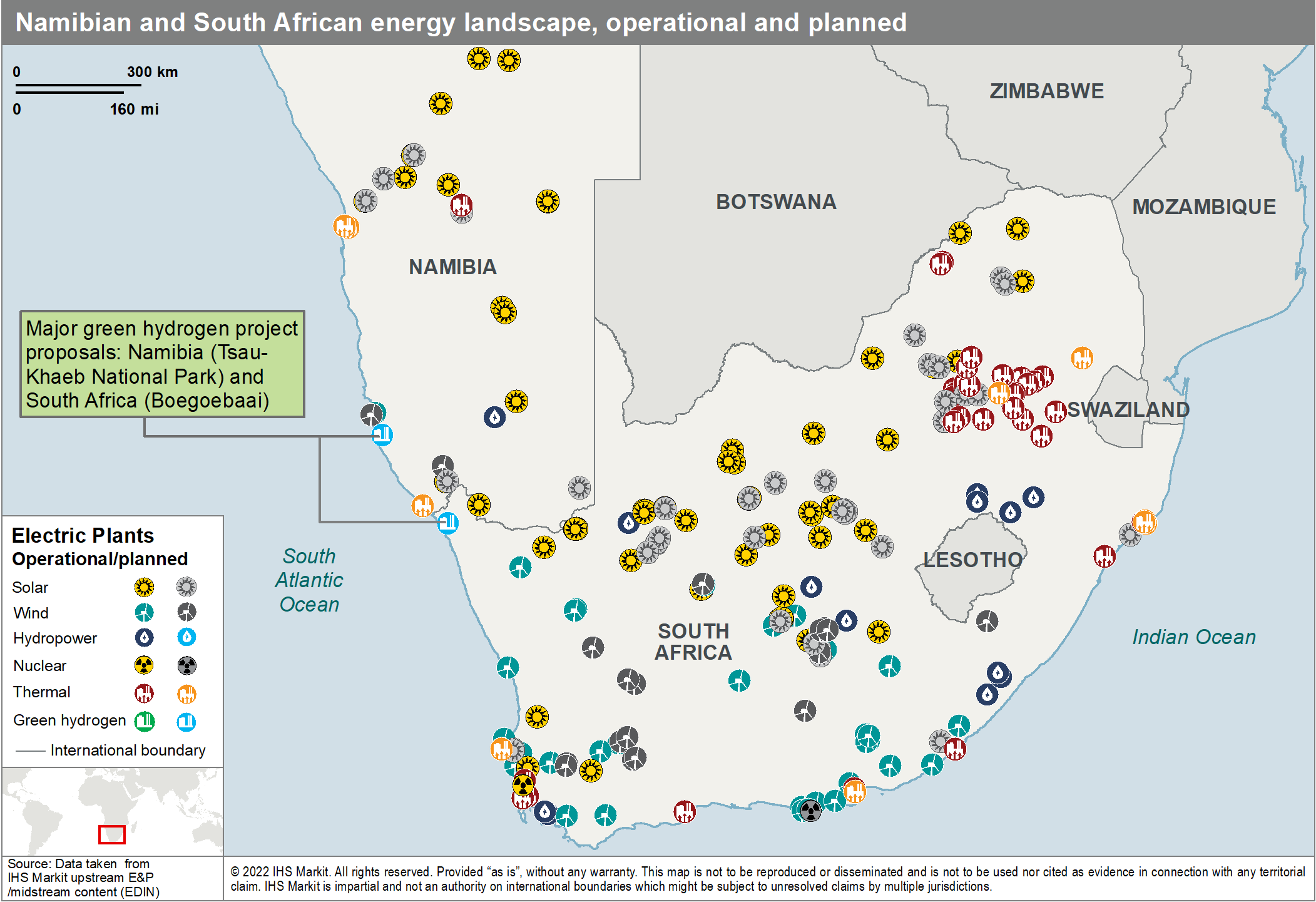 With all these elements in place, the Orange Subbasin may become an example of how frontier exploration in upstream might evolve, whereby it is undertaken as part of a broad based and synergistic sustainable energy strategy for the future.

The excitement surrounding the opportunities is understandable, but there will be challenges

Like a large majority of African countries, Namibia currently is a net fuel importer. Namibia will be looking to become a new global fuel and energy exporter, as well as a regional supplier to surrounding countries.

The challenge for upstream operators is to limit carbon emissions while fast-tracking monetization of both oil and gas resources. The limits of upstream technology are set to be tested at the Venus field location, in water depths of nearly 3000 meters; and in the near term there will be challenges in securing access to shipyards for conveyance of floating production vessels in an already stretched supply chain; and in cost inflation, with steel accounting for 20-30% of the cost of a newbuild hull. FPSO newbuild contractors were already facing higher steel prices, but sanctions against Russia have exacerbated supply chain issues and inflated steel prices further.

Notwithstanding, the new hydrocarbon resource additions will allow Namibia to finally revolutionize its energy sector and welcome the influx of substantial new investment.

For more information regarding commercial and strategic insights into basins in Sub-Saharan Africa, please refer to Plays and Basins

For more information regarding contractual, fiscal and above-ground risk, please refer to PEPS

For more information regarding well, field and basin summaries and midstream infrastructure, please refer to EDIN

For detailed E&P activity coverage and context by country/territory, please refer to GEPS

Want to learn more on this topic and access similar reports? Try free access to the Upstream Oil & Gas Hub to explore selected energy research, analysis, and insights, in one integrated platform.