As the second most populous country supporting 18% of the world's population, India faces serious risks for global inaction on climate change. As per Germanwatch's latest Climate Risk Index, India ranks third among 176 countries with 610 fatalities per million and second in terms of GDP losses from climate change. The Reserve Bank of India estimates that the economic losses due to climate change have doubled over the previous decade, and a third of these damages traced back to the agriculture sector which remains highly vulnerable[i]. Climate change hence poses a system-wide contagion risks which threatens India's progress on the UN's Sustainable Development Goals[ii].

At the 26th Conference of Parties (COP) in Glasgow, India announced its ratcheted Nationally Determined Contribution (NDC), including 500 GW of clean energy capacity, 50% share of renewables in generating capacity by 2030, and net GHG neutrality by 2070. It also exhorted the developed countries to extend $1 trillion/year climate financing support to the developing countries, including a requirement of around $200 billion annually till 2030 to meet its own NDC goals. Besides, it is estimated that India would require about $2.5-3 trillion by 2030 to meet the UN Sustainable Development Goals (SDGs).

The latest IPCC report on climate finance suggests a major gaps in investment funding for countries like India, which require 4-9% of their annual GDP to achieve their climate goals. However, the global financial aid for climate action represents just about 1% of India's annual requirements. Total financial flows from seventeen dedicated climate funds since inception have been less than 4% of the amount reported by the OECD countries. The conclusion is clear: pushing global North to do more has not worked. India must adopt the atma-nirbhar (self-reliance) approach to nudge and pull climate finance.

The pull of carbon markets

India has a rich experience of participating in the Clean Development Mechanism (CDM), under the Kyoto Protocol (KP). It allowed the developed (or Annex-I) countries to assist developing nations achieve multiple sustainable development (SD) objectives in exchange for importing cheaper emission reductions. Till date about $120 billion has been invested in Indian CDM projects, representing over one-fifth of global CDM investment. Majority of this reflects foreign inflows either through direct investment in technology and infrastructure, or via Certified Emission Reduction (CER) exports.

A proven CDM track record, sustainable development aspirations and gaps in clean technology access places India as a potentially dominant supplier in the emerging global mitigation market under Article VI of the Paris Agreement. With the developed West committing to net GHG neutrality by 2050 in line with 1.5°C target, the clamour for cost-effective and credible offsets is growing by the day.

Environmental, Social, and Governance (ESG) principles aimed at mitigating operational and supply chain risks are causing companies to commit to voluntary emission reduction under the Science Based Targets Initiative (SBTi[iii]). So far over 6,000 firms globally have declared voluntary targets, some in line with 1.5-2°C goals. Among the hard-to-abate sectors, the International Civil Aviation Organization aims to achieve net neutrality through the CORSIA (Carbon Offsetting and Reduction Scheme for International Aviation) scheme[iv]. The size of the global voluntary market is projected to grow from $1 billion presently to $100-200 billion by 2030[v]. Together, these markets present much larger credit exporting opportunity for India than CDM ever could.

Prices of carbon credits which have been historically suppressed until Paris Agreement have been on an upswing over past five years in line with the demand for new and 'additional' credits[vi][vii]. High prices improve the viability of small-scale projects, which have shown to have high co-benefit and SD impact. As an example, climate resilient agriculture is critical to India's development story. Voluntary credits attributed to Nature Based Solutions (including sustainable forest systems) are in high demand, fetching better prices than renewable energy credits. This represents a coincidence of wants whereby food production systems can be nudged in the sustainable direction by the carbon market. Carbon revenues can also support clean energy access and modernization in Small and Medium Enterprises (SMEs), creating sustainable livelihoods in the process. Carbon markets can also provide India with the technological and financial support for faster diffusion of emerging clean technologies such as electric vehicles, battery storage systems and green hydrogen. This releases funds for budgetary support towards an enabling infrastructure (hard and soft) for carbon market preparedness.

India is behind its global counterparts in developing a local Emission Trading System (ETS), although there are encouraging signals from the recently announced carbon market roadmap along with the launch of Surat ETS pilot[viii][ix]. India is already working towards utilizing the framework of Bureau of Energy Efficiency's Perform Achieve & Trade (PAT) scheme as the building blocks for transitioning into a full-fledged national carbon market[x]. As the first step, India needs to establish the architecture for free trade in universally accepted credits, develop a credible measurement, reporting and verification (MRV) system, and establish a price for carbon Second, India needs to build the domestic appetite for the global carbon commodity: a mix of top-down and bottom-up approaches is warranted to balance environmental integrity with industrial competitiveness. Lastly, it should incentivize high co-benefit yielding projects, and diligently implement Article VI guidelines on sustainable development

Clients can learn more about about India's carbon market roadmap, challenges, preparedness, and lessons learnt from global carbon trading schemes from our insight paper and webinar on these issues (must be an S&P Global Commodity Insights client to access). 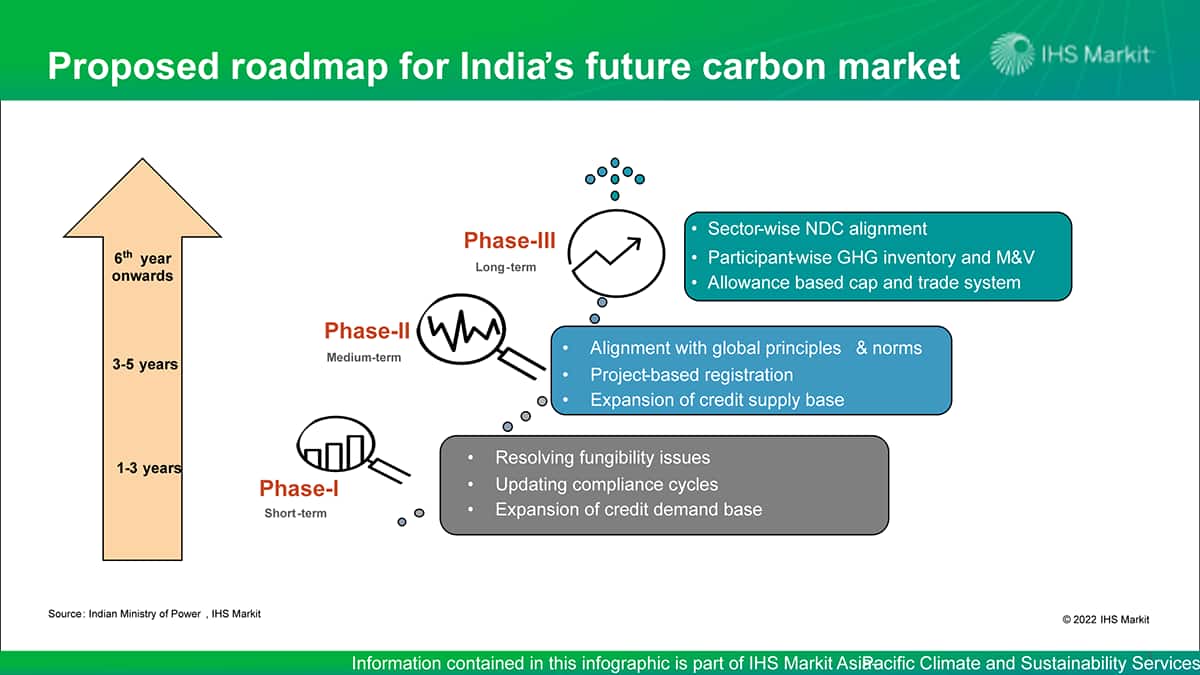 Learn more about our energy research in Asia Pacific.

Mohd. Sahil Ali is a senior sustainability analyst with the Climate and Sustainability practice, covering cross-cutting issues in energy and climate change for Indian and South Asian markets at S&P Global Commodity Insights.

[i] Climate change plays a role in short-term extreme weather events such as floods and cyclones, and longer-term changes in temperatures and weather patterns. These affect productivity, yields, cropping cycles and marketability of produce.

[ii] Issues of water stress, poor urban air quality, and unstable livelihoods can be traced back to the pattern of unsustainable resource-use since the industrialization era

[iv] At present, the CORSIA scheme is running on a voluntary basis, but its mitigation targets are set to become binding on member countries by 2025.

[v] Analysis by the Task Force on Scaling Voluntary Carbon Markets. Various assessments have placed it at $40-400, depending on the success of future climate agreements. The size is inclusive of all the credits generated under voluntary standards such as VERRA, Gold Standard, and CDM.

[vi] 'Additionality' of credits means that the emission reductions have been rigorously shown to have not been generated in the absence of carbon credit revenues.

[vii] In compliance schemes such as EU ETS prices have grown ten-fold to $90/tonCO2¬eq since the Paris Agreement.

[ix] Approximately 350 polluting industries participated in the Surat pilot, reducing their local pollutant emissions by 24%. The framework is expected to be extended into four new major cities in Gujarat. A GHG-based ETS is also in the works.

[x] The PAT scheme is India's first nation-wide a cap-and-trade market for industrial energy efficiency across energy intensive industrial sectors and units. Currently in its sixth cycle PAT has expanded from eight industrial sectors to 13 in the space of 5 years (PAT widening) and inducted more 'designated consumers' (DCs) within each category (PAT deepening). Each cycle comprises of roughly three years, and it is common for successive cycles to overlap by 2 years.

#upstream - #Mozambique is celebrating the shipment of its first #LNG cargo from the offshore Coral South field in… https://t.co/FrXBSsVLWf