OPEC+ tapering of cuts could benefit oil tanker demand from May

The decision by OPEC and its partners to unwind production quotas from next month bodes well for tanker demand, even as data shows that seaborne crude shipments by OPEC producers increased month on month in March, primarily driven by higher exports from Iraq, the UAE, Angola and Libya.

Total shipments climbed to 19.3 million b/d, from 18.1 million b/d in February, according to preliminary data from IHS Markit Commodities At Sea (CAS).

Saudi Arabia exported 300,000 b/d more than a month ago, even though it had pledged a voluntary unilateral one million b/d production reduction in February and March. A deep backwardated structure in crude futures prices likely prompted some destocking from domestic storage, which, along with some refinery maintenance in the kingdom, partly explained why Saudi Arabian crude exports did not decrease.

Seaborne exports from Russia, the biggest Plus producer, fell to four million b/d from 4.4 million b/d a month ago, taking flows from the OPEC+ group up to 26.8 million b/d from 25.9 million b/d in February. Most recent data by Commodities at Sea show that global seaborne crude oil exports remained below 40 million b/d for a third consecutive month, with US output impacted sharply by freezing temperatures in the south.

At its monthly meeting on April 1, OPEC+ agreed to loosen output quotas by 2.25 million b/d between now and July, a move that had been already anticipated given the tighter global crude market expected in H2.

The coalition expects oil demand to recover further over the summer, with additions of up to three million b/d by July vs April, resulting in a supply deficit of 700,000 b/d between May and July, according to IHS Markit.

Growth in the U.S. meanwhile looks muted, with shale output potentially declining another 485,000 b/d by the end of the year and producers hesitant to bring on big increases.

One of the key questions going into the meeting was if both Russia and Kazakhstan would continue to be allowed to raise output, and how this would sit with other members in the coalition. Both countries raised their quotas by a combined 75,000 b/d in February and March and by 150,000 b/d in April. Media reports suggested Russia had been clamoring to raise output further while the UAE, fresh from the launch of its IFAD Murban crude oil futures contract, was also not keen on extending cuts.

The scenario of a quicker unwinding of production quotas has been a compromise for Saudi Arabia, which was earlier targeting to loosen production cuts only once Brent price approached $75/b.

The increases come when the Middle East will see peak demand for power generation in summer and Saudi Arabia likely has taken a bullish view of the market given it raised differentials for official selling prices for its May-loading crude to Asian customers by between 20 cents/b and 50 cents/b while U.S. and European bound cargoes saw some grades unchanged and others cut by between ten cents/b and 30 cents/b.

That said Asian buyers could balk at the higher differentials given the plethora of options from the North Sea and West Africa. As well, China is reportedly now taking in more Venezuelan and Iranian cargoes.

Iranian crude oil exports to China are estimated to have recently reached up to one million b/d in March, with most of the supply coming from floating storage, can we attribute this to a source?

Meanwhile negotiations between Washington and Tehran on sanctions relief are underway, with indirect talks kicking off this week between EU intermediaries in Vienna, although an immediate solution is not likely. Washington demands a full return to the JCPOA as a prerequisite to talks, while Tehran insists on lifting sanctions on its two million b/d of crude exports before it comes to the table.

Separately, exports out of Libya, which is exempt from the current production cuts, averaged 1.2 million b/d of crude oil in March, up 200,000 b/d from January. The country's oil production continues to grow amid the recent formation of an interim government.

The decision by OPEC+ to raise output has improved sentiment across oil tanker ship operators, with VLCC demand set to recover as crude oil production and exports should increase from May onwards.

Despite the temporary support driven by the six-day blockage of the Suez Canal last month, crude tanker freight rates remain under massive pressure, with several ships operating below break-even levels due to tonnage oversupply. Suezmax and Aframax spot earnings fell below $10,000 per day in late March, while VLCCs carrying crude oil from Middle East Gulf to China did not earn more than $1,000 per day. The additional oil supply should benefit tanker earnings, especially for bigger units, with brokers expecting VLCC earnings to increase by $5,000 to $10,000 per day. This despite European oil demand likely to remain stagnant due to slow rollout of vaccinations and fresh lockdown measures.

Activity has been rather limited during the Easter week, with several cargoes to be lifted in mid-April from the Middle East Gulf yet to be booked.

There are currently fewer than 20 VLCCs locked into storage work for more than 15 days. But with higher exports from May, the number of fixtures should start increasing from H2 April. 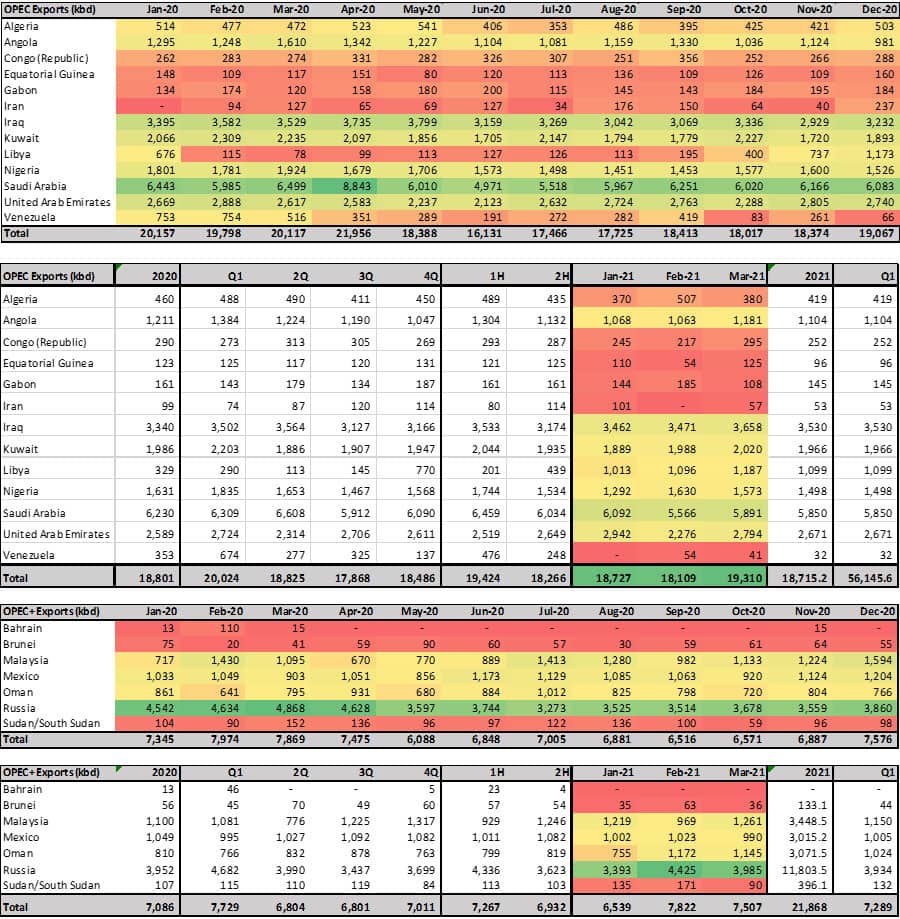 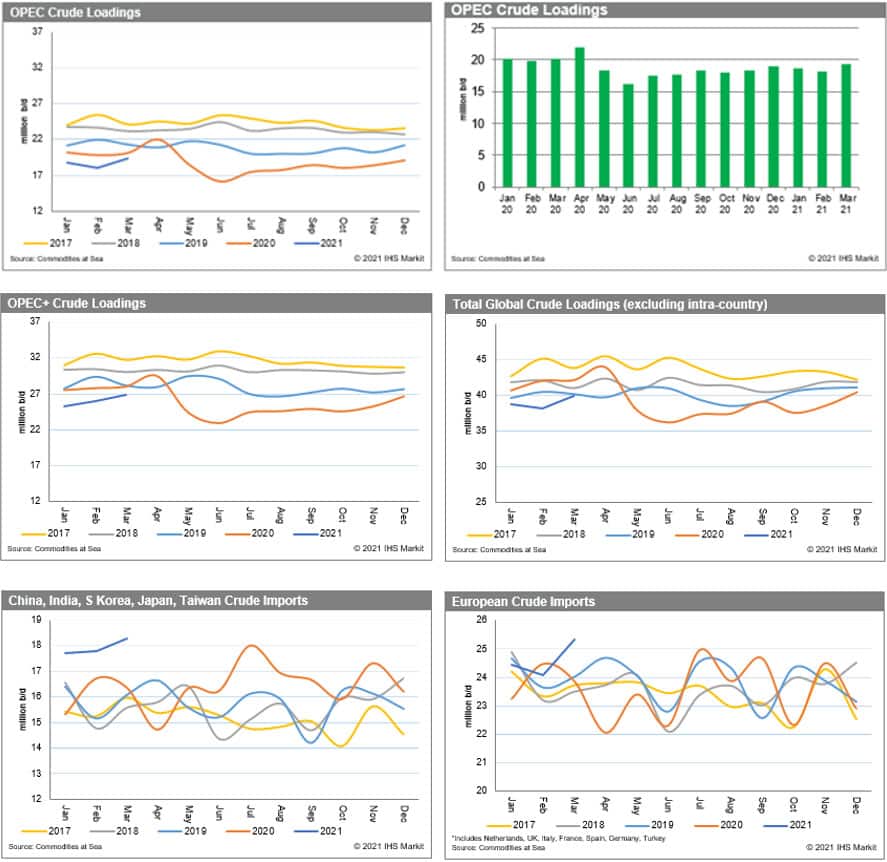