North Sea rig market in 2021: Not as good as it could have been

Contractors in the North Sea semisubmersible drilling rig market will consider 2021 a bit of a damp squib. In late 2020, there was optimism that following the coronavirus disease 2019 (COVID-19) dominated annus horribilis of 2020, the sector was starting to recover. In December 2020, Petrodata by IHS Markit's forecast for 2021 from North Sea Rig Report expected a noticeable rise in demand compared to the previous year. The chart below shows the December edition forecast represented by lines compared to the columns which show how the market actually behaved. 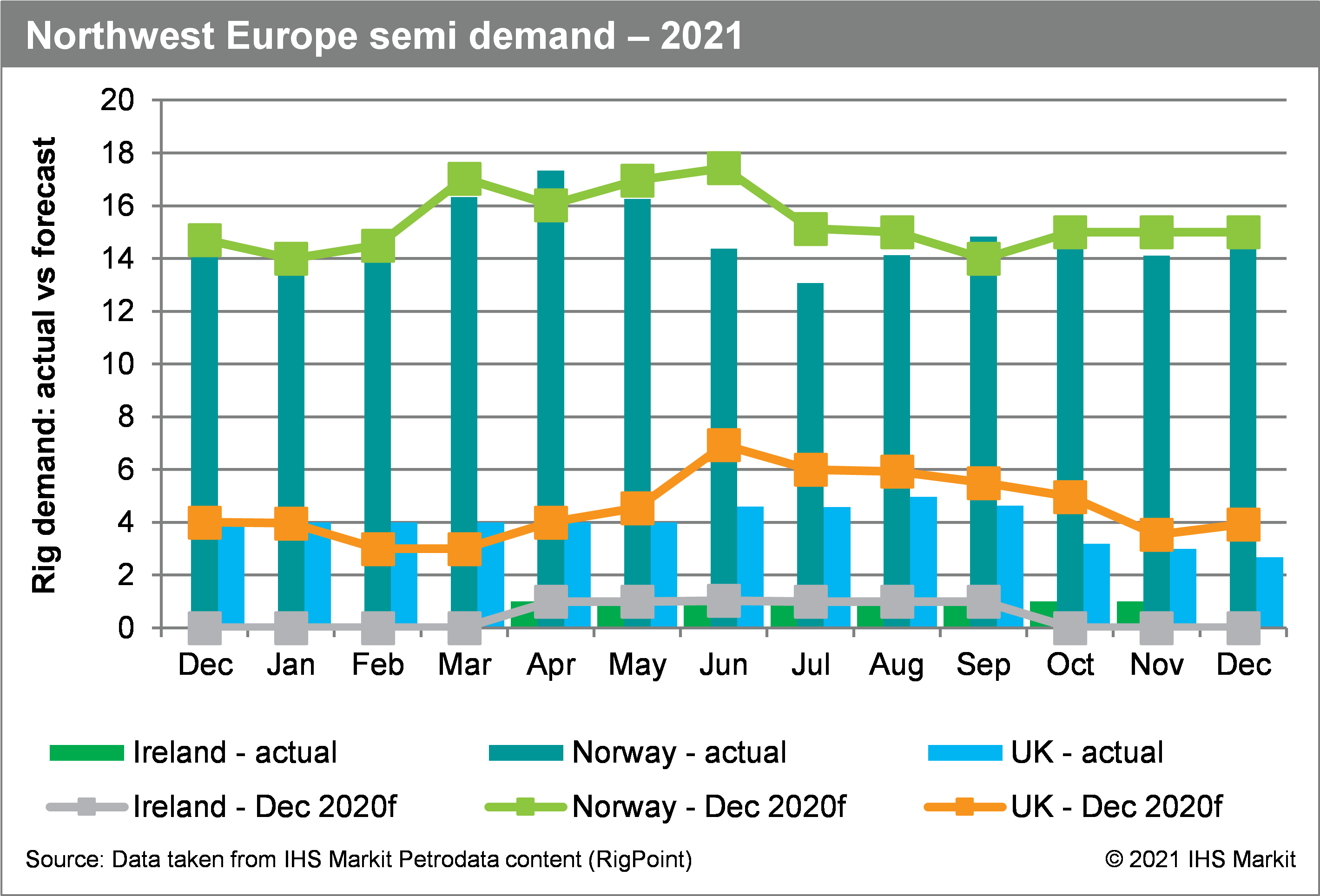 But both the Norwegian and United Kingdom sectors failed to live up to expectations. Semi demand in the UK sector peaked at five units as opposed to the expected seven. (This is in contrast to the 14 units under contract even only two years ago).

The UK semi sector is now so small that even the deferral of a handful of programmes can have a significant impact on its tightness. In 2021, the deferral of programmes such as CNOOC International's Ettrick plug-and-abandonment (P&A) programme, Hibiscus's Marigold field development programme, TotalEnergies' Benriach exploration well, Serica Energy's North Eigg high pressure, high temperature (HPHT) exploration well, and short-term programmes from smaller operators all contributed to the expected peak not materialising. Most of these programmes have been delayed to 2022 or 2023 but even then there is no guarantee of them all becoming firm.

The most well-known casualty this year has been Siccar Point Energy's nine-well Cambo programme. This deepwater requirement had already been deferred from a 2021 start to 2023, but following Shell's withdrawal now looks unlikely to happen at all. The project's high profile as a target for environmental pressure groups ensures it is a development that companies with the necessary experience and expertise are avoiding. This does not set a good precedent for the other remaining long-term West of Shetland field development, Rosebank, for which drilling had been expected to commence around 2024.

The UK semi market's structural challenges remain: predominantly short-term work focused over the summer means contractors can face up to six months of the year with no work for their available capacity. Added to this is a downturn in exploration in recent years meaning few prospects to appraise, and despite an oil price in the USD 70s and 80s for most of 2021, little sign of operators rushing to add requirements to the semi market backlog. From 2023 onwards it is telling that most of the large requirements are for plug-and-abandonment (P&A) work.

Norway's market also failed to reach the peak predicted at the end of last year, with activity dropping off in mid-2021 as a succession of units completed contracts. The most notable of these was West Mira, whose contract with Wintershall Dea was terminated after an incident that saw production equipment dropped to the seabed. The sixth-generation unit has not worked since May 2021. However, as 2021 progressed, the number of working rigs increased and the year has finished with 15 units under contract, the same number as predicted in the forecast.

The year 2022 is shaping up to be tricky for Norwegian contractors. There are only a handful of outstanding requirements, all of which are short term, and four units with no commitments at all in 2022. Island Innovator will leave the country in April 2022 to undertake work in the UK sector, with units such as COSLInnovator, Bideford Dolphin and Borgland Dolphin also being bid across the North Sea. Contractors are hoping that the expected increase in development drilling driven by the temporary tax incentives offered by the Norwegian government is the cavalry coming over the hill for 2023.

Jackup market
The chart below shows the relationship between the forecast from December 2020 and what actually happened to the jackup sector in 2021. The biggest concern for contractors this year has been the decline in strength of the Norwegian sector. As illustrated, even the modest gain in demand that was expected in 2021 did not materialise with the number of rigs under contract not varying much between 10 and 11 over the year. 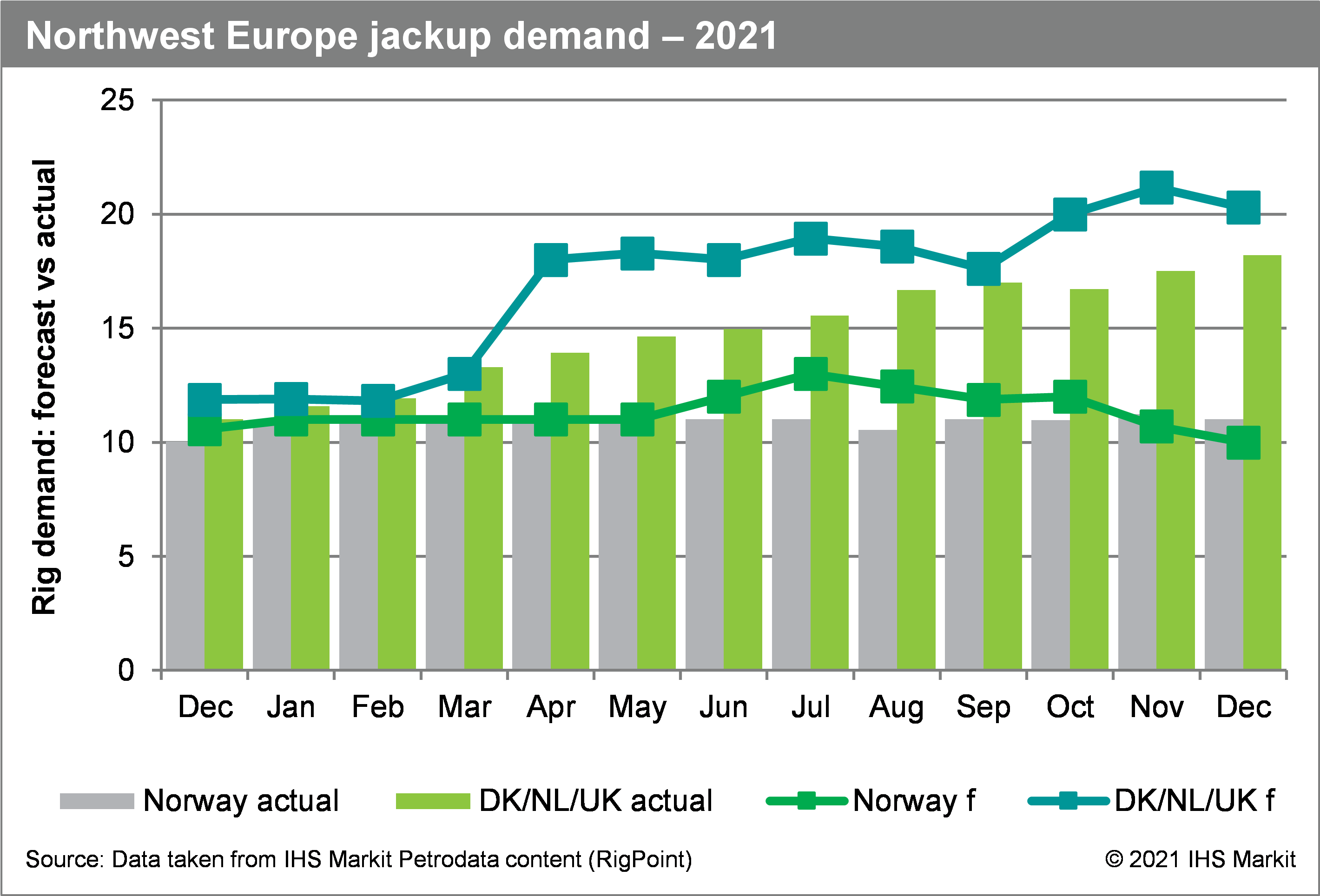 In addition to this, Norway-capable rigs such as Maersk Interceptor, Maersk Innovator and Maersk Reacher remained idle for most of the year, with only the last of these resuming work in Norway in 2021. The lack of requirements coming through has also seen fixture rates plummet, from peaks in the USD 270,000-300,000 range to closer to USD 170,000-200,000. Underlining the weakness was the departure of Valaris 292 (Norway) to the UK sector in November 2021 as the prospects for work in Norway in 2022 diminished. The arrival of Noble Lloyd Noble added another contractor into the mix, as Equinor tried to increase competition for CJ70 design units, but this will be cancelled out by the proposed merger between Noble and Maersk, which is due to take effect from mid-2022. But next year looks extremely quiet in Norway, with the market from 2023 onwards dependant to a large extent on which developments progress from Aker BP and Equinor.

The most successful year in terms of increasing rig demand was seen in the UK, Dutch, and Danish jackup markets. Although activity levels did not follow the pattern of the forecast exactly there was a clear increase in demand as 2021 wore on. A number of programmes that had been delayed from 2020 due to the pandemic actually materialised, especially from the likes of INEOS and Harbour Energy. Although requirements are outstanding from the likes of TotalEnergies (in the United Kingdom, Netherlands, and Denmark), BP and Spirit Energy, most demand in 2022 remains short term in duration, and as in the semi market competition is available from under-employed Norwegian rigs.

For more data and insight on the global offshore drilling market use RigPoint by IHS Markit. The platform provides data and reports on the industry dating back to 1984 and offers unparalleled information on rig supply, demand and specifications. It is maintained by a team of analysts with a combined 90+ years of experience on reporting the offshore rig market, with access to IHS Markit's deep knowledge and understanding of upcoming exploration plans, field developments and the upstream sector, provided by around 900 analysts and experts.