The growing importance of the application of horizontal wells and hydraulic fracturing to boost recoveries from tight and under-performing conventional reservoirs is exemplified by a recently announced group development project in the Powder River Basin. The Unconventional Oil and Gas revolution in North America created a new boom for North American energy supplies which was driven by application of new technology Horizontal drilling and hydraulic fracturing are the most cited technological keys for unlocking commercial oil production from tight rocks. The new oil and gas boom also has changed the conventional oil and gas playing field. Today we are seeing legacy asset revivals in many areas of North America, including the Permian Basin, the Anadarko Basin, the Powder River Basin and other oil and gas rich basins. The key components of this conventional revival are the “unconventional technologies” cited which are now being used to unlock the “not so tight” conventional rocks. Other key enablers include increased operational efficiency, leveraging and capitalizing on in-place infrastructure and the benefits of working in areas of historic production with communities that understand the industry. Companies are reevaluating legacy reservoirs from top to bottom and expanding the use of traditional borehole data plus reservoir analytical modeling tools to recover left behind and previously uneconomic to produce hydrocarbons. With an average recovery factor of 34% for a conventional oil reservoir, there is plenty of upside potential to improve that recovery factor.

The growing importance of the application of horizontal wells and hydraulic fracturing to boost recoveries from tight and under-performing conventional reservoirs is exemplified by a recently announced group development project in Wyoming’s Powder River Basin. The proposed 5,000 well development project involving seven or eight Cretaceous producing reservoirs in Converse County, Wyoming is the first evidence that emerging tight conventional reservoir developments might rival some of the shale/resource plays. 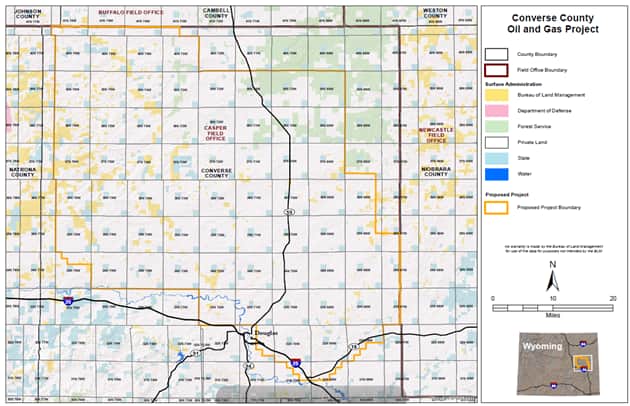 The Operator Group would drill the new horizontal oil and gas wells on 1,500 wellpads over a ten-year period between 2018 and 2027. Each well pad would contain between one and 16 wellbores. The productive life of each well is estimated to be approximately 30 years. Horizontal targets include the Cretaceous Turner, Parkman, Teapot, Shannon, Sussex, Frontier and Niobrara formations. While the Niobrara has become a well-known unconventional oil play, the other more conventional target zones represent formations that only produced at low rates from historical vertical wells.

Operators are interested in applying unconventional techniques to these conventional, but low productivity formations because the production from horizontal wells is so much greater than the production from the old vertical wells in the area and economics are attractive. Initial potential (IP) tests from the early vertical wells averaged only tens of barrels per day. New horizontal wells are producing hundreds of barrels of oil daily in initial potential 24-hour test rates. It should be noted that in some parts of the project area, the stacked pay nature of the geology means that vertical wells can still produce economically from multiple zones in one wellbore. However, modern hydraulic fracturing techniques must still be applied to optimize recoveries. Figure 2 below shows the oil and gas average IP rates from horizontal wells for both oil and gas in barrels of oil equivalent. 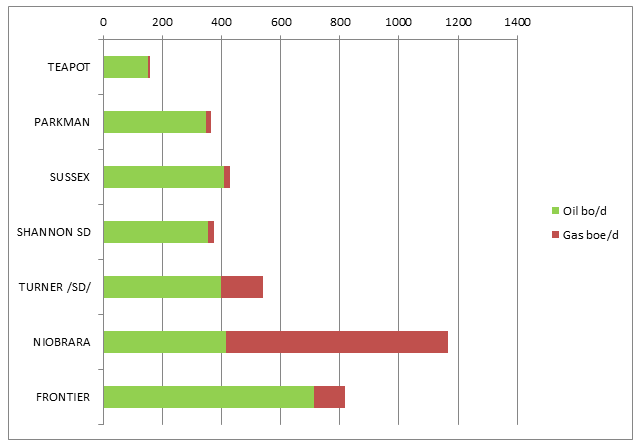 EOG Resources underscored its commitment to the new Powder River project area and the Niobrara play farther to the south by moving four horizontal plays in the Denver-Julesburg and Powder River basins from the “evaluation phase” into its “high rate-of-return” drilling portfolio. With combined estimated net potential reserves of approximately 400 million bbls of oil equivalent (MMboe), the Niobrara/Codell, Parkman and Turner plays are generating excellent rates of return and remarkably consistent well results, due in part to reductions in drilling costs and advancements in completion techniques, according to the company.

In the Powder River Basin, EOG is developing Parkman and Turner reserves on its Crossbow prospect on the area’s northern flank. Year-to-date, EOG has completed six net wells in the Parkman formation. Estimated potential reserves on EOG's 30,000 net Parkman acres are 75 MMboe, net, of which approximately 69 percent is crude oil. In the Turner formation, where EOG has been very active in Campbell and Converse counties, recent EOG wells are producing 34 percent crude oil versus 26 percent several years ago thanks to ongoing completion technology enhancements. EOG plans to drill six net wells during 2014 in the Turner where estimated potential net reserves are 115 MMboe.

EOG’s Chairman and CEO William R. “Bill” Thomas recently said, "As we've stated in the past, EOG's Eagle Ford and Bakken assets have set the bar high for any new play we might consider adding to our top-tier drilling portfolio. The Codell, Niobrara, Turner and Parkman each meet our stringent funding hurdles, adding 400 MMboe, net, of potential reserves and 735 net drilling locations to our drilling inventory,"

To illustrate Mr. Thomas’s remarks about the Bakken and Eagle Ford plays setting the bar high for new plays like those in the Converse County Oil & Gas Project area, Figure 3 below puts the Powder River project formations’ average initial potential test rates in context with other US plays. The Powder River plays average test rates are in yellow and hold their own in the rankings of the top 26 US plays. 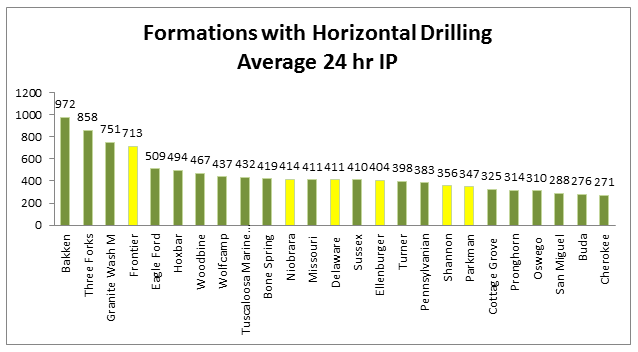 Other “unconventional” activity in mature conventional plays is on the rise across the US At least 300 plays have been tested with at least one horizontal well. IHS, in a forthcoming multi-client study, The Replacement Imperative, on this topic, has identified at least 51 promising mature conventional plays where horizontal drilling and unconventional completion technology is taking place and may work to revitalize the older plays. In North America, the diversity of play formation ages and geologic settings indicates the unconventional techniques are broadly applicable, suggesting that they can be applied to the more than 2,000 low productivity plays worldwide.