Thanks to Kevjn Lim for his contribution to this report.

Iraq's power system has struggled for decades, with chronic power outages, high losses, and gas supply shortfalls plaguing the power sector and weighing on the country's economy. In July 2021, blackouts across Iraq and simultaneous cessation of Iranian power imports triggered mass protests and highlighted the risk of energy overreliance on Iran. Several development programs have been launched to build much-needed power capacity. But these have been exposed to a combination of macroeconomic, political, and violent risks. This challenging risk environment will likely continue to hinder new investments in Iraq's power generation.

Iraq faces mounting power deficit mainly because of its low power capacity availability. The power plants' reliable capacity—that is effectively able to produce electricity—only accounts for about half of their total nameplate capacity and thus has been unable to meet the country's rising power peak demand (see Figure 1). In addition, losses in the power network account for about half of the total demand, owing to high technical transmission and distribution losses and rising nontechnical losses, such as electricity theft from the grid and unpaid power bills. 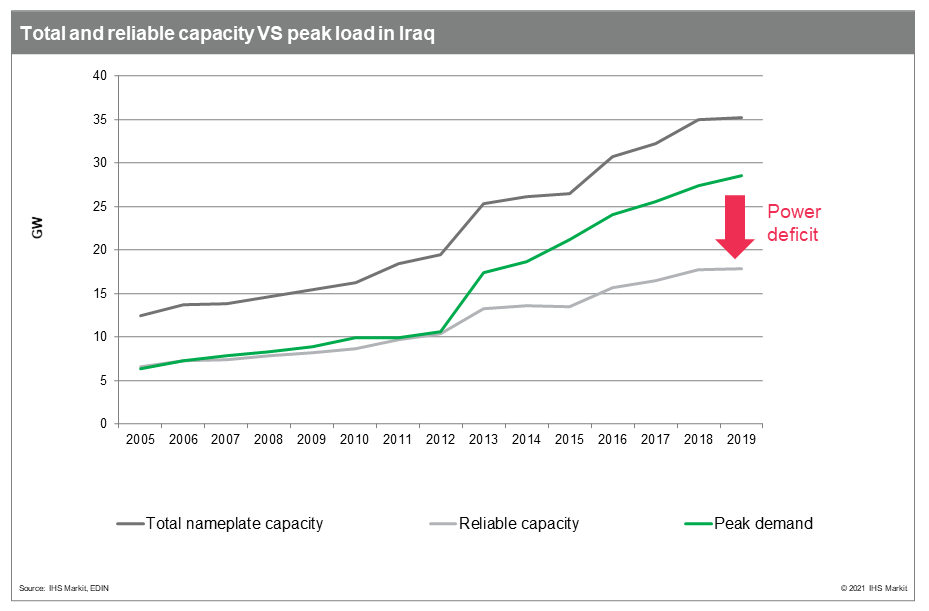 At the end of the line, end users undergo daily power cuts from the national grid, and therefore, often rely on expensive private generator businesses. This translates into a more costly and inefficient power supply system, since inhabitants pay excessive power charges, while grid power supply does not recover its generation costs.

On the fuel supply side, Iraq lacks domestic gas supply and infrastructure, which contributes to persistent electricity shortages. Iraq relies on Iran for both power and gas imports, making it vulnerable to supply disruption from Iran and US economic sanctions.

Political, security, and macroeconomic risks are affecting Iraqi power investments. Terrorist attacks related to the Islamic State are still a threat to recent power projects. Both contract risks—arising from corruption and political interferences—and macroeconomic risks—such as the COVID-19-related crisis and the government's overreliance on oil revenues—have precluded the implementation of power investments. External and internal political risks, including political wrangling likely to emanate from legislative elections held in October 2021, will likely exert pressures on power generation and interconnection projects.

To learn more about our renewable energy research, visit our Global Power and Renewables service page.

Elsa Kiener, senior research analyst with the Climate and Sustainability group at IHS Markit, is responsible for electricity market research in the Middle East and Africa.