Malaysia’s new Energy Transition Plan: Lower renewable capacity addition and a phase out of coal leads to a sizeable increase in gas requirements and affordability concern

In June 2021, Malaysia's Minister of Energy and Natural Resources presented Malaysia's energy transition plan until 2040 at the ASEAN Minister of Energy Meeting. Two key highlights were Malaysia's increased renewable target of 31% by 2025 and 40% by 2035, from the 20% by 2025 target set in 2019/20 and the statement made that Malaysia will not be building new coal power plants.

On the surface, it seemed that the country has set a more ambitious target for itself in 2021. However, upon closer analysis of the Report on Peninsular Malaysia Generation Development Plan (which was mentioned by the minister as Peninsular Malaysia accounts for around 80% of Malaysia's power consumption), the newly announced target now includes large hydropower capacity, which currently has an installed capacity of around 2.1 GW. This may be a result of the lackluster performance in the latest large-scale solar photovoltaic (PV) tender, where almost 180 MW or 17% of the capacity up for awards was left on the table. 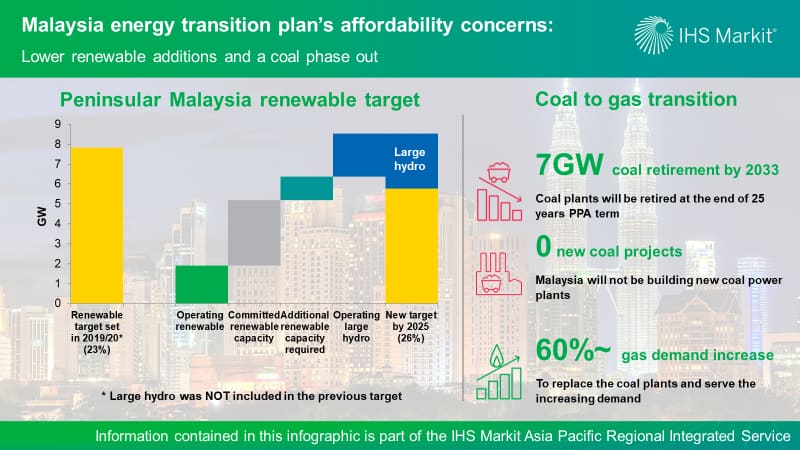 There is currently around 2 GW of solar capacity that has already been awarded via the large-scale solar tenders and net-metering scheme, around 700 MW from small hydro and biomass/gas tenders in 2020/21 and 600 MW of planned large hydro capacity, all of which will contribute to the 2025 target in Peninsular Malaysia. This leaves slightly more than 1 GW of capacity to reach the target, of which 500 MW will come from the third net energy metering (NEM) scheme.

No new coal plants to be built, and early retirement for existing capacity

There is currently around 13 GW of coal-fired generation installed in Malaysia, of which, 12 GW is situated in Peninsular Malaysia. The minister made a statement that "more than 7,000 MW of coal power plants' power purchase agreement will expire by 2033", and that "Malaysia will not be building new coal power plants".

The first part of the statement is aligned with the 2020 Report on Peninsular Malaysia Generation Development Plans issued by the Suruhanjaya Tenaga, Malaysia's energy regulator in March 2021, where around 7 GW of capacity will be gradually retired by 2033 at the end of their respective 25-year power purchase agreement. Majority of the planned retirements can be classified as being retired early, before the end of their technical life.

The latter part of the minister's statement runs contrary to the report, where 2.8 GW of additional coal-fired capacity is still in the plans post-2030. Therefore, if the latest government statement on coal indicates the new direction, this would mean that more gas-fired capacity than originally planned will need to be developed to maintain a similar reserve margin level, assuming the renewable capacity target caps their development. Under the scenario that gas-fired generation fills the gap left by coal-fired capacity retirements and no new coal additions, gas required for power generation in Peninsular Malaysia will rise by around 60%. This will result in higher power prices, as coal was one of the lowest cost dispatchable generation source in Peninsular Malaysia.

Learn more about our Asia Pacific power and renewables research.

Joo Yeow Lee, an associate director with the Climate and Sustainability team at IHS Markit, covers the power and renewable markets in Southeast Asia.