The COVID-19 demand and price collapse has reduced Canadian oil sands production outlook to 2030 to the lowest point in the past half-decade, but the trajectory remains similar to prior expectations.

Before COVID-19 2020 had the potential to mark a turning point in the Canadian oil sands. Long-lead time projects had been completed, the industry had retooled and lowered its cost structure, and free cash flow had improved considerably. For example, pre-dividend free cash flow for the four largest oil sands producers increased three-fold from 2014 an average of more than $USD2.5 billion each in 2019. Moreover, limitations in regional export capacity that had plagued the industry for the past half-decade had the potential to rise by well over half a million barrels per day (b/d) over the next 12 to 18 months from a combination of rail and pipeline capacity. The increased export capacity promised to provide greater regional price stability, a potential easing of the Government of Alberta's mandatory production curtailment, and support a year-on-year rise in Canadian oil sands output of nearly 200,000 b/d.

Instead, 2020 will mark the single largest production drop in the history of the Canadian oil sands—an industry that has almost always seen year-on-year additions. Even in 2016, when the great Fort McMurray wildfire caused operations to temporarily shutter across the oil sands, annualized output still managed to exceed that of the prior year. 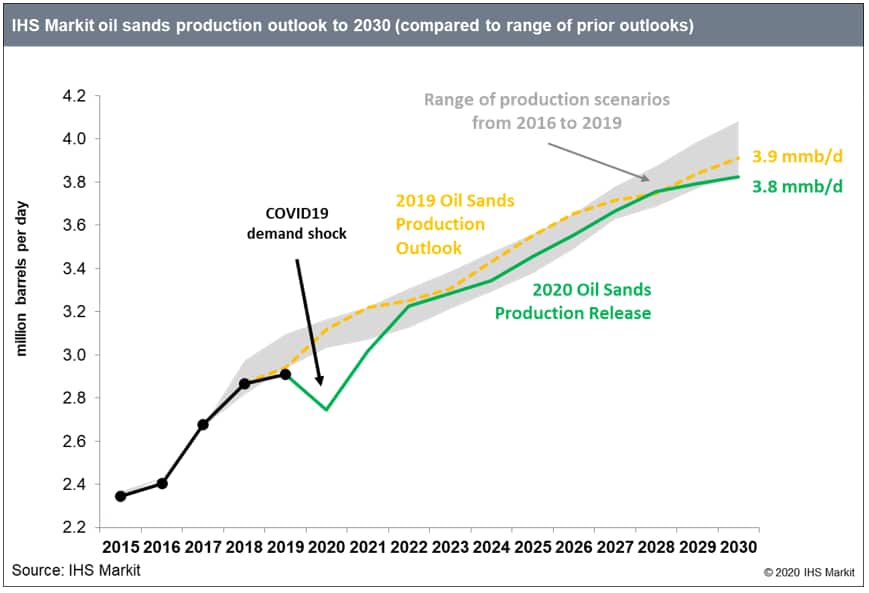 Figure 1: Oil sands production outlook to 2030 (compared to range of prior outlooks)

Recent reductions—albeit dramatic—are likely to be only temporary and curtailed output is expected to return. Production is anticipated to rise over the back half of 2020 and into 2021. This will be driven by curtailed production coming back online and the ramp-up of existing installed capacity that has never been fully utilized. Should the Government of Alberta ease it's regulated curtailment, oil sands output could rise nearly 500,000 b/d from 2020 to 2022 (over 300,000 b/d higher than 2019).

Although production is expected to recover, and even exceed historical heights in the next few years, looking out longer term, oil sands growth will decelerate. Since 2014 the decline in upstream oil sands spending has led to a steady reduction of the number projects in development. Indeed, there are currently no new projects in construction. The extreme low price-environment of early 2020 will ensure planned investments are further delayed and the trajectory of growth will slow.

The COVID-19 demand and price collapse has reduced the IHS Markit long-term Canadian oil sands production expectation to 2030 to the lowest point in the past half-decade, but the overall trajectory remains similar to our prior expectations. In 2019, IHS Markit projected Canadian oil sands output to reach 3.9 mmb/d in 2030 and now we expect it could reach about 3.8 mmb/d. This is because even in the absence of COVID19 price shock, regional price insecurity was anticipated to weigh on oil sands investment and growth until confidence about the adequacy of pipeline export capacity improved. This would require more than the aforementioned anticipated export additions over the coming 12-18 months and a period of price insecurity was expected last into the early 2020s. The impact of COVID19 has changed the driver of the lower investment period, not necessarily the direction of long-term expectations. 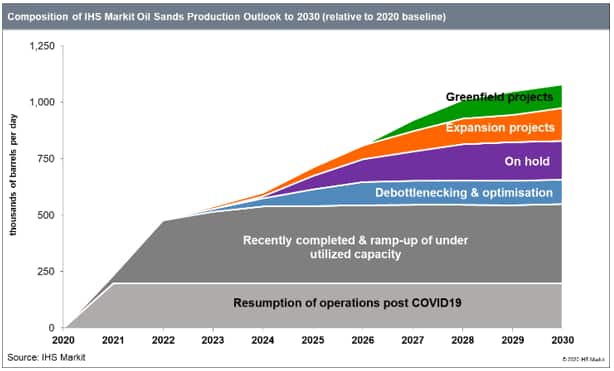 IHS Markit current outlook sees Canadian oil sands production reaching 3.8 million b/d by 2030—nearly 1.1 million b/d greater than today's level, While a significant rise over the coming decade, over half of this increase will come from COVID19 recovery and ramp-up of existing production capacity. The other half of just over 500,000 b/d of growth, is expected to come from incremental investments in new capacity and, of that, roughly half of that growth is anticipated to come from projects where some capital has already been deployed. This includes projects that are on hold and where some initial work has already occurred, as well as debottlenecking and optimization projects that can deliver greater output and lower costs in the process. In total less than a third of anticipated growth to 2030 is expected to come from new projects which include entirely new greenfield operations and expansions of existing facilities.

Although the anticipated rise in production by 2030 is at the lowest point in half a decade, the scale of installed production capacity that exists today, the lack of material production declines (in the medium to long-term) from existing operations, and the ability to optimize and leverage current operations are supportive of growth in the Canadian oil sands. However, uncertainties remain, including the long-term impact of COVID19 on the global oil market, the timing of which new pipelines can be brought online to provide greater regional price stability for western Canadian producers, and the pace of which the oil sands industry can adapt to changing pressure from energy transition.