Local content in Guyana – The first step was taken

General context
Guyanese offshore reserves in Stabroek block achieved an estimated amount of 11 billion barrels of oil recoverable out of more than 30 discoveries, being the last one made last April. The production coming from the two already operating FPSOs is almost 200 thousand barrels of oil per day, operated by Exxon Mobil under PSA contract signed in 2016.

As we observe in most Latin American countries, the political scenario could turn things around briefly. In 2020 a new government was elected in Guyana, promising, between other measures, to increase the social benefit of the oil revenues produced in the country. One of the measures chosen by the new government was to seek the implementation of local content requirements for oil exploration and production. It´s common sense that when huge natural resources are found by international companies, mainly in undeveloped countries, the usual practice leads the government to impose local content measures.

The discussion about local content in Guyana was not easy given the country´s relative lack of experience in the oil business. To complicate, there are plenty of examples in different parts of the world of similar initiatives that also result in mixed feelings. It´s kind of a double-edged sword: it´s difficult to evaluate where the optimum lies between the risk and benefit of such measures.

After a long debate, in early 2022 the Guyanese government approved the first framework with metrics and targets for local content in the upstream oil and gas projects. The new framework requires operators and their contractors to prioritize Guyanese workforce and companies in the procurement of a list of 40 items, with goods but most focused on services and labor. There are percent targets ranging from 5% for higher complexity services to 100% for general support services, together with guidelines on how to report and develop the targets. This new framework will be applied for the new and for the existing projects on development.

Details
The new local content governance has the common structure of goals and outputs of several related regulations from other countries.

The general rationale of the framework is to provide a relatively simple list of requirements and define events for the evaluation of a master plan that must be prepared by the main players (licensees, large contractors, and sub-contractors) for the achievement and further development of the local content. 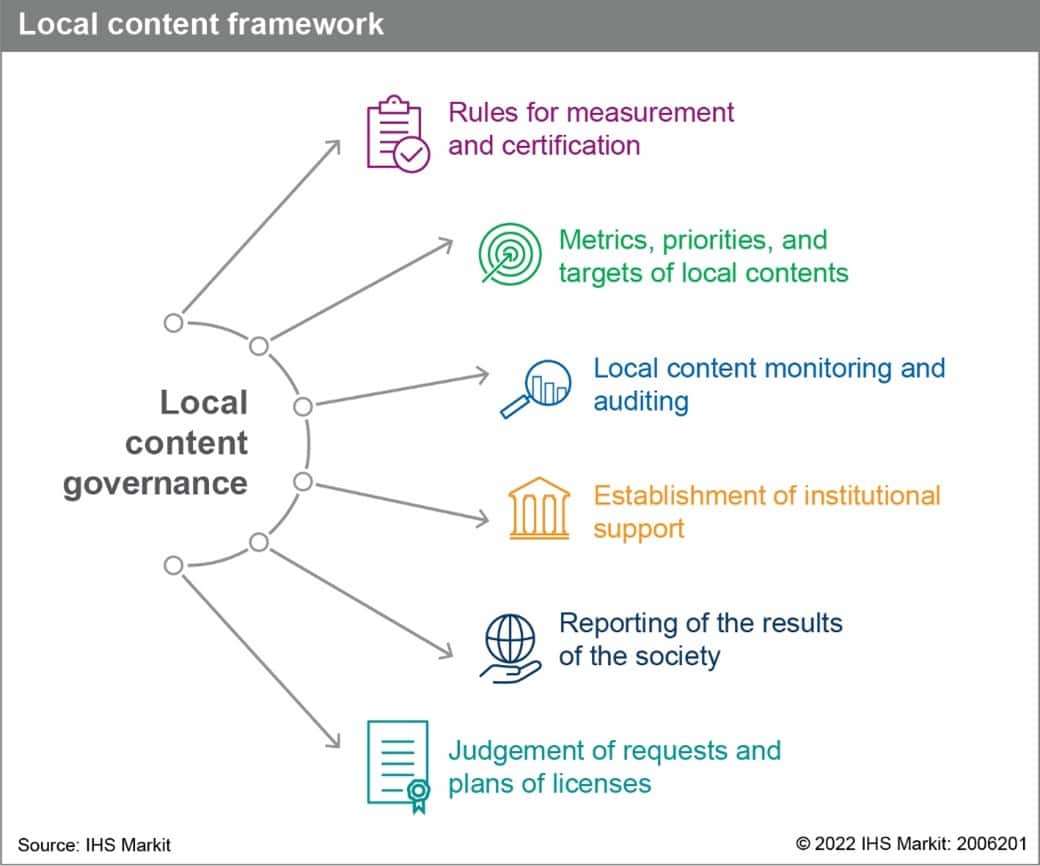 The plans presented for the government will be evaluated by a multidisciplinary committee and approved or not. In case of approval, they follow the periodic review of annual plans containing more details of the more immediate measures to be taken.

It´s noticeable that, opposite to observed in other countries, there is no differentiation between the exploration, development, and operation phases. It is assumed that the plan will have to cover the project's lifetime and will be evaluated by the evolution and pace of the proposed achievements.

What to expect
Guyana's local content framework has at the same time, a potential risk perception, in the form of a Master Local Content Plan that must be approved, and the necessary flexibility, considering an environment much more challenging than in other countries, and avoiding bottlenecks that can jeopardize the projects schedule. Some other Latin American countries, as Brazil, have struggled in the past due to heavy and excessive detailed national contribution requirements.

The Guianese government succeeded in avoiding establishing over-demanding or unrealistic targets that would delay investment before developing expertise in measuring and coordinating industrial development actions. It seems in this early step a lack in define the adequate institutional support to guarantee the return in social benefit of the local investments, that should be the focus of the evolution of the governance system instead of the growth in targets.

The importance of this first step is mainly due to the large volume of investments that will be directed to Guyana. S&P Global estimates that around $22 billion will be poured into offshore projects in Guyana for the next five years and both the government and Guyanese society wants a bigger slice of that pie.

Want to learn more on this topic? Try free access to the Upstream Oil & Gas Hub to explore Guyana research in our new Latin American Dashboard Tool report. The report includes all regional outlooks for several markets. Later this year we will be presenting a deep dive into the local content's possible impacts on the Guianese market.