Is it possible that Indian carbon credit exports to voluntary markets will be banned in the future?

In August, India's Power Minister Mr. RK Singh tabled the amendments to the Electricity Conservation Act. In his remarks, he seemed to suggest a blanket ban on the export of carbon credits. Voluntary offset market watchers went into tizzy as stocks of domestic trading houses fell sharply after the statement. Amid rife speculation on the extent and timeline of the ban, Mr. Singh clarified on 6th October that the suggested export restriction would only be to the extent required for India's Nationally Determined Contributions (NDCs) and not a blanket ban. In this article, S&P Global explores the conditions and timelines under which a partial or full ban on the carbon offset exports to the voluntary market may be instated.

While voluntary markets have existed since 2000s, these have assumed ever growing significance since the Paris Pact and the ensuing net zero goals by the major emitting countries. Private players looking to boost their sustainability credentials are increasingly enrolling in programs such as Science-based Targets Initiative (SbTI) and RE 100 to align their voluntary contributions with the global net-zero goal. Voluntary undertakings like this help to attract climate-conscious investor capital. This is evidenced in the increasing significance of Environmental, Social and Governance (ESG) norms and indices which have become the buzzword in the world of finance.

Voluntary buyers of such credits are primarily European and American companies, with nearly two-thirds and one thirds of the market share, respectively. Credit suppliers come almost exclusively from the developing world with South Asia leading the charge, followed by Latin America and Caribbean and Africa. India leads the pack, accounting for 40-50% of credits sold annually. The voluntary market governance, including standards, accounts, accreditation, issuance, and other fundamental functions are managed by private bodies not under the direct purview of the United Nations (UN) or governments.

The Article VI- related agreements at the 26th Conference of Parties (COP) 26 in Glasgow in November has been a watershed moment for the voluntary markets[i]. The ongoing efforts of the voluntary market regulators to improve the integrity and credibility of their offsets has been strengthened by the principle of 'Corresponding Adjustments' agreed at COP 26. Corresponding Adjustment stipulates that the accounting of traded mitigation credits in the national emission inventories must avoid double-counting. Therefore, the host country of a traded credit must adjust its national GHG inventory upwards by the amount of emissions reductions (or carbon credits) exported[ii].

Recent efforts such as the Voluntary Carbon Market Integrity Initiative (VCMI), seek to change the perceptions around the environmental integrity of voluntary credits by establishing the UN mandated/ recommended benchmarks. This would pave the path for an integrated system of accounting that merges public and private sector mitigation efforts. In this way, Corresponding Adjustments may become easier to apply on the voluntary markets. If this comes to pass, India may be forced by necessity to restrict exports of voluntary credits to meet its interim (2030) climate targets and 2070 net-zero goal.

However, it is highly likely that such a ban will be temporary until India gets back on the trajectory to meet its NDCs. As with its previous decarbonization commitments, if India again surpasses its revised NDCs ahead of time it will have all the incentive to export its surplus credits, potentially worth billions of dollars. S&P global estimates India's expected revenues from sales of voluntary carbon credits to reach $20-40 billion by 2030. (Customers can read the full report here.)

As to the question of when this ban would come into effect (if at all), it depends on,

If these conditions are fulfilled, major carbon-credit suppliers like India will need to account for such exchanges in the voluntary market within their emission inventories. If such accounting adversely affects India's global climate commitments, it is possible that India may temporarily freeze the sale of credits in the voluntary market. However, this situation is not likely to arise over the next 3-5 years, since a lot of work needs to be done to perfectly synchronize the voluntary markets with the UN guidelines and requirements[v]. Mr. Singh's August statements demonstrated vision and clarity regarding how 'corresponding adjustments' could affect India's NDCs performance. His October clarification was tempered with realism on the likelihood and timelines of this mandate being extended to voluntary markets. In this way, the apparent contradiction between the two pronouncements is resolved.

Needing finance for its ambitious net zero goal and being a significant beneficiary of carbon markets, India will resist the inclusion of voluntary or non-compliance market credits sales within its national GHG accounts. That way it can accelerate clean technology innovation and deployment at home without having to worry about how it may adversely affect its NDC performance. India's official carbon market blueprint envisages the coexistence of voluntary and compliance segments. This voluntary side will attract large North American and European firms looking to purchase cost-effective and quality emission offsets. Therefore, India is likely to leverage its position as a leading mitigation supplier globally to avoid having to impose any import restrictions on voluntary credit exports. 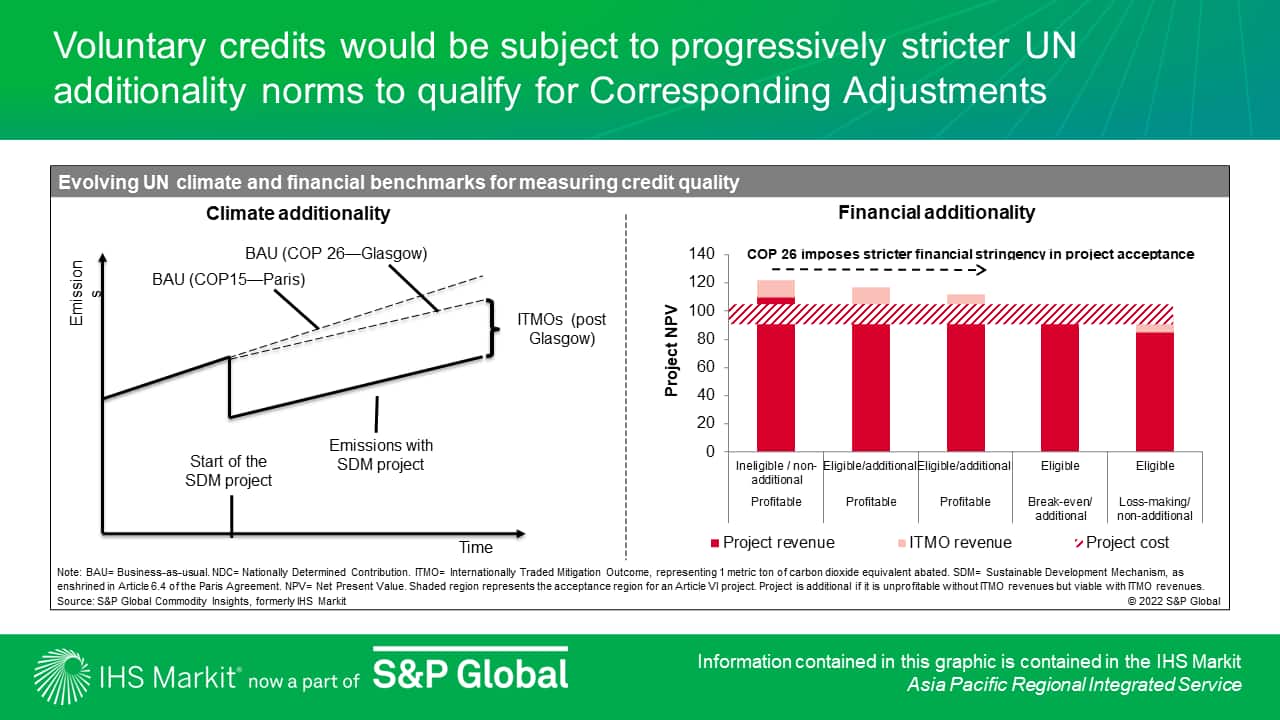 Learn more about our energy research and analysis in the Asia-Pacific region.

[i] Article VI lays out cooperative mechanisms between the Paris Pact (COP 15) signatories to trade in low-cost emission reductions to help achieve their NDCs and net zero goals.

[iii] This synchronization will be across platforms on the quality, transparency, and methodology aspects.

[iv] The Article VI Sustainable Development Mechanism, which serves as a successor to the Clean Development Mechanism that was established under the Kyoto Protocol of 1997, is also a voluntary framework under direct purview of the UN and the respective governments that choose to invest and/or trade in carbon credits. The Corresponding Adjustment principle organically applies here. Similarly, the CORSIA scheme aims to decarbonize international travel by private and public airliners envisages carbon trading. This is run by the International Civil Aviation Organization (ICAO)—a UN-affiliated body—and therefore the trades will be easily accountable within the UN framework.

[v] As an example, over four-fifths of the voluntary market transactions happen over the counter or bilaterally, and not via carbon exchanges such as the American Carbon Exchange (ACX) or the Australian Xpansiv platforms. These transactions are often not accompanied with any public record, making their tracking immensely difficult.