The bans on Russian oil will lead to supply disruptions in Europe. In January, about 750,000 b/d of Russian crude oil was supplied through the Druzhba pipeline network to various oil refineries in Europe.

The oil refineries in Europe have historically been highly reliant on Russian crude oil. But in the wake of Russia's invasion of Ukraine, the West—principally the United States and most of Europe—is engaged in economic warfare with Russia. As part of this effort, the United States and the United Kingdom have already announced bans on Russian oil market. Moreover, many Western oil companies are "self-sanctioning" by refusing to lift Russian oil. We expect these developments will lead to Russian crude oil supply disruptions to Europe.

In the first 11 months of 2021, the EU27 imported about 2.2 MMb/d of its crude oil from Russia, which accounts for about 25% of the EU27 crude oil imports. The Druzhba pipeline network supplies Poland, Germany, Czechia, Hungary, and Slovakia with crude oil. Currently, supply through this network is flowing well. But what would the potential implications be in a scenario in which the system was fully shut down? Figure 1, drawing on our midstream database, identifies the relevant supply routes along with connecting terminals and refining infrastructure. 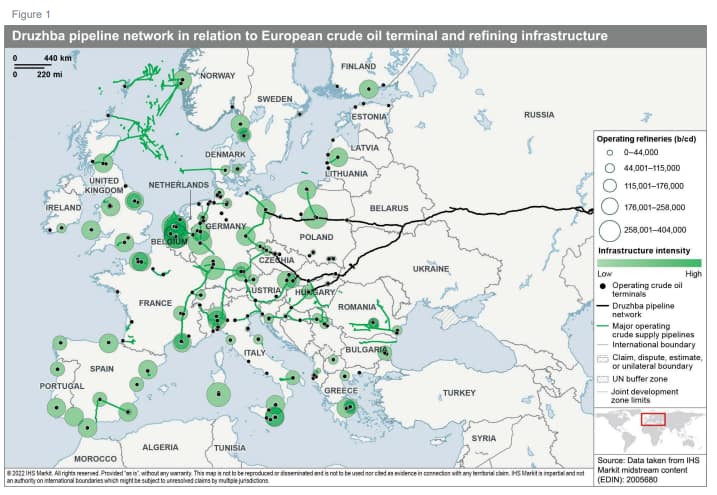 As of January 2022, about 750,000 b/d of crude oil was supplied through the Druzhba network, with the majority of the crude oil going to Germany (50%), followed by Poland (16%), Slovakia (13.5%), Hungary/Slovenia (11%), and Czechia (9.5%). This number can be compared with a high month (June 2018), when the flow was about 1.03 MMb/d. If the full Druzhba pipeline system was shut down, there would be a sudden shift to waterborne supply, dramatically increasing the utilization at European ports.

In January 2022, Poland imported about 188,000 b/d and Germany 378,000 b/d of crude through the Druzhba pipeline network. Between February and March 2022, Druzhba flows are understood to be falling by about 90,000 b/d as Poland's PKN Orlen has secured more Saudi crude. The alternative supply routes to connecting refineries would be via the crude import terminals at the ports of Gdansk (Poland) and Rostock (Germany), a scenario that could push connecting pipeline capacities to a maximum. In a high-refining margin environment, refineries connected to the Druzhba pipeline network in Poland (the Gdansk and Plock refineries) could run at about 560,000 b/d. These two refineries utilize both the Druzhba network and the Gdansk import terminals for their crude oil supply. The crude oil import terminals at the Gdansk port are directly connected to the Gdansk refinery. Via the Gdansk-Plock pipeline, a supply route with a capacity of about 600,000 b/d, the Plock refinery gets some of its crude oil from the import terminal. In terms of crude types used, Russian Urals has been dominant, but the Gdansk import terminals can also import diverse crude types from places such as the North Sea, Saudi Arabia, Canada, the United States, Latin America, and North and West Africa.

There is some precedent for at least a notable reduction in crude oil supply via Druzhba. In 2019, crude oil supply through the Druzhba pipeline network declined 20% when it was found that Urals crude was contaminated by organic chlorides. As a result, both refineries dependent on the Druzhba network (Schwedt and Leuna) faced slowdowns but managed to mitigate the impact through supplies via the ports of Rostock (Germany) and Gdansk (Poland). The Schwedt and Leuna refineries would ideally run at around 410,000-420,000 b/d in an oil high- refining margin environment. However, the pipeline capacity between the Rostock port and the Schwedt refinery is only 140,000 b/d. This leaves Leuna's crude supplies very dependent on Russian supplies via the Druzhba pipeline network.

The Plock, Schwedt, and Leuna refineries could call on roughly 710,000 b/d with a combined pipeline capacity of about 740,000 b/d. This scenario is likely to be very tight when adding 200,000 b/d for the Gdansk refinery on the Polish coast, adding a total of more than 900,000 b/d, making utilization of the Nafoport terminal in Gdansk very high.

With the Oil Terminal Analytics (OTA) global benchmarking tool for crude, refined products, and LPG/NGL terminals, we can assess the suitability of the Rostock and Gdansk ports as alternative crude oil import hubs if the Druzhba pipeline system was shut down (see Figures 2 and 3). 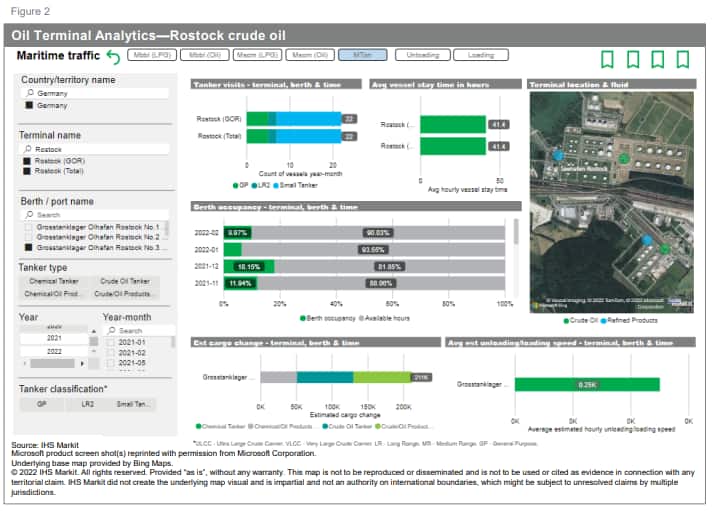 In Rostock, crude oil handling capacity would be limited as only one tanker berth in the port accepts crude oil (Grosstankanlager Olhafen Rostock No. 3). Moreover, Long Range (LR) 2 vessels are the maximum size accepted by the berth, placing limitations on crude unloading volumes by vessel. Size limitations mean more vessel visits to obtain consistent supply. However, low rates of berth occupancy over recent years suggest there is the capacity to transport greater volumes through the berth and onward to the Schwedt and Leuna refineries.

In Gdansk, there are four tanker berths that can handle crude oil, including two that have accommodated very large crude carriers (VLCCs). In Gdansk, too, berth occupancy is not a major concern, with historical data from OTA showing capacity to transport greater volumes through all berths, stemming from historical use as a crude oil exports terminal. Average unloading speeds per hour are also higher than at Rostock, while average vessel turnaround times are shorter, suggesting greater operational efficiency at Gdansk. However, if Russia or the European Union should decide to shut off the Druzhba pipeline network, probably both routes would have to be utilized to the maximum extent possible, assuming that the operating companies can secure the necessary waterborne crudes in what will be a tight market. 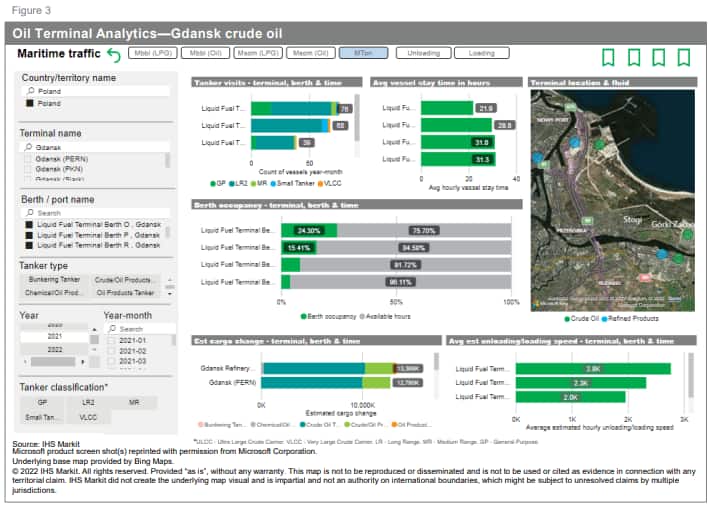 The Adriatic pipeline systems should have the spare capacity to ramp up imports of waterborne crude in case of a full Druzhba pipeline system shutdown. The Adria crude oil pipeline system, starting at the Omisalj terminal in Croatia, is rated at 480,000 b/d and would support refineries in Croatia, Serbia, Hungary, and Slovakia. There may be limitations to the transit capacity from Croatia to Hungary and Slovakia, but sustaining at least 75% utilization in Slovakia and Hungary should be feasible from a pipeline perspective.

The maximum observed flows on the Transalpine (TAL) pipeline system, which originates at Trieste, have been around 930,000 b/d. If all connected refineries were operating at a 90% utilization rate, that would call on 960,000 b/d via TAL, which should be feasible, again assuming alternative crudes can be secured in the Mediterranean, for instance diverting Middle Eastern spot barrels from Asia or maximizing West African inflows as well as volume flexibility on term contracts. Figure 4, drawing on the midstream database, illustrates key capacity information along crude oil transportation routes (ports, terminals, storage, pipelines) and related processing facilities (refineries). 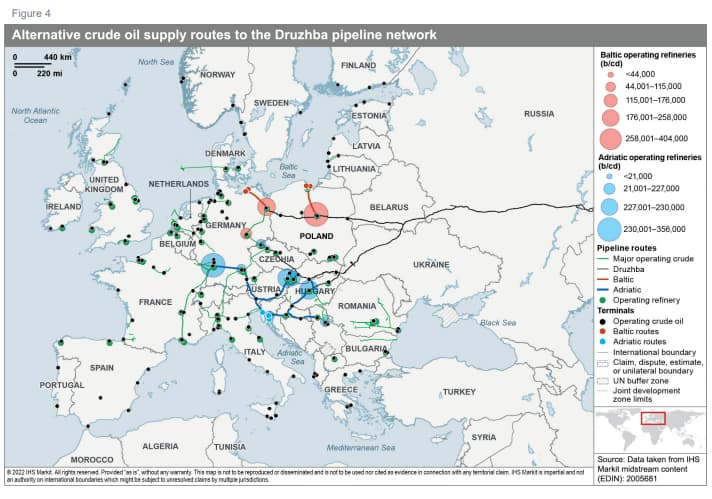 This insight comes from several IHS Markit products including: