In just 12 months, the global bunker fuel specific reduces from maximum 3.5% sulfur to maximum of 0.5%. Neither the refining nor shipping industry appears to be prepared for this, which would result in significant oil market disruption. The recently published IHS Markit study, Navigating Choppy Waters, has just been published. Detailed, granular analysis revealed the following:

As a result, the IMO 2020 scramble is unlikely to be calm for oil markets, and careful navigation will be required by anyone exposed to oil markets and freight rates.

In late 2016, the International Maritime Organization (IMO), a specialized agency of the United Nations (UN) devoted to the safety and security of shipping and marine pollution, announced that beginning on 1 January 2020, the maximum sulfur content permitted in marine bunker fuel will be reduced from 3.50% by mass (m/m) to 0.50% m/m on a global basis. The IMO sulfur content regulations will have a very significant impact on both the refining and shipping industries with knock-on impacts in other commodities and industries. 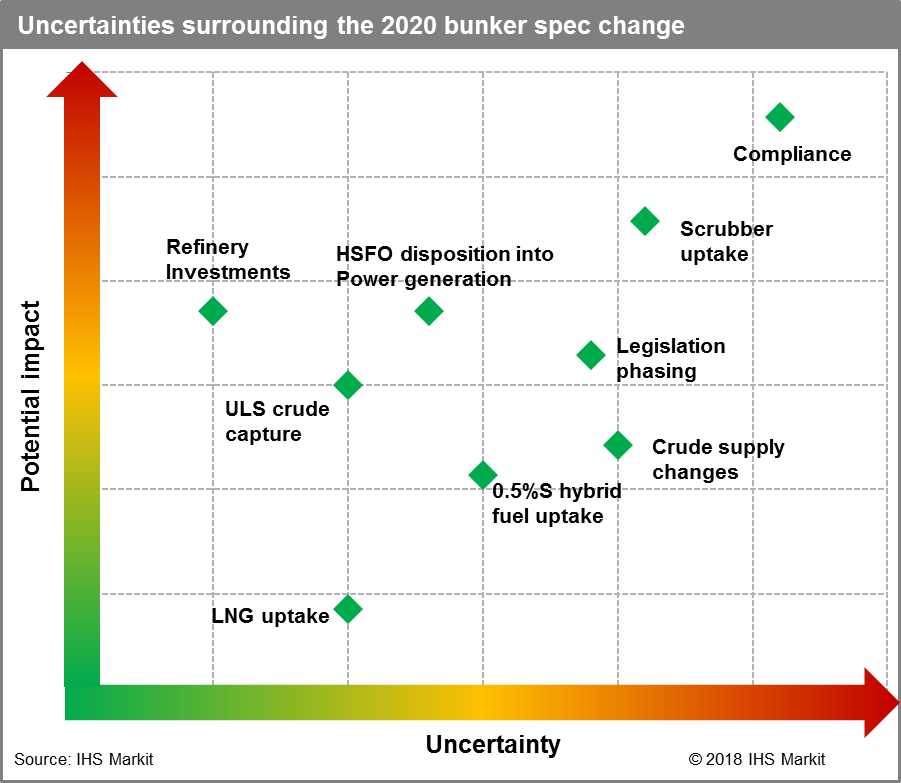 The refining industry will have to alter its current product slate, increase the supply of low-sulfur fuels and manage excess supply of high-sulfur fuels. In the years immediately following the implementation date, the light-heavy oil product price spread will spike and refining margins will rise, particularly for complex refineries.

Shipping companies will have to choose between one of three main pathways if they are to comply with the sulfur cap: switch to purchasing low-sulfur bunker fuel, install exhaust gas cleaning systems (scrubbers), or switch to LNG.

With only 12 months remaining until the specification change there is a great deal of uncertainty remaining, the most significant of which is the level of compliance with the new regulations. Not only is it difficult to enforce compliance in the open seas, but there is also uncertainty over whether sufficient supplies of compliant bunker fuels will be available. Moreover, various countries with a coastline are not signatories to the IMO treaty, and it is unclear to what extent they will enforce the new regulations. As a result of this uncertainty, both the shipping industry and the refining industry have been slow to make the investments required for smooth adoption of the IMO sulfur cap regulations. This will likely induce a "scramble" around the 2020 implementation date.

IHS Markit has just completed a major study, Navigating Choppy Waters, into this implementation, the three key findings of the study are:

1- Granular refinery analysis by IHS Markit indicates that in 2020 50% of the new VLSFO (the new very low sulfur fuel oil - 0.5% sulfur) bunker fuel will come from non-distillate refinery streams, with the other 50% coming from distillates.

IHS Markit carried out refinery-by-refinery analysis using our global refinery modelling system to understand the likely producers of VLSFO based on crude processed, capability and economics. We also used our ship tracking to assess demand and create the VLSFO and HSFO balance for each region (which are anonymously shown in the figure). 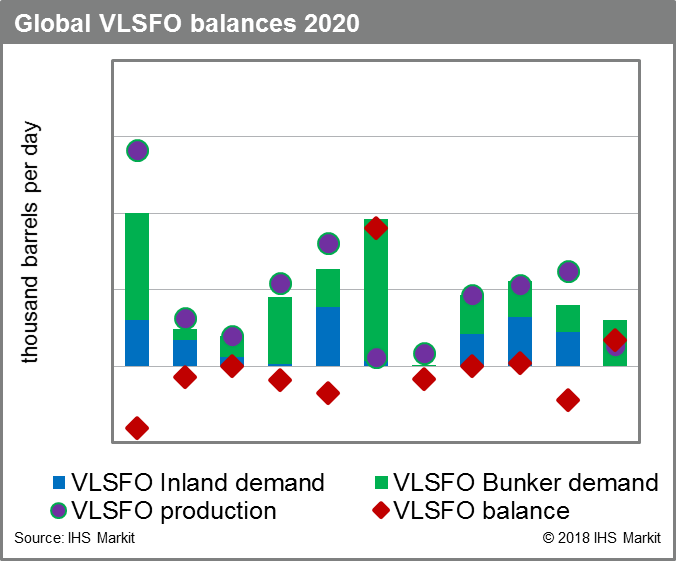 IHS Markit analysed seven alternative scenarios as well as a basecase. The scenarios included all the key uncertainty variables for the transition, such as high and low compliance, high and low scrubber installation, refinery project delays and phased implementation in 2020. The figure on the right shows the output from some of these scenarios on the global light-heavy differential. The pricing granularity was quarterly through 2019-21 to study the dynamics of the transition.

The analysis confirmed the sensitivity of the market impact to changes in some of the variables, and also which variables are the most significant and need to be most closely monitored through 2019.

IHS Markit then completed Monte Carlo probability analysis to gain an understanding of the range of impacts and distribution. The analysis confirmed there is a considerable range of potential outcome, albeit with a skewed distribution, and that considerable market disruption is the most likely outcome. 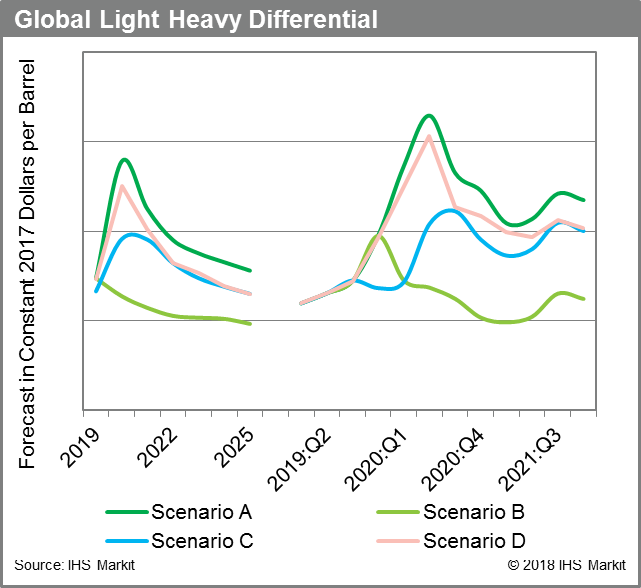 In the study IHS Markit also analysed the impact on global freight rates and other markets. We found that a two-tier freight market might develop, with VLCC for ships without scrubbers being up to $10,000 per day lower. The potential impact of the IMO scramble on Group 1 baseoils (used to make lubricants) was also found to be particularly significant, because their by-products tend to be high in sulfur. All-in-all, the IMO 2020 scramble is unlikely to be calm for oil markets, and careful navigation will be required by anyone exposed to oil markets and freight rates.

This blog is a summary of some of the key findings from the IHS Markit Navigating Choppy Waters study www.ihsmarkit.com/imo2020