IHS Markit: The United States remains the world’s most attractive market for renewables investment while India breaks into top five

IHS Markit Global Renewables Markets Attractiveness Rankings, which tracks investment attractiveness for non-hydro renewables (offshore wind, onshore wind, and solar PV) saw the United States retain its spot as the most attractive market overall, as well as for onshore wind and solar PV. The market also ranked 3rd (4th in the previous rankings) for offshore wind on the back of a new aggressive 30 GW by 2030 target, growing investor interest, and the possibility of grid modernization and expansion under the president's new infrastructure package which could rapidly unlock growth along the country's eastern seaboard

The ranking evaluates each country on the basis of seven subcategories that include the current policy framework, market fundamentals, investor friendliness, infrastructure readiness, revenue risks and return expectations, easiness to compete and the overall opportunity size for each market. Each market is scored in individual categories for solar PV, onshore wind, offshore wind, and an overall renewables score is calculated.

The overall country rankings are based on a combined score for offshore wind, onshore wind and solar PV that weights the different technologies based on their expected levels of installations over the next decade. 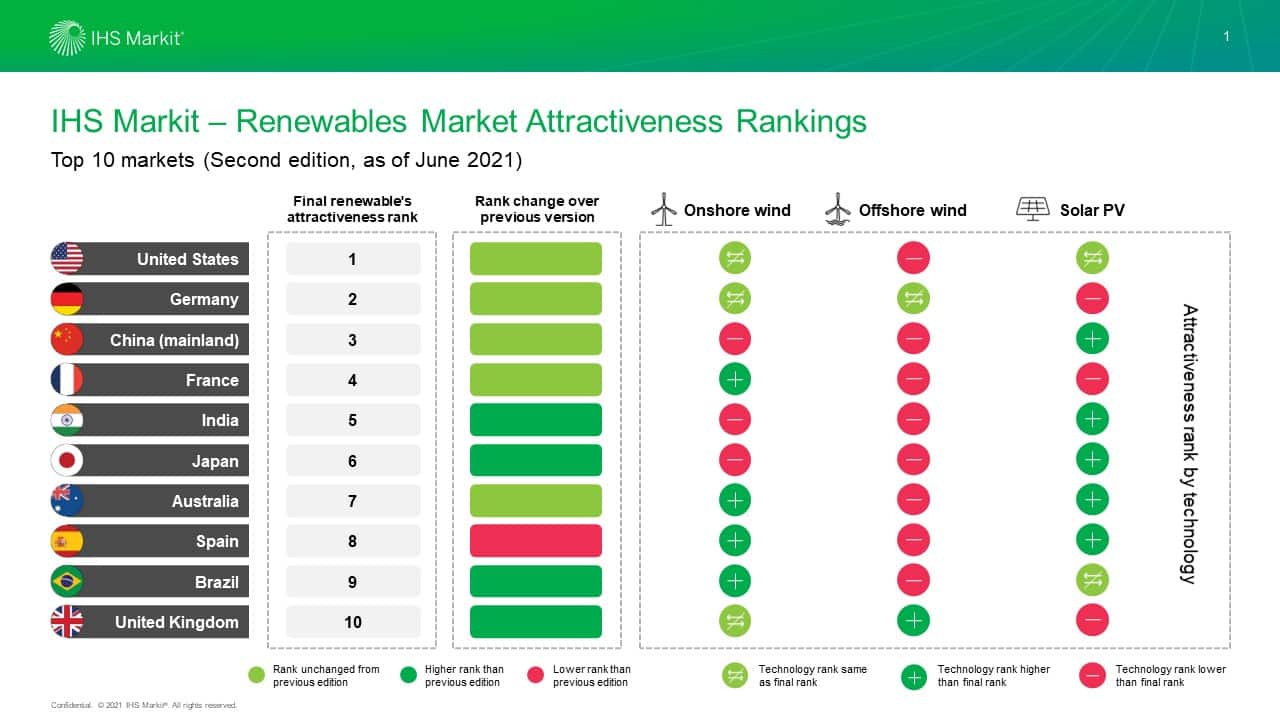 Various factors including strong fundamentals, attractive market sizes, and previous track record in driving renewables growth enabled Germany (Rank 2), mainland China (Rank 3), and France (Rank 4) to hold their ranks. These factors were crucial in counterbalancing the impact of expiring central subsidies and rising commodity costs on the wind and solar sectors in mainland China which is expected to hinder the market's momentum in the short term.

India's quest to improve utilization rates of their clean energy assets has resulted in over 7 GW of renewable hybrid projects being tendered off till date and was an important driver for the market breaking into the top five most attractive markets globally. The highly competitive market which has among the lowest wind and solar tariffs globally also saw ceiling tariffs removed for wind which helped improve economics and tender participation rates, also resulting in India ranking as the 6th most attractive market for onshore wind (from 9th in the previous ranking). In stark contrast, mainland China dropped to 9th spot (from 8th in the previous rankings) in the offshore rankings as the subsidy phase out forces projects to compete at the prevailing coal tariff from 2022 onwards.

The ten most attractive markets span all continents, demonstrating a broad interest in in renewable technologies across geographies, economic and political environments, and power market frameworks. As more markets rethink their decarbonization goals and define clear execution pathways, there has also been significant reshuffling in the lower spectrum of the rankings. Prominent examples include Taiwan (12th spot, up by 1 position) which grew its yearly offshore wind allocation plan by 50%, and Poland (14th spot, up by 4 positions) where mechanisms for awarding offshore wind projects was rolled out and a new proposal to ease siting hassles for onshore wind projects was submitted.

The United Kingdom reinforced its multi-technology focus by officially re-including onshore wind and solar into its clean energy auctions, climbing to the 10th spot by displacing Netherlands whose new auction mechanism offered a higher potential remuneration to solar than onshore wind.

The COVID-19 crisis has significantly impacted power consumption, which then manifested as an additional driver to reduced energy volumes offered in renewable auctions that are tied to anticipated demand growth, like in Brazil. Even so, renewables have fared well despite the crisis with a surge in bilateral PPA's offsetting the impact of reduced auction appetite, with Brazil climbing to rank 9 (up from 10th in the previous ranking).