The year 2020 witnessed several majors announcing plans to reduce greenfield exploration as they seek to rationalize their portfolios and transition to alternative energy sources. Nevertheless, exploration is continuing throughout the globe with several key wells planned for 2021.

There remains a thirst for exploration across all regions, and this, coupled with companies focusing on maximizing economic recovery from their existing assets, points towards this durable industry rebounding back to the optimism shown just before the coronavirus disease 2019 (COVID-19) pandemic. However, much uncertainty remains with regards to the pandemic and in turn when some normality will resume. The investment decisions to drill some of these higher risk wells will remain fluid, largely based upon budget priorities, nevertheless we have adopted a realistic approach in our outlook as to the timing of these wells going ahead.

We will be entering 2021 with the oil price at similar levels to what was seen between 2000 and 2004 as well as the most recent crash from 2015 to 2017 but during these downturns the industry has experienced some of its biggest and most important discoveries over the last two decades.

In the early 2000s we witnessed some huge discoveries across the CIS region (Yoloten, Kashagan, and Sulige) and the Middle East (Yadavaran and Ghazal) ,Latin America (Buzios,Mero and pre-salt), and the same again between 2015 and 2017 with the discovery of Zohr in Egypt and Liza in Guyana, different regions, similarly impactful discoveries (Figure 1). Moving into 2021, we will see a mixture of play openers and also spuds in 'hot areas' of exploration which could be as impactful as in previous downturns. 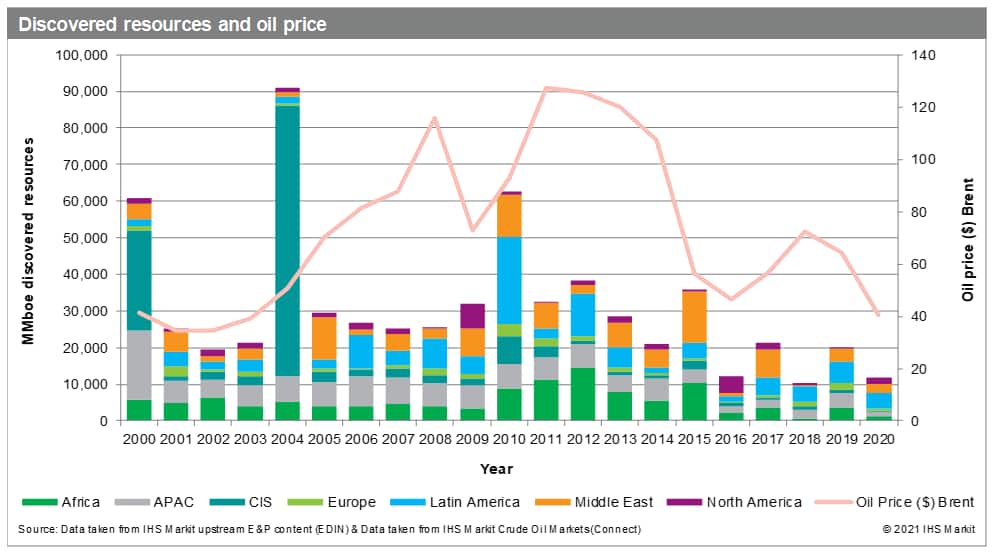 IHS Markit estimates a total of 38 High Impact Wells (HIWs) being drilled in 2021. Latin America is likely to see the most of any region with exploration continuing in the hot-spots of Guyana and Suriname and the pre-salt targets offshore Brazil. Further HIWs can be seen in Central America with HIWs planned in Mexico, Jamiaca, Honduras and the Bahamas.

In Europe, there are two planned HIWs in the Barents Sea where the search for a giant discovery continues, and four wells in the Eastern Med area which has been another region of focus for exploration with huge carbonate gas discoveries made in recent times.

This focus on this area extends to the Middle East where we will see a well in Lebanon. Africa is likely to play host to between six to eight HIWs in 2021 targeting well over 10 Bboe in place. Two of these wells have the potential to be basin openers and six play openers, all targeting prospects with in-place resource exceeding 1 Bboe.

In Asia-Pacific, there is potential for six wells to spud. With half of these focused on proven plays in emerging basins, the other half are testing unproven plays in frontier basins.

Finally, in Frontier North America, East Canada could see two HIWs drilled in 2021,one of the prospects having the potential to be a super-giant. This is a snapshot of our more comprehensive High Impact Well Report, available to customers of our Global Exploration & Production Service (GEPS). Learn more about our upstream intelligence offerings.

Jack Rivers is Director of Global Content on the upstream energy team at IHS Markit.

RT @SPGCI: Conversations at COP27 prove that renewables (solar, wind, +) have made significant progress in the energy mix. We will find bal…