With no end in sight for the ongoing conflict in the Ukraine, energy markets around the world look forward nervously as winter approaches. Policymakers continue to face a delicate balancing act of bolstering supply security, calming price volatility, and attracting new investment while strained supply chains, inflation, and the risk of economic contraction loom. Despite the complex set of near-term challenges, power sector stakeholders continue forward with the energy transition and seek ways to strengthen the reliability and flexibility of power systems.

The following reports showcase the power crisis in Europe, the US decarbonization pathway, flexibility resources complementing wind and solar, and China's continued growth in renewables.

Europe is facing an energy crisis, with forward prices for winter 2022/23 delivery having recently surpassed €1,000/MWh—four to five times the prices experienced on average last winter. Such high prices are driven by both the gas market crisis and a power market crisis: gas plants are the price-setting technology, leading to surplus profits of low-marginal cost generators and surging electricity costs of end users. Clients can view the detailed discussion in the IHS Markit Insight What is driving record European power wholesale prices?

The soaring power prices have triggered a reorientation of strategy. On 30 September 2022, the European Commission approved an emergency regulation of an inframarginal price cap on all the market arrangements. This policy regulation followed the European Commission's preliminary agreement on 9 September 2022 to cap revenues earned in the power market. According to the IHS Markit Insight Assessing the impact of the proposed European cap on revenues of inframarginal power generation technologies, by implementing the price cap, the price-setting marginal plant—typically gas—will have less impact on the revenues of low-marginal cost generators, known as inframarginal plants. The cap is set at €180/MWh, while member states will be able to decide on a cap above this benchmark. The excess revenues will be allocated to finance measures EU governments plan to take to assist final users in lowering their bills.

While a detailed plan has been laid out for the inframarginal price cap, a price cap for gas is still under planning. The IHS Markit Insight Assessing the unintended consequences of extending the Iberian gas price cap on power to Europe analyzed the impacts of such a cap on gas use in power generation. The research showed that as power prices currently sit in the range of power demand destruction, lowering power prices creates the need for additional generation. In addition, a gas price cap would lead to a removal of locational scarcity signals, burdening regions with lower gas availability.

In response to record-high power prices, power demand across Europe has dropped significantly. The aggregate demand of 10 European countries, including Germany, France, and the United Kingdom, is at its lowest level since late summer 2020. Looking ahead, power demand destruction could accelerate with GDP growth slowing down, new demand reduction objectives via government-driven auctions, and voluntary demand reduction initiatives. Clients can view the detailed discussion in the IHS Markit Insight Is Europe on the brink of a power demand destruction derby?,

The recently enacted Inflation Reduction Act (IRA) has set the trend for deep decarbonization of the whole economy as well as net zero in the US power sector with various clean energy incentives.

With the IRA's increased weight on decarbonization, wholesale power markets face challenges in continuing providing adequate incentives for resource investment and real-time performance. According to the IHS Markit Strategic Report The race to net zero: Wholesale power market design issues in a carbon-neutral US power industry, the increased role of low- or zero-variable cost renewable energy will make the accomplishment of these basic market goals even more difficult than it is today. As current power markets were designed before the deployment of significant volumes of zero-variable cost renewable energy generators and the consequential erosion of wholesale energy prices, a significant adaptation will be needed to maintain system reliability and control costs. (A public article on this topic is available here.)

As the IRA includes long-term tax federal credit extensions for wind and solar, as well as other clean energy technologies, there is now increased interest in prospects for US federal greenhouse gas (GHG) policy. The IHS Markit Market Briefing North American carbon pricing policies: States maintain the lead delves into details of the plan and provides overviews of state and federal GHG programs in North America. According to the report, a tax credit-focused policy represents a transition away from an explicit carbon price. The incentive-focused federal policy is also possible to be combined with a carbon tax to recognize the value of reducing carbon in wholesale markets.

Despite the impact of the IRA on economywide emissions reduction, it does not appear to put the United States on a path to President Joe Biden's 50% by 2030 emissions goal, nor an often-discussed target of net-zero emissions by 2050. In this case, the IHS Markit Strategic Report Fast Transition 2022: A pathway to net zero for North America presents a future in which the IRA provides a solid starting point and sufficient policy mechanisms are put in place to set the country on a pathway to net-zero emissions by 2050. The key findings feature declined energy demand and a dramatically transformed power sector in 2050 with increased electrification. (A public article on an earlier version of the Fast Transition case is available here.) 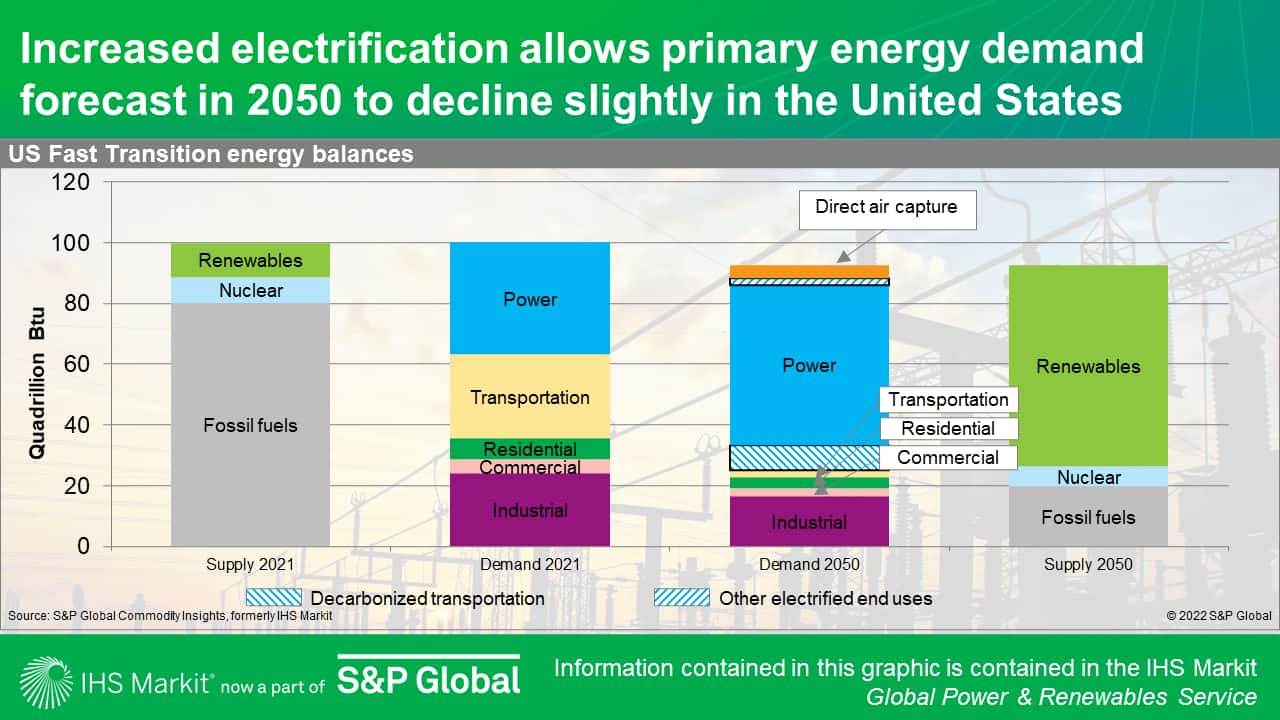 Against the backdrop of heightened net-zero ambitions, as wind and solar installations and grid connections accelerate globally, momentum is also building for increasing system reliability and flexibility. Efforts to ramp up flexibility resources like gas turbines and storage, nuclear energy, and carbon capture and storage (CCS) technologies as part of the net-zero solution are rising globally. In the European market, for example, energy storage technologies are important to limit renewables curtailment and load-following nuclear generation. 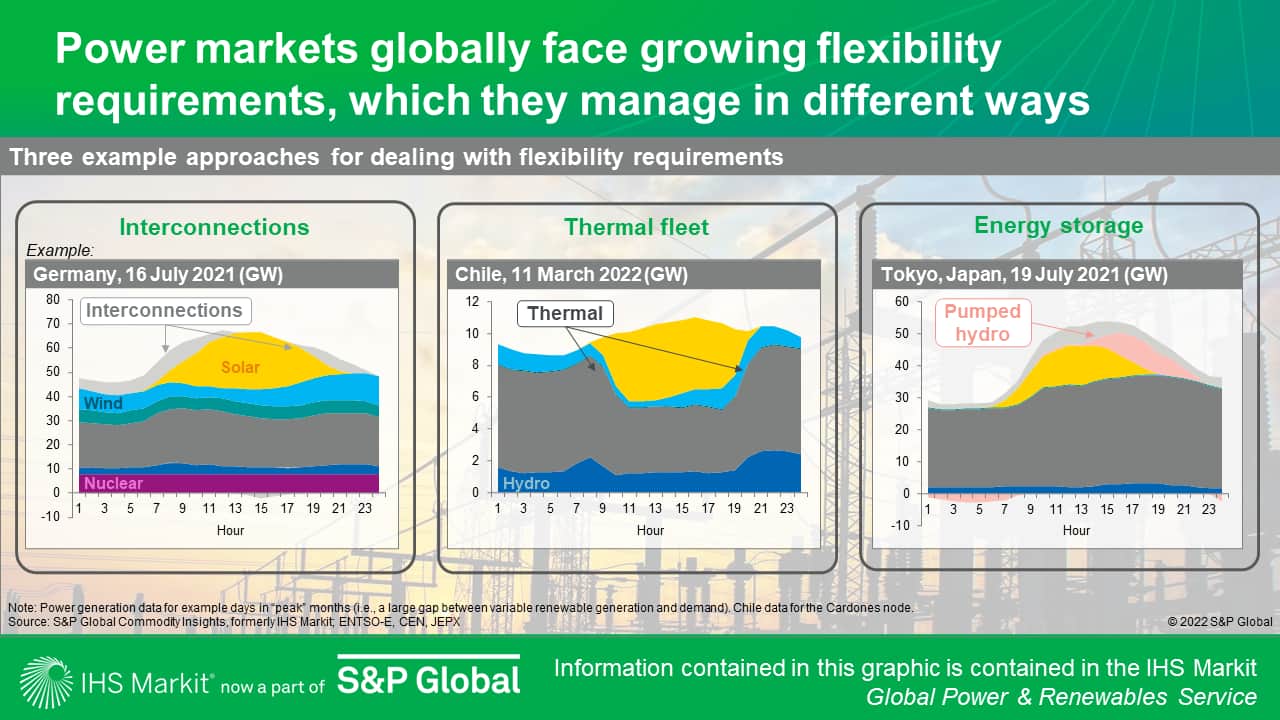 According to the IHS Markit Strategic Report Toward a reliable low-carbon power system: Navigating the evolving flexibility policy landscape, system reliability is the major concern for system operators as the world tries to move away from conventional technologies that have traditionally provided these services. A wide range of flexibility resources are required to help meet frequency regulation, operational reserves, and load-balancing requirements.

Such flexible power supply could be provided by clean energy sources such as biomass and geothermal, if strong market signals are in place for technology development, according to the IHS Markit Market Briefing Nonmainstream renewables: Options for clean, firm power. In Chile, the government is pushing to address the growing need for flexibility in the power system with notable legislation, including through energy storage and ancillary service, according to the IHS Markit Profile Chile Power Market Profile.

Nuclear as part of the net-zero solution is also gaining attention. According to the IHS Markit Strategic Report Global nuclear energy: On a growth track, nuclear power appeals to governments around the globe at a time of heightened concern for the energy transition and energy security. The report identifies modest growth of global nuclear installed capacity and a decreased share of production as retirement rises. There will also be a shift of nuclear power's center of gravity from North America and Europe to China as new build picks up the pace. Other countries are also working toward joining the nuclear energy club. According to the IHS Markit Insight South Korea's new electricity supply plan: Nuclear at the heart of the energy transition, South Korea plans to boost the long-term role of nuclear energy by increasing its share to one-third of electricity supply by 2030 from 27%.

Amid the global decarbonization trend, many developing nations still struggle with the heavy fossil fuel content in their energy portfolios. In India, coal is still at the center of the energy security strategy, challenging the country's net-zero target by 2070. According to the IHS Markit Market Briefing The costs of technological leapfrogging in the Indian power sector, India has to clean up coal's GHG emissions by implementing emissions control measures or ramping up clean technology alternatives like hydrogen and CCS to realize the 2070 net-zero emissions target.

As Asian spot LNG prices surged significantly compared with the coal and oil price equivalents following the start of the Russia-Ukraine conflict, the question is whether China will move away from gas and return to coal. According to the IHS Markit Insight China's energy policy of relying on domestic coal will not lead to a spike in carbon emissions in 2022 (viewable to clients) the move will be limited owing to market structure and regulation as well as reduced energy demand resulting from weak economic growth. Weak power demand and surging renewable generation, especially during March-May 2022, squeezed both coal and gas generation in China.

Despite supply chain bottlenecks and higher prices, renewables continued to grow in China. According to the IHS Markit Insight Growing pains: What struggles lie ahead for China's booming renewable-plus-storage market?, China has put forward aggressive mandates for new-build wind and solar projects to procure energy storage, which has been the major growth driver of China's battery storage market. This message of supporting co-located storage is clear from the 14th Five-Year Plan (FYP) and provincial competitive capacity allocation, but the cost and revenue challenge remain ahead. Following the release of the 14th FYP in June, China's provincial governments published local energy plans with details of capacity targets and project pipelines of renewable and flexible power, which are better forecast indicators than the national plan. Clients can view the detailed discussion of the provincial plans in the IHS Markit Insight Provincial renewable 14th Five-Year-Plan: Where are the hot spots for renewable energy?