As the conflict in Ukraine extends, energy markets around the world continue to ratchet up emissions reduction targets, not only to mitigate climate change but also to improve energy supply security. Despite the recent drop in European gas prices, policymakers continue to face a delicate balancing act of bolstering supply security, mitigating price volatility, and attracting new investment while strained supply chains loom. Amid the complex set of near-term challenges, power sector stakeholders continue forward with the energy transition and seek ways to utilize low-carbon fossil fuels to strengthen the reliability and flexibility of power systems.

While recent events surrounding the Russia-Ukraine war have pushed spot coal and gas prices to record highs, state regulation and planning has been in place to protect both residential and industrial consumers.

The IHS Markit Client Event European Gas, Power, and Clean Energy virtual Energy Briefing, October 2022—Europe's energy crisis: The state steps into energy markets as winter looms! offers a short-term outlook of the European energy market (accessible to clients only). The European energy crisis has dramatically accelerated a shift in EU energy policy away from traded markets and toward state intervention, lasting beyond winter 2022/23. While a natural gas price cap did not make it into the 30 September 30 package, the governmental intervention in gas markets will have long-term impacts on the global demand for gas.

The recent softened gas prices were also reviewed during the Energy Briefing. We believe that the recent falls are a sign of the lack of flexibility to absorb excess supply when demand outturns lower than expected. At times of weak demand, gas prices could fall to oil switching levels (€120/MWh), but they are expected to remain above a firm floor of coal switching (€60-75/MWh) in the core winter months and stay above historical levels in the long run. Power prices will remain strongly influenced by gas prices and stay at historical highs until the middle of the 2020s. 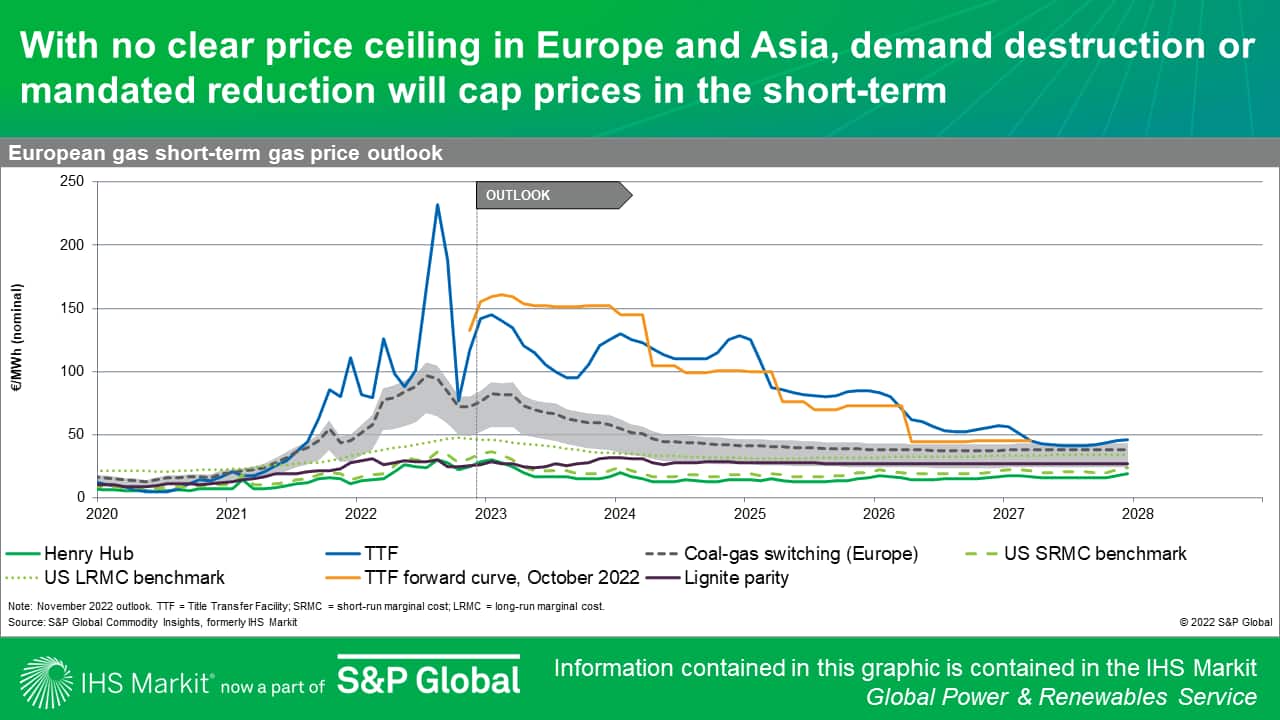 The energy crisis also solidifies Europe's decarbonization commitment. According to the IHS Markit Client Event European Gas, Power, and Clean Energy virtual Energy Briefing, October 2022—Medium-term outlook to 2030: Europe's decarbonization moves forward, REPowerEU boosts an already ambitious Fit for 55 road map. Further, this decarbonization commitment will translate into the European Union's higher power demand and renewable additions at the expense of fossil fuels, aiming for at least a doubling of the current renewable energy target with a focus on heat and transportation.

Outside of Europe, other power markets have also passed policies to address power affordability and the supply crisis. The IHS Markit Insight The energy crisis is reshaping power sector policies worldwide analyzes recent policy responses on the energy crisis around the globe. According to the report, policies addressing the energy supply crisis are common in fuel-poor or rapidly growing markets like Europe and mainland China, respectively, while the affordability crisis has been concentrated in liberalized markets such as Europe, Canada, and Australia and has led to state intervention in these competitive power markets.

Amid the unprecedented volatilities in the global energy market, countries around the world are making progress on energy transition policies toward various goals to improve supply security and meet ambitious emissions reduction targets.

The Inflation Reduction Act (IRA) in the United States will dramatically lower the costs of mainstream renewables, most notably solar via the shift to the more valuable production tax credit (PTC) versus the current investment tax credit (ITC) incentives. In addition to expanded state and utility ambitions on renewables, corporates also are eyeing renewable procurement strategies. Clients can view the detailed discussion in the IHS Markit Client Event S&P Global Commodity Insights New York Energy Briefing, October 2022: New Momentum Toward a Net-Zero Future—Part 2, Will the Inflation Reduction Act spark a new era for clean energy in the United States?(accessible to clients only).

Not only will the IRA dramatically accelerate conventional renewables additions, but it will greatly improve the economics of hydrogen production. According to the IHS Markit Client Event S&P Global Commodity Insights New York Energy Briefing, October 2022: New Momentum Toward a Net-Zero Future—Part 4, Firing the starting gun: Implications of the Inflation Reduction Act on low-carbon hydrogen production and use in the United States, green hydrogen will become the lowest-cost form of hydrogen when producers stack IRA tax credits. Along with the hydrogen infrastructure development boosted by the Bipartisan Infrastructure Law (BIL) hydrogen funding, US investment in hydrogen will boom.

The United States is also developing building decarbonization policies. While state and local governments are ramping up commitments to reduce emissions from the building sector, some worry that as most US power markets are summer peaking, a shift from summer to winter peak-load patterns will undermine grid reliability and capacity requirements. According to the IHS Markit Client Event S&P Global Commodity Insights New York Energy Briefing, October 2022: New Momentum Toward a Net-Zero Future—Part 3, Heating electrification: Will US markets shift toward winter peaking systems?, a hybrid gas-electric approach can help reduce space heating emissions in cold climates without driving up the winter peak demand. It also expands customer choices at a low cost and thus is preferable from a client perspective.

India released its new nationally determined contributions in early August with a long-term goal to attain net greenhouse gas neutrality by 2070. Following the passing of the bill, a remark by Power Minister Raj Kumar Singh raised questions regarding whether India will apply a blanket ban on exporting Indian carbon credits. The IHS Markit Insight Is it possible that Indian carbon credit exports to voluntary markets will be banned in the future?provides a deep dive into the applicability of a proposed carbon export ban with possible scenarios. The report concludes that India might be willing to forgo revenues from exporting carbon credits from its compliance markets but not from voluntary markets.

Nigeria's Energy Transition Plan was released in August 2022 as a pathway toward achieving the 2060 net-zero target. Financial support awaits to meet the targeted goal. According to the IHS Markit Profile Nigeria Power and Renewables Market Profile, the 2060 net-zero target requires $410 billion of additional investments over 40 years, and Nigeria seeks to raise the initial $10 billion support package ahead of the 2022 United Nations Climate Change Conference (COP27).

Volatile power prices, higher costs, supply chain bottlenecks, and geopolitical tensions are driving strategic shifts in the renewable industry. Volatile power prices as well as expanded incentives and targets have made regulated markets in the United States and Europe attractive for many investors. International expansion, perceived as the key to unlocking higher growth and better resources, has started pivoting to established markets with expanded incentives for others, which is driving significant asset rotation. Financing challenges are putting even more pressure on commercialization strategies to maximize revenue. Clients can view the detailed discussion in the IHS Markit Insight Global Power and Renewables Company Strategies: Policy push and geopolitical tensions keep tailwinds for renewables transactions strong.

The recent $6.8 billion sale by Con Edison of its Clean Energy Businesses subsidiary to RWE has underscored this trend among US utilities to develop low-risk profiles amid market uncertainty. According to the IHS Markit Insight Examining company strategies: Does recent M&A in the US power sector reflect an ongoing "shift to safety," or diverging strategies amid an uncertain market outlook?utilities across the United States are starting to deemphasize profitable but volatile business lines and pivot their focuses to low-risk and low-return regulated businesses. The buyer, RWE in this case, gains the potential future upside with improved project economics after the passage of the IRA and reduced volatility of performance with regional and technological diversification.

Southeast Asian governments are committed to clean energy by targeting more than 250 GW of solar and wind capacity additions over the next 20 years. However, challenges persist as electricity feed-in tariff (FIT) jumps and long-term planning policies await on the path to the proliferation of more renewable capacity. According to the recent webinar, Lofty renewable targets in Southeast Asia—How to attract more private investments?, the reduction of FITs has led to declined margins, while the succeeding pricing and awarding mechanism is still not in place. Despite the current financial constraints, innovative financial instruments like green bonds and loans, as well as future improvements in planning and policy, are gaining popularity and increasing renewables' attractiveness for investments.

Watch the full replay of the webinar. 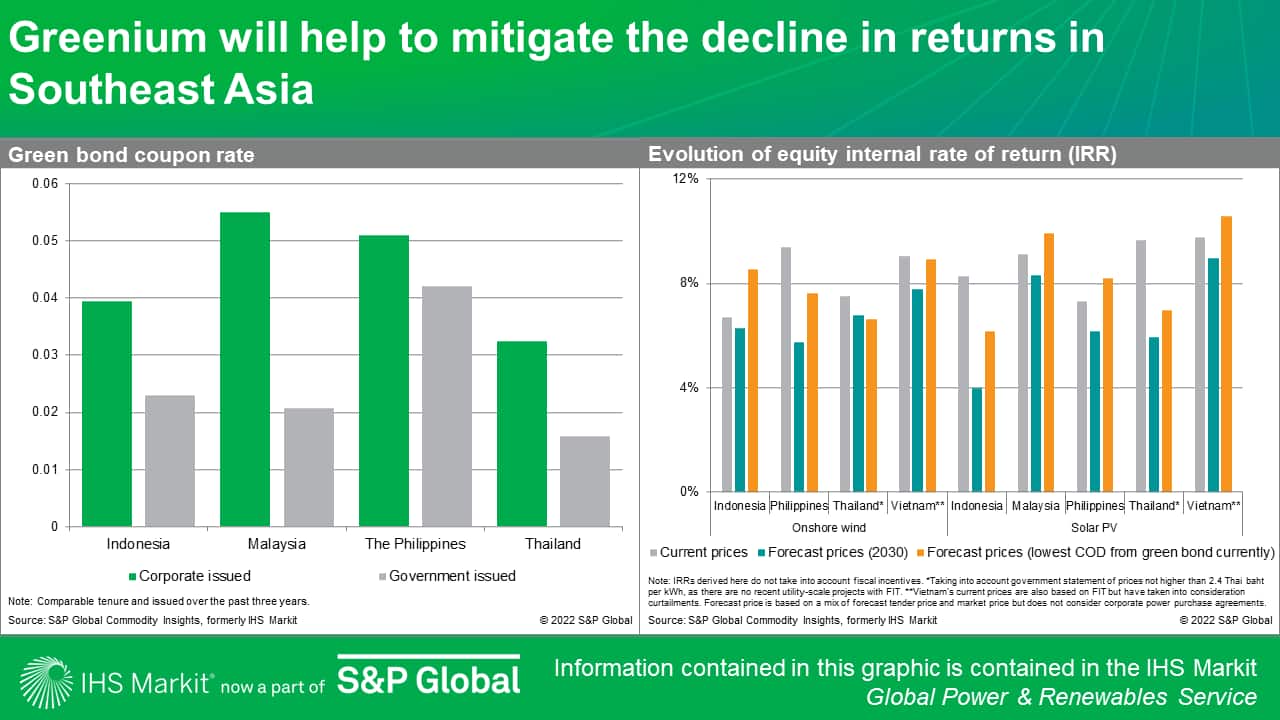 In Asia Pacific, corporate power purchase agreements (CPPAs) have become an increasingly popular channel of renewable power procurement by corporations. To date, IHS Markit estimates that a total of 19.2 GW of renewable capacity has been contracted by 798 corporations in the region. Direct PPA and solar photovoltaics (PV) are the most popular contract types, with India and Taiwan featuring the most active markets in second quarter 2022. Clients can see a more detailed discussion in the IHS Markit Insight Asia Pacific renewable corporate power purchase agreement, Second quarter 2022.

In Latin America, Colombia has commissioned its first wind project in more than a decade and will soon begin operating the largest solar plant in the country. The country's president, Gustavo Petro, has pledged to reshape Colombia's economic model, including a halt to the licensing of new areas for oil exploration and the promotion of renewables, according to the IHS Markit Profile Colombia Power Market Profile. Brazil has also just finished a general election with left-leaning Luiz Inácio Lula da Silva defeating Jair Bolsonaro to become Brazil's president again. According to the IHS Markit Profile Brazil Power Market Profile, wind and solar gained momentum over the past decade and are the main drivers of the system expansion in the country. Regulated power auctions are also slowing down as distributed generation and the free market continue to expand.

The new dynamics in fossil fuels

While many countries around the world are still on track with their long-term decarbonization ambitions to varying extents, they also keep supply security and economic growth top of mind. In the following decades, fossil fuels will play very different roles in many emerging and developed economies facing headwinds from soaring commodity prices in the global market.

In the United States, according to the IHS Markit Client Event S&P Global Commodity Insights New York Energy Briefing, October 2022: New Momentum Toward a Net-Zero Future—Part 1, The new gas dynamics, power sector gas burns will grow even as renewable generation continues to expand. The gas price will remain high over the next six months owing to coupling robust power sector demand and resilient exports. Henry Hub prices are expected to average about $7/MMBtu in 2022 and retreat toward the $4-5/MMBtu range in 2023-25. A slowdown in domestic demand growth in 2023 and 2024 will ease pressure off gas prices. The ramp-up in new LNG export capacity in 2025 should begin to lift gas prices in 2025 and beyond.

Qingyang Liu is a research analyst for the Global Power and Renewables team at S&P Global Commodity Insights.